The title of this article is ambiguous. Further meanings are listed under 1600 (disambiguation) .

After conquering Transylvania in the previous year, the Wallachian prince Mihai Viteazul also succeeded in conquering the Principality of Moldova in May . He drives out the Moldovan voivode Ieremia Movila, who has maintained friendly relations with Poland and the Ottoman Empire . He fled to Poland. Mihai's rule, which was dependent on imperial subsidies, collapsed in autumn when Polish armies under the crown hetman Jan Zamoyski conquered Moldavia and Wallachia , and defeated the Mihais' associations together with a Habsburg army under Giorgio Basta on September 18 near Mirislau (Miriszló) drive out of the country.

The up 1,629 permanent Polish-Swedish war begins. The occasion is the claim of the Polish King Sigismund III. Wasa on Estonia, which is under Swedish rule . After losing the Swedish crown, King Sigismund managed to win over the leading aristocratic circles in Poland-Lithuania for a campaign in Estonia. However, the Swedes anticipate the Polish-Lithuanian attack and go on the offensive themselves. During the year 1600 penetration of Estonia from Swedish troops under the leadership of the Regent Duke Charles of Livonia and occupy the cities of Tartu and Parnu . The Swedes advance to the Daugava River and begin the siege of Kokenhusen Castle east of Riga . However, Duke Karl did not dare to attack the heavily fortified Riga. In view of the Swedish successes, the Sejm approves the funds to raise an army of around 20,000 men. Under the leadership of the Grand Hetman of Lithuania Krzysztof Radziwiłł , this force is advancing to Livonia. 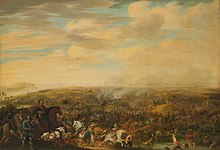 In the Battle of Nieuwpoort in the Eighty Years' War on July 2, the army of the Republic of the Seven United Provinces under Moritz of Orange defeated the Spaniards under Albrecht VII of Austria . However, the battle has no other effects. The Dutch lines are overstretched and Moritz von Orange will soon have to withdraw with his troops as well. The Flemings , whose support he was hoping for, remain on Spain's side . In addition, the great port of Dunkirk , the main target of the campaign, is beyond its reach in Spanish hands .

Title page of the first quarto 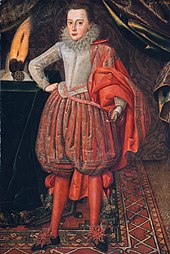 The young Charles, portrait by Robert Peake, around 1610