Her life was determined by her affairs, her friendship with Anna of Austria and her hostility to Cardinal Richelieu and later Cardinal Mazarin , against whom she spun numerous unsuccessful intrigues and conspiracies. One of her lovers was the French writer François de La Rochefoucauld .

Marie de Rohan-Montbazon came from an old noble family who traced their descent to the pre-Roman princes of Brittany . Her father was Hercule de Rohan , Duke of Montbazon and Count of Rochefort-en-Yvelines , a confidant of King Henry IV. , Of the dignities of a peer of France , grand veneur de France and Governor of Paris and the Ile-de-France held .

Her mother, Madeleine de Lenoncourt , died when Marie was two years old. Together with her two years older brother, she grew up at Couzières Castle in the care of servants. The siblings were inseparable. Marie is said to have often worn her brother's clothes and to have passed the time with him and his friends riding, hunting and horse racing. 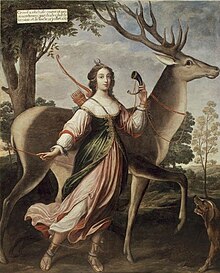 When Louis XIII. was married to Anna of Austria in 1615, Marie was chosen for the court of the young queen and caused quite a stir at the court with her enterprising spirit, her unbridled zest for life and her extraordinary beauty. After King Louis XIII's favorite at the time, Charles d'Albert, duc de Luynes , had become the most influential man in France with the successful coup against Concino Concini , he asked for her hand and took her as his wife on September 13, 1617. There were two children from this marriage:

King Ludwig was enthusiastic about the young woman, who like him was enthusiastic about horses, hunting and falconry, and made her the Queen's first lady-in-waiting after the birth of her first child. She quickly rose to become Anna's closest confidante. After Luynes death on December 15, 1621, she married Claude de Lorraine , Duke of Chevreuse, on April 21, 1622 . She had three daughters with him:

In 1625 she initiated a liaison between Anna and George Villiers, 1st Duke of Buckingham . In 1626 she and her lover, Henri de Talleyrand-Périgord , the Count of Chalais, were involved in a plot to murder Richelieu, which the cardinal was able to uncover. Chalais was executed and Marie exiled to Poitou . She withdrew to the Lorraine court and won Duke Charles IV for Buckingham's anti-French coalition. In 1628 she was allowed to return to France.

In 1633 she was exiled to Tours because she should have eavesdropped on her lover, the royal keeper of the seals Charles de L'Aubespine , Marquis de Châteauneuf, and betrayed state secrets to Spain. In 1637, when France was now at war with Spain, Richelieu discovered that Queen Anne was using her to maintain a treacherous correspondence with her Spanish relatives. The Duchess then fled to Spain. This time she was only able to return to France after the death of the king and cardinal.

But her relationship with the queen broke up because of her affection for Cardinal Mazarin , who thereby became a target for Marie's enmity. She participated in the Cabale des Importants to assassinate Mazarins and was exiled again, but at the beginning of the Fronde she returned and joined the party of the Prince of Condé, Louis II. De Bourbon, prince de Condé .

In 1652 she reconciled with the queen and finally withdrew from the political stage.

Marie's affair with Chalais is at the center of the opera Maria di Rohan by Gaetano Donizetti (1843). Her role in the affair between Anna and Buckingham also inspired Alexandre Dumas , who made her appear as the mysterious lover of his musketeers Aramis and Athos in The Three Musketeers .