The title of this article is ambiguous. For more people with this name, see La Rochefoucauld (noble family) 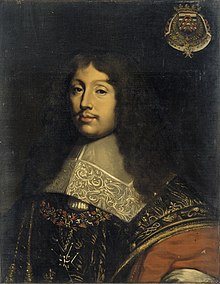 François VI. de La Rochefoucauld (born September 15, 1613 in Paris ; † March 17, 1680 ibid) was a politically active French aristocrat and military man who went down in history primarily as a man of letters. With his aphoristic texts he is considered a representative of the French moralists .

La Rochefoucauld came from an old noble family who had been raised from count to duke in 1622. Before he inherited the title of duke after the death of his father in 1650, he wore that of "prince [= prince] de Marcillac ". At the age of 15 he was appropriately married to Andrée de Vivonne. The marriage had eight children.

In 1629 he took part as an officer in a campaign under Louis XIII. to Italy part. After participating in a campaign against the Spaniards in the Netherlands, he was exiled to his estates because he had incurred Richelieu's displeasure. Also in the 1630s, under the influence of the Duchesse de Chevreuse, he took part in the unsuccessful intrigues of Queen Anne d'Autriche and the nobility against Cardinal Richelieu , which earned him a week's imprisonment in the Bastille in 1637 and his banishment from Paris. After the deaths of Richelieu (1642) and Louis XIII. (1643) he hoped for an influential post with the regent Anne d'Autriche, but came away empty-handed and had to see how she favored Cardinal Mazarin , who soon continued Richelieu's absolutist policy.

In 1648, under the influence of the Duchesse de Longueville , with whom he had an illegitimate son in 1649 , La Rochefoucauld took part in the Fronde , an armed uprising against Mazarin by the high judges of the Parliament , the people of Paris and the nobility. Here he played a role several times in negotiations between the parties, but also suffered major financial losses in the chaos of war. In 1652 he was fighting on the side of the Prince de Condé against Mazarin and the crown, wounded in the face and blind in one eye and withdrew to one of his country estates. As he was too proud to ask for his pardon after Mazarin's victory, he was declared without rights and fled to Luxembourg, Austria .

In 1653 he made his peace with Mazarin and the young Louis XIV , whom he always remained suspicious of. He came back to Paris and tried to improve his precarious financial situation. In order to process his disappointment after Mazarin's victory, he wrote the Mémoires , which ran from 1624 to 1652 and which appeared anonymously against his will in 1662 as a pirated print in Amsterdam and are an important source for the history of the Fronde.

In Paris he frequented court and aristocratic circles, but more often in salons, e.g. B. that of the Marquise de Sablé as well as in Jansenist- inspired circles, where one developed a new interest in the individual, his psychology and his behavior in view of the question of why one person is obviously chosen by God and the other is not. In 1658 La Rochefoucauld began to write shorter aphoristic reflections on the nature of man in general and the behavior of members of noble society in particular. In 1664 he published a collection of these pointed, mostly pessimistic, often sarcastic texts under the title Réflexions ou sentences et maximes morales .

Since the book sold well, he had new editions followed in 1666, 1671, 1675 and 1678, in which the number of "Sentences and Maximen" of approx. 300 to approx. 500 grew. The collection, which in literary history mostly goes under the simple title Maximes , thus became his main work. An anthology with various other texts came out under the title Réflexions diverses posthumously.

In 1671, La Rochefoucauld transferred his title of duke to his eldest son, who was chamberlain to the king. His later years were overshadowed by a severe gout disease and the loss of two sons in the war (1672). A close friendship with the novelist Madame de La Fayette gave him some consolation during this time .

La Rochefoucauld is one of the most important authors of the late 16th to 18th centuries who reflected on man and society and who are summarized in French literary historiography under the name "moralists" and for whom there is no counterpart in German literary history.

August Bohse's maxims were first translated into German in 1699 .