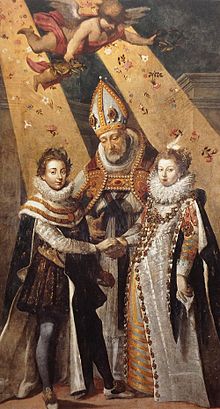 Marriage between Louis XIII. and Anna of Austria in 1615 (painted by Jean Chalette ) 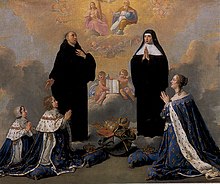 Her father was Philip III. of Spain , her mother Margaret of Austria . The Spanish King Philip IV was her younger brother.

On November 21, 1615 she was with the young French King Louis XIII. married in the Saint-André cathedral in Bordeaux. Maria de 'Medici , Ludwig's mother, had arranged this connection at the suggestion of her advisor Concino Concini . Anna and Ludwig XIII. were a couple that couldn't be more different: he preferred hunting, she was fond of theater, dance and the easy muse.

After three miscarriages at the beginning of the marriage made the hope of an heir to the throne seem hopeless, Anna was treated with disregard by Ludwig. Later, she was said to have affairs with high nobles, such as Henri II. De Montmorency and George Villiers, Duke of Buckingham , which is unlikely, however, since she was subject to strict social control as Queen.

As a Habsburg and devout Catholic, Anna was appalled when, at the instigation of Cardinal Richelieu France, in 1635 entered the war against Spain at the side of Protestant princes against the imperial-Catholic party of the Holy Roman Empire.

After twenty-two years of childless marriage in growing bitterness, Anna had a fateful encounter with her husband on December 5, 1637. The latter, who was actually on the way to his hunting lodge near Versailles , had to interrupt his journey due to a storm and stayed at the Louvre in Paris, where the Queen had set up for the winter. At that time, only those stately rooms in castles that were inhabited were heated. The king was forced to go to the only warm bedroom: that of the queen. Nine months later, Anna gave birth to her first healthy child on September 5th at the age of almost 37 years, the future King Louis XIV. Anna attributed the birth of her son to the work of St. Fiacre , which is why she went on a pilgrimage in 1641 to Saint-Fiacre . Two years later, on September 21, 1640, she gave birth to a second son, Philipp . This secured her position at court, and she no longer had to expect deportation to a monastery.

As happy as the king was about the birth of the ancestor, he was evidently jealous of his son's affection for his mother. He reproached her for taking this against him.

On December 4, 1642, the hated Cardinal Richelieu died . But the king's health also deteriorated rapidly. Before his death on May 14, 1643, he decreed in his will that it was not Anna who should exercise the regency for the still minor Louis XIV, but a Regency Council. However, it had the Paris Supreme Court, the Parlement , annul the relevant clause of the will and did away with the Regency Council. As the first minister she kept that of Louis XIII. Cardinal Jules Mazarin , who was also the godfather of the young king, was appointed as the successor of Richelieu .

Her first political decisions caused a stir. Instead of making peace with her brother Philipp, she continued the war against Spain after the French troops achieved a decisive victory in the Battle of Rocroi in the Ardennes on May 19, 1643 .

However, Anna and Mazarin, hated by the nobility and the people alike, were confronted with uprisings within France, for example the Fronde that began in 1648 .

Anna's reign officially ended when Louis XIV was declared of legal age in 1651 at the age of thirteen. Yet she and Mazarin continued to exercise power. In 1652, under pressure from the "Frondeure", Anna was forced to release Mazarin, who went into exile in Brühl near Cologne, but continued to advise her from there and was able to return in 1653.

After France ended its warlike activities in Germany with the Peace of Westphalia in 1648, it concluded the Peace in the Pyrenees with Spain in 1659 . When the peace treaty was signed on Pheasant Island in the Spanish-French border river Bidasoa , Anna saw her brother Philipp again for the first time since 1615. The meeting was rather cool, however, because Spain had to cede territories to France. After all, the marriage of her son Ludwig and her niece, Infanta Maria Teresa of Spain , was agreed upon at the time of the peace treaty , which took place in 1660. When, after Mazarin's death in 1661, Ludwig took over the affairs of state himself, Anna gradually withdrew from the court and lived mostly in the Val-de-Grâce monastery on the southern outskirts of Paris. On January 20, 1666, she died of breast cancer .

Anna was considered one of the most beautiful women of her time, she had "the most admired and countless times sung about hands of her time". She had a close relationship with her son Ludwig. When they were among themselves, he was not called "Madame", as is customary according to the etiquette, but "Maman". The two works Rodogune by Pierre Corneille (1644, publ. 46/47) and Gabriel Gilbert (1646), which they compare with the Parthian princess Rhodogune, are dedicated to her reign .