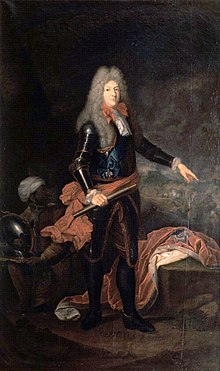 Painting of Duke Friedrich I of Saxe-Gotha-Altenburg, attributed to Christian Schilbach

Friedrich I was born the son of Duke Ernst the Pious of Saxe-Gotha and his wife Elisabeth Sophia of Saxe-Altenburg . He received his training from Hofmeister Joachim Bartholomäus Meyer, among others . When his father, who had ruled the Principality of Gotha as Duke of Saxony since 1640, also inherited the Principality of Saxony-Altenburg in 1672 , Friedrich I installed him there as regent. In 1674 his father, weakened by illness, gave him the business of government in all of his countries.

After the death of his father in 1675, Friedrich took over the successor in accordance with his father's will. However, he had to involve his six younger brothers in the government because his father did not want the country to be divided, but had not been able to decide to introduce the primogeniture because this de facto expropriation of the later sons contradicted his understanding of family behavior. Initially, all seven brothers held court at Friedenstein Castle , which only existed until 1676.

Thereafter, negotiations began to divide the paternal inheritance. This was finally carried out with the " main recipe " of February 24, 1680. Friedrich kept the offices of Gotha , Tenneberg , Wachsenburg, Ichtershausen , Georgenthal , Black Forest , Reinhardsbrunn , Volkenroda , Oberkranichfeld , Altenburg , Leuchtenburg and Orlamünde . The state formed from these offices was called Sachsen-Gotha-Altenburg. It consisted of three larger, non-contiguous areas around Gotha, Kahla and Altenburg as well as six smaller exclaves . The Friedenstein Palace, built by his father, continued to serve Friedrich as his residence. Friedrich used the Gotha division of the country in 1680 to relocate the Saalfeld district mint to Gotha.

Friedrich I tried to continue the works of his father. In order to prevent future division of the country, he introduced the primogeniture for his house in 1685 (confirmed by the emperor in 1688). From 1677 he built the Friedrichswerth pleasure palace in the village of Erffa, around 15 km from Gotha, which was renamed Friedrichswerth in his honor.

In 1683, Friedrich I founded the Gotha Palace Theater, which still exists today . He was also an avid journalist; His surviving diaries are among the most important princely personal testimonies of the epoch and prove a very extensive, also practical interest in alchemy . Frederick I took part in the relocation of Vienna when it was besieged by the Turks (1683) and in the Imperial War against France. However, he ruined the finances of his small country by building up a standing army that numbered 10,000 men when he died.

Friedrich I died in August 1691 while staying at his summer residence in Friedrichswerth and was buried next to his first wife Magdalena Sibylle, who had died ten years earlier , in the royal crypt of the castle church on the Friedenstein, which was built at his behest in 1679/80 . His eldest son Friedrich II succeeded him as Duke of Saxe-Gotha-Altenburg.

In the evaluation of historical studies, Friedrich I is at times portrayed as ostentatious, power-related and wasteful. This is often compared with his father Ernst I von Sachsen-Gotha-Altenburg (called Ernst the Pious). The historian August Beck openly assessed Friedrich as wasteful and not on a par with his father. Although Frederick I was more likely than the strict Ernst I. to build up a standing army and live out a lavish lifestyle typical of the time, he continued his father's reform course and continued to develop the legislation of the Duchy of Saxony-Gotha-Altenburg, but in the Basics based on the work of his father. He was able to do this because Ernst the Pious had initiated legislation that was already extremely progressive and foresighted for the time. So there was simply no need to break new ground.

Frederick I had married Magdalena Sibylle (1648–1681), a daughter of Duke August von Sachsen-Weissenfels , in his first marriage in 1669 . With this he had six daughters and two sons:

After the death of his first wife in 1681, he married again in the same year, Christine (1645–1705), daughter of Margrave Friedrich VI. from Baden-Durlach . His second marriage was childless.