Bad Düben (until 1948 Düben ) is a spa town in the district of northern Saxony . The town forms the starting point of the Düben Heath and lies on the right bank of the Mulde .

Bad Dueben is located on the south edge of the nature parks Duebener Heide , a predominantly covered with forest, in the glacial shaped moraine . The Leipzig lowland bay begins south of Bad Düben . The Mulde flows southwest of the city . Bad Düben is approx. 30 km northeast of the next largest city, Leipzig .

According to the current main statute, the town of Bad Düben consists of Bad Düben and the three districts of Schnaditz , Tiefensee and Wellaune . The village of Brösen is assigned to the Tiefensee district . The localities of Alaunwerk , to which the vineyard houses belong, and the hammer mill are no longer shown as such and belong to Bad Düben.

The name "Düben" is derived directly from the Upper Sorbian name Dźěwin . Name researchers are not sure about the origin of the name. The name can be derived from a personal name (“place of a Děva”) or from “děva” (virgin) or “dźowka” (daughter). It could also come from the Sorbian name Dzewin and mean something like the place of residence of the Dzew . The linguist Ernst Eichler and the name watchers Hans Walther keep the altsorbische dyb (for pole) as output for the name Dybno and deny the derivation from the word dub (oak).

In 1015 mentioned Thietmar of Merseburg the castle Düben for the year 981 as "urbs dibni" . 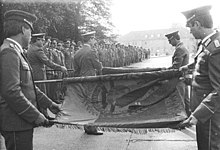 Two battalion flags of the Alaunwerk service unit were rolled up during a roll call on October 2, 1990, the evening before the takeover by the Bundeswehr.

Bad Düben has a history of more than 1000 years. Düben Castle was first mentioned in 981 under the Slavic name Dibni . The castle on the river Mulde is still the symbol of the city. Around 1200 Flemish immigrants founded the Neumark community next to the castle . Franconian and Saxon settlers took over Slavic farms in the area, and the town of Düben developed from this under the protection of the castle. In 1450, Düben Castle was completely destroyed in the nobility feud between the brothers Friedrich and Wilhelm of Thuringia . In 1530 the Electoral Saxon official residence Düben was established at the castle . The legendary legal dispute between the horse dealer Kohlhase and the lord of the castle von Schnaditz Günter von Zaschnitz, which Heinrich von Kleist took up in his story Michael Kohlhaas , was negotiated at the castle in 1533.

During the Thirty Years' War , King Gustav II Adolf of Sweden and Elector Johann Georg I of Saxony met there in 1631 to forge an alliance against the Catholic Emperor Ferdinand II . The allied Swedish-Saxon troops defeated the imperial troops under Tilly in the battle of Breitenfeld . During the Thirty Years War the city was sacked and destroyed several times. In 1813, Düben was Napoleon's headquarters for a short time . From there he ordered his troops to march to the Battle of Leipzig . After the Congress of Vienna in 1815, Düben was incorporated into the Kingdom of Prussia and part of the Merseburg administrative district of the province of Saxony ( Bitterfeld district ).

In 1816, according to Neumann's local dictionary of the German Empire, from 1894 Düben had 2,311 inhabitants. Together with Schwemsal , Bad Düben was a center of alum production in Germany. In 1869 the volunteer fire brigade was founded.

At the end of the 19th century, the town began to develop as a spa and bathing resort due to the moor and mineral water deposits in the area. On April 1, 1936, the previously independent community of Alaunwerk Schwemsal was incorporated into the city of Düben. After the Second World War , Düben first belonged to the state of Saxony-Anhalt and from 1952 to the district of Leipzig .

In 1948 the city of Düben was awarded the title of Bad . Bad Düben became a garrison town with two barracks. In 1974 the NCO School VIII was established , later renamed the Military Technical School of the Air Force / Air Defense Harry Kuhn , in which up to 2000 regular soldiers , but also professional soldiers and conscripts, were trained every six months until 1990 . The property is partially used by the Federal Police . The barracks in the Alaunwerk district, also known as Heide barracks , was the location of the 3rd Chemical Defense Battalion and the 3rd Detonometry and Reconnaissance Battalion of the NVA. From 1990 to 1996 it was the location of the NBC Defense Battalion 705 of the Bundeswehr . In the barracks, which was in 2004 film NVA by Leander Haussmann and 2011 the film The tower rotated. Plans are currently underway to set up a fun sports park.

Bad Düben has been part of the federal state of Saxony since 1990 .

The city ​​council was last elected for five years on May 26, 2019 and consists of 18 elected members, five of which are for the CDU, four for the citizenry, three each for the Free Voting Community, the SPD and DIE LINKE.

Details on the past elections

Bad Düben has had a town partnership with Diez (Rhineland-Palatinate) since 1991 .

The city of Bad Düben has two blue poles on a gold background as the city's coat of arms. Between the stakes is a lily with lime green leaves and a white flower. A blond angel's head with silver wings is attached above the coat of arms. The mantle ornament consists of tendrils in the form of flames.

The city coat of arms first appeared in 1705 as a so-called mercy coat of arms , which was given by the sovereign to some cities because of the great pillage and destruction in the Thirty Years' War. The blue posts on a gold background indicate that Dübens belongs to the Osterland (Margraviate Landsberg). The angel's head symbolizes the great ecclesiastical importance of Dübens. Over there was the seat of an archpriest under the Archdeaconate of Wurzen of the Diocese of Meissen . This administered the entire northwest part of the diocese up to the lower Mulde. The lily in the shield instead of the scepter should be interpreted with gracious domination . But it is also a sign of jurisdiction. The city was also the official seat .

The mud bath , inaugurated on May 10, 1915 , contributed to the fact that the city of Düben received the status of a health resort thanks to its mud spa . After the Second World War, a bathing commission visited Düben, approved the application after a resolution by the cabinet of the state government and the ministers of the interior of the then province of Saxony-Anhalt and on March 4th, 1948 granted the right to run the “bath”. Since then, the city has borne the title and called itself Bad Düben . The requirements for recognition as a health resort are checked every 10 years, and Bad Düben has been able to maintain the health resort status without interruption since it was granted. 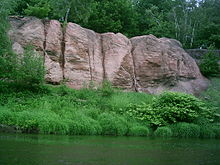 Pillar at the state border between Saxony and Saxony-Anhalt

The landscape museum of the Düben Heath is located on the castle grounds. A permanent exhibition has been showing interesting facts about the city's history, the natural environment and the craft since 1953. The mountain ship mill can also be visited in the immediate vicinity.

The Dübener Heide Nature Park House has been a guest, visitor and communication center since 2012, addressing the nature park, its special features in the area of ​​flora and fauna and the challenges facing future generations. There are also regular special exhibitions, lectures and readings.

Once a month there is the so-called evening singing or an oratorio concert (twice a year) by the Kurrende Bad Düben . The Kurrende (lat. Currere = to run, running choir) has existed since 1978 and the associated trombone choir since 1948, with a total of more than 80 members. The association is primarily dedicated to sacred choir and wind music. These include a. Four to eight-part motets by old and new masters, cantatas by Johann Sebastian Bach , Georg Friedrich Handel and Felix Mendelssohn Bartholdy , the Christmas Oratorio and the St. John Passion by Bach. Once a year there is also a more secular performance.

From May to September, spa concerts with various music artists are held at the Obermühle . In recent years, spa concerts have also taken place in the spa gardens on the stage of the spa house.

Bigger events include the Ashes sweep in Tiefensee, the Easter bonfires (Schnaditz and Tiefensee), the Linden Blossom Festival and the Junker Festival in the Schlosspark in Schnaditz and the Kohlhaas Festival in Wellaune. Every year at the end of May the city ​​festival , which lasts for a weekend, is held. In September there is the North Saxon harvest festival , an Oktoberfest and in December a Christmas market .

During the GDR era, Bad Düben was known as a training center for the NVA and as a production site for machine tools. The NVA site is used today by the Federal Police , the machine tool factory still exists today as a "Profiroll" and trades its products worldwide. After the reunification, more emphasis was placed on the expansion as a spa town and as a location for various small industries. In the 1990s, the "Süd-Ost" industrial park was created.

Bad Düben is located at the intersection of federal highways 2 , 107 , 183 and 183a . The Mulde bridge in Bad Düben is the only one between Pouch and Eilenburg ; Downriver of the Mulde there was a ferry in Rösa , whose operation was stopped. In contrast, the ferry service upstream in Gruna is maintained by means of a passenger ferry for pedestrians and cyclists.

Since 2001, residents of the Wellaune district have been campaigning for a bypass of the B2 federal road . Up to 10,300 cars and trucks drive through the town every day. In 2016, the federal government included the project as a top priority in the federal transport infrastructure plan. According to this, the two-lane new building east of the town should have a daily traffic load of approx. 7,000 vehicles in 2030. The 3-kilometer route will cost the federal government 5.9 million euros; construction will start in 2018 at the earliest.

At Bad Düben station on the Pretzsch – Eilenburg railway line , the seasonal RB 55 line has been running since 2016, which connects Bad Düben with Eilenburg and Wittenberg on some weekends and public holidays . The reception building is unused. It was a backdrop for the Landscape Theater 2018.

The city is in the network area of ​​the Central German Transport Association and is connected by Vetter Verkehrsbetriebe with a PlusBus and other regional bus routes.

Bad Düben is on the Berlin – Leipzig cycle path and the Mulder cycle path .

Since 2016 there has been a jetty for paddle boats about 100 meters upstream. For nature conservation reasons, boat tours on the Mulde are only possible from July 15 to October 31.

As early as 1916 there was a public library in Düben, first as a school, later as a city library. Until the end of World War II, it was housed in the school's gym, then in the town hall . The library was reopened on October 6, 1954 and has moved several times within the city, including in Torgauer Strasse, DSF Strasse (now Altstädter Strasse) and, from 1992, in the "service cube" at Postweg 16. It has been located in Windmühlenweg since November 1, 2011 and uses the 170 m² upper floor of the "Poly" youth center. The size of the city library increased from 1954 with 1,084 books and 4,485 annual loans up to the year 2004 to 17,500 books, sound carriers, videos, games and other media as well as over 30,000 loans annually. Today it is already possible to search for books in the library online from home via the Internet using the Web-OPAC media service , or to borrow electronic books via online loan .

Cities and municipalities in the district of North Saxony