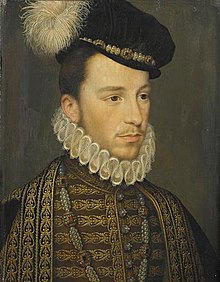 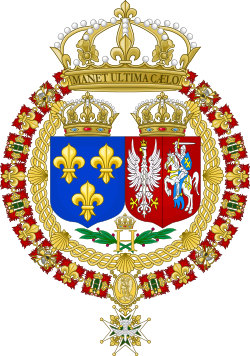 Coat of arms of Henry as King of Poland

Henry III. of France (born September 19, 1551 in Fontainebleau , † August 2, 1589 in Saint-Cloud ), with baptismal name Alexandre-Édouard, Duke of Anjou, also known as Henri of Valois , was elected King of Poland from 1573 to 1574 as Henryk Walezy Lithuania and King of France until his death in 1574 . He was the last ruler of the House of Valois .

Heinrich was the fourth son of Henry II of France and his wife Catherine de Medici . He was his mother's favorite son, and the relationship with the older brothers Franz and Karl was just as difficult as it was with the younger brother Franz Herkules and sister Margarete .

As a boy he showed a slight inclination to the Protestant faith. His taste gave rise to speculation: he was unusually interested in clothes, jewelry, lap dogs, and dolls. He was therefore also called the "Prince of Sodom". Since 1560 - after the death of the eldest brother - he was heir to the throne.

At the age of 17 he became commander in chief of the royal troops in the Third Huguenot War , but the two victories at Jarnac and Moncontour were more due to Marshal Gaspar von Tavannes . After the massacre of the Huguenots on Bartholomew's Night (during which he was present), Heinrich u. a. the unsuccessful siege of La Rochelle (1573) .

In 1570 the French court tried to woo him for the hand of Queen Elizabeth I of England, although she was almost twice as old as Henry and a Protestant on top of that. It is assumed that Elisabeth only wanted to upset Spain with such “talks”. Heinrich is said to have called her a "public whore" for his part. It is possible that his alleged homosexuality also played a role in the failure of the negotiations. At that time, Heinrich had a relationship with the Gascon general Robert Du Guast.

King of Poland, King of France

After the Polish King Sigismund II August died childless in 1572 and with him the male line of the Jagiellonian dynasty had expired, the succession to the throne in Poland had to be reorganized. Since Sigismund's sister Anna Jagiellonica was unmarried, it was decided in Krakow to marry her to a foreign prince and thus to legitimize the new king. Anna was 49 years old at the time, so there was no hope of any descendants from this marriage.

After eight months of diplomatic negotiations with the European courts, five candidates were presented to the Polish public. The entire aristocracy of the country who traveled to Warsaw for this purpose took part in the free election of the new king . Since Henry's role on Bartholomew's Night was not clearly clarified, tolerant Poland raised considerable concerns about his candidacy. This in turn gave the Huguenots in France a respite, because the religious wars were temporarily suspended so as not to jeopardize his election. In order to exclude similar acts of violence and at the same time guarantee valid civil rights, two legal acts ( Articuli Henriciani and Pacta conventa ) were drafted. Heinrich had to sign this before his coronation as king (as Heinrich II. Of Poland) and take a corresponding oath.

However, from the outset, the young ruler showed little interest in state affairs, spending whole days in bed or dancing. He also refused to marry Anna. An increasing aversion grew between him and his subjects.

When his brother Karl died a year later , he left his kingdom in a night-and-mist operation to claim the French throne. In Poland he was subsequently deposed after a period of reflection. Nevertheless, he used the title " King of Poland " until his death . He became a monarch, this time as Heinrich III. of France , crowned on February 13, 1575 in Reims Cathedral. Two days later he married Louise de Lorraine-Vaudémont , who came from a younger line of the Lorraine ducal house and was thus related to the dukes of Guise .

Heinrich was less interested in hunting and tournaments, but - probably thanks to his mother - in art, fashion and literature. Like his grandfather Franz I , he developed into a patron of the arts. He issued decrees that could have alleviated financial and legal problems in his country - if he had pursued their implementation with the necessary force. Apparently, however, he was more interested in the outward appearance of the position of power than in the duties of a head of state. Nor has he been able to escape the influence of his strong mother. In 1578 he founded the Order of the Holy Spirit .

Since he mostly acted indecisively, the French religious wars continued under his rule. At times he approached the Huguenots and made peace with them in order to get rid of the Duke of Guise, Henri I , and then gave in to the insistence of his mother and the Catholics and broke it again.

In the Edict of Beaulieu (May 1576) the Huguenots were given more generous conditions than ever before, with eight security places now. This edict met with so much resistance from the Catholic party that the extremist Henri I von Guise founded the French Holy League , Ligue catholique . Henry III. resumed acts of war, but the Estates General denied him the necessary funds. After many negotiations, in the peace treaty of Bergerac ( Bergerac ) in 1577, he was forced to withdraw most of the concessions made to the Huguenots; at least there were no major acts of war .

The Holy League was - officially - dissolved. The king then expanded the festivities with his favorites, the unpopular Mignons . Catherine of Medici traveled south and secured a precarious peace in endless rounds of negotiations with the leader of the Huguenots, King Henry of Navarre (who was also Henry III's brother-in-law).

Civil war for the succession from 1585

When his younger brother and heir to the throne Franz Herkules died in 1584, Heinrich III. with Henry of Navarre in negotiations and assured him of the succession to the throne, but on the condition that he converted back to the Catholic faith. (According to Salian inheritance law , this, a descendant of King Louis IX , the saint, from the Bourbon branch line, was the next in the line of succession.) The Huguenot leader, however, refused to change faith. This development alarmed the Guisen, the "Holy League" was reactivated. The following conflict was also referred to as the "War of the Three Henris" (King Henry III of France, King Henry of Navarre and Duke Henry I of Guise).

This renewed Holy League, however, had a new character: it was no longer a purely aristocratic party , but a movement with popular support, especially in Paris. She made an alliance with Spain in early 1585, took power in France north of the Loire, but was smart enough not to imprison the idle king. Under pressure from the Duke of Guise and following his mother's advice, Henry III. 1585 an edict hostile to Huguenots, which also excluded Heinrich of Navarre from the line of succession. He also went against the Huguenots with three armies, but in 1587 the victory of the King of Navarre at Coutras gave the war a new turn. The Duke of Guise tried to take advantage of the situation: in January 1588 the League gave the king an ultimatum, which Henry III. should bring you to your knees. However, he replied with unusual firmness and instead of giving in to the demands, including the introduction of the Inquisition , had troops march into Paris.

As a result, a "League of Sixteen" under the leadership of the Duke of Guise triggered a popular uprising in the city ("Day of the Barricades" on May 12, 1588). Although the king was initially locked in the Louvre , he was able to escape to Chartres . In July he signed a settlement with the league, which among other things assured the Cardinal of Bourbon the succession to the throne. In December of the same year, Heinrich III. however , to assassinate the meeting of the Estates-General in Blois , the Duke of Guise and his brother, the Cardinal of Lorraine . To be on the safe side, he had the duke's son arrested.

The duke had been very popular; the citizenship of Paris and other cities therefore rose against the king. The Parlement of Paris, newly established by the League of Sixteen, initiated a judicial investigation, Henry III. had to flee Paris again. His mother died in early 1589; in April he changed sides and renewed the alliance with his brother-in-law, the Protestant Heinrich von Navarre, for which he was banned by the Pope , and now besieged Paris with a Huguenot army.

End of the house of Valois

During this siege, Heinrich III. on August 1, 1589 in the camp at St. Cloud by Jacques Clément , a young Dominican , seriously injured with intent to murder. On his deathbed, the king confirmed his promise of 1584: Henry of Navarre would be his successor (as Henry IV of France). With Heinrich III. After 261 years of rule, the Valois family died out, at least in its legitimate line. Because it was not until 1650 that the Count of Auvergne , an illegitimate son of Charles IX, died.

Even contemporaries worried about the childlessness of Henry III's marriage, in which the whole kingdom participated. Louise may have become sterile as a result of a miscarriage. Other authors attribute the childlessness to the homosexual inclination that diplomats and courtiers said of the husband during his lifetime.

Henry III. was buried in the tomb of the French kings, the cathedral of Saint-Denis . When the royal tombs of Saint-Denis were sacked during the French Revolution , his tomb was opened and looted on October 18, 1793, and his remains were buried in a mass grave outside the church. During the restoration after 1815, all remaining remains were exhumed in the mass grave. Since it was no longer possible to precisely assign them to the individual individuals, they were buried in a common ossuary in the cathedral's crypt.