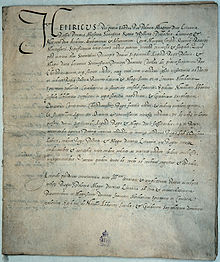 The Pacta conventa (German: agreed conditions ) was a central constitutional document of Poland-Lithuania between 1573 and 1764 or 1791 .

As a supplement to the Articuli Henriciani , they were always newly concluded between the aristocracy representing the Polish nation, the Szlachta , and the newly elected king and contained the approval for the respective government program of the monarch. Over time, the differences between the two documents blurred.

The first version of the agreement, concluded with King Henry of Valois , dealt with: a. with the training of Polish students in Paris, the repayment of the debts of his predecessor Sigismund II August , the preservation of the Polish-French alliance and the continuation of the fighting against Tsar Ivan of Russia .