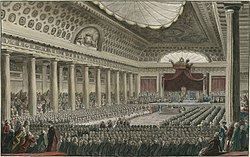 In France, the General Estates (French: États généraux ) is the name given to the assembly of representatives of the three Estates, first convened in 1302 by King Philip IV (see also: Pierre Flote ). These consisted of the clergy , the nobility and the third estate (French: Tiers État). Each of these stands had around 300 delegates.

Advisory function of the Estates General vis-à-vis the monarch

The Estates-General were usually convened by the King in times of crisis , when the task was to enforce new taxes or to get contracts that were risky in terms of foreign policy. The origins of the assembly of estates lie in the ancient duty and the right of the nobility to advise the king. There were repeated attempts by the assembly to influence the royal legislation, but these were not very successful.

In the 14th and 15th centuries, the Estates General had their greatest influence of power, but under Charles VII they increasingly lost their importance. In 1614 they were allegedly on the occasion of the coming of age Louis XIII. , convened for the penultimate time. Behind this, however, was the pressure of noble representatives who saw their political and economic position endangered and wanted to influence royal politics in their favor. The self-image of the rulers of France in the new era of absolutism then no longer permitted the convening of the Estates General.

Only on May 5, 1789, they were by Louis XVI. due to the financial crisis under pressure from the nobility (2nd class) convened again . But in the struggle over the voting modalities, there was a dispute between the nobility, the king and the representatives of the third estate. One of the interim results was to double the number of representatives at the Third Stand to 600. This made up by far the largest part (~ 98%) of the population. According to the tradition, it was planned that the stalls would meet and discuss separately and thus vote according to the stalls, whereby the doubling of the votes of the third stall would not have had any effect. So it was a sham strength. Parts of the nobility and clergy joined the third estate. On June 17, 1789, the third estate, together with the defectors from the first estates, declared themselves to be the National Assembly . The king was forced to accept this innovation and finally agreed to a head-to-head vote. This National Assembly thus decisively accelerated the French Revolution , which had started with an uprising of the nobility.

The stands were called together irregularly. The historiography in France summarizes the following session periods since the Middle Ages:

Confirmation of royal rights and taxes

As a consultative assembly

During the wars of religion

The end of this institution, transition

General Estates in the 20th century