The title of this article is ambiguous. Further meanings are listed under Meaux (disambiguation) .

Meaux [ mo ] ( Latin since the late antiquity Meldis , classical latin Iantinum ) is a French municipality with 54,991 inhabitants (at January 1, 2017) in the department of Seine-et-Marne in the region Ile-de-France . It is the capital (seat of the sub-prefecture ) of the Arrondissement of Meaux . Its inhabitants are called meldois .

Meaux is the most populous city in the department. It is located in the north of the district in a loop of the Marne and on the Canal de l'Ourcq , around 40 kilometers east of Paris , where a large number of residents commute to work. In addition, as a market in the Brie region , the city lives mainly from milk, cheese and cattle production. The Brie de Meaux is a world-famous, protected type of cheese ( AOC since 1980).

The name of the city, which was originally called Iantinum , comes from the Gallic tribe of the Meldi ( Civitas Meldorum ). A dedicatory inscription with the name of the god Atesmerius was found here. It was Christianized in the 3rd century by Dionysius of Paris (Saint Denis), who, after his martyrdom, was followed by Saint Saintin , the first bishop of Meaux. In Merovingian times, Meaux was the capital of the Pagus Meldensis . The city's wealth led to raids by the Vikings in the 9th century, especially in 852 and 886 .

From 888/889 to 1019/1021 Meaux was the capital of the County of Meaux , which was owned by the Count House of Vermandois , a line of the Carolingians . In the 14th century, the city and county fell to the king with Champagne . In 1229, Raimund VII , Count of Poitiers and Toulouse, left all his possessions on the left bank of the Rhône in the Treaty of Meaux , a. a. also the Comtat Venaissin , the Pope. On May 22nd, 1239, 83 Cathars were burned in Meaux, far from their central areas . 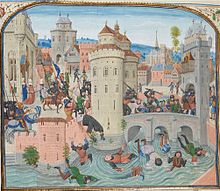 The Hundred Years War (1337-1453) hit the city comparatively hard with a succession of looting, epidemics and famine. This instability led to a revolt of the rural population in 1358 under their leader Guillaume Caillet . They burned down around 60 larger houses and murdered their residents, so that the nobility hid when the rebels appeared in front of the city. The inhabitants opened the gates for them, the mayor himself, Jean Soulas , led them to the hiding places of the nobles. Gaston Phoebus , the Count of Foix , suppressed the revolt at the head of an army of knights. As a punishment, the mayor was hanged and the city of Meaux was exposed to flames for two weeks. In 1421/22 Meaux was besieged by the English for six months . After the city was surrendered, the defenders were hanged or beheaded.

Meaux was one of the most active cities in the 16th century when it came to the spread of Protestantism ( Guillaume Briçonnet , Jacques Lefèvre d'Étaples , called Faber Stapulensis , Guillaume Farel , Jean Leclerc ). In 1546 60 Protestants, including Pierre Leclerc , were burned in public and many more were banished. From 1562, with the toleration of the Protestant religious community in the Edict of Saint-Germain-en-Laye , those who had been persecuted up to now tried to take control of the city, which ended with Bartholomew's Night in 1572. In the Huguenot Wars (1562 to 1598) Meaux was on the side of the League until it submitted to King Henry IV in 1593 .

During the Franco-Prussian War , Meaux was the headquarters of King Wilhelm I of Prussia from September 15 to 19, 1870 .

Municipalities in the Arrondissement of Meaux