Saint-Maur-des-Fossés is a French town in the Val-de-Marne department of the Île-de-France region with 74,859 inhabitants (as of January 1, 2017). The inhabitants are called Saint-Mauriens .

Saint-Maur-des-Fossés is located southeast of Paris on the Marne and is almost completely enclosed by a loop of this river. 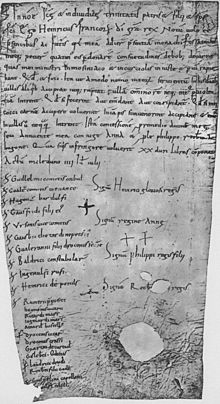 Document from King Henry I dated July 12, 1058 (?) For the Saint-Maur-des-Fossés monastery. Paris, Archives Nationales, No. 101

Saint-Maur was founded around a monastery founded in 639, which was initially called Saint-Pierre du Fossé . In 868 the abbey received relics of Saint Maurus . An alleged miracle in the 12th century and an ensuing pilgrimage prompted the monks to give the monastery the name the city still bears today.

Saint-Maur is connected to the local transport network in the greater Paris area through the following stations on the RER A line :

There are a few smaller businesses in Saint-Maur, especially in the south of the city. The main companies that have settled in Saint-Maur are: RATP (transport), Essilor (optics) and Septodont (dental product innovation).

Saint-Maur is one of the most indebted cities in France. In 2010 the debt amounted to approx. 248.25 million euros. 89% of these consist of structured bonds. The loans taken out result in high interest rates that the city has to pay.

Saint-Maur-des-Fossés is the French twin town of:

The main sports clubs in Saint-Maur are:

There are many other clubs in Saint-Maur, especially in the field of martial arts . There are also numerous offers in the areas of gymnastics , swimming , equestrian sports , etc. In addition, Saint-Maur has a skate park.

Communes in the Arrondissement of Nogent-sur-Marne