Emilia-Romagna is located in the southern part of northern Italy and borders the Po , Veneto and Lombardy in the north, and the Adriatic Sea in the east . In the south it shares in the Apennines and borders on Tuscany , the Marche and the Republic of San Marino , in the west on Piedmont and Liguria .

The eastern part of the area is made up of Romagna , a historical landscape of northern Italy that belonged to the Papal States for a millennium from the 8th century . Its name stems from the time of the rule of the Lombards , who separated the then Eastern Roman area - which belonged to the Byzantine exarchate of Ravenna - from their own area, the Langobardia ( Lombardy ), under the name Romania .

Emilia , to the west of it, was divided after the 15th century into the historic duchies of Parma and Modena , which became the bone of contention between the Habsburgs and the Bourbons . The name Emilia comes from the ancient Roman road Via Aemilia , after which the region was named in the 2nd century.

The capital and largest city of the region in terms of population is Bologna with 390,625 inhabitants, the following cities by population are:

The Arch of Augustus in Rimini is one of the oldest preserved Roman arches of honor and represents an early form of the building type.

Under the administrative division of Augustus , the area of Aemilia (also Gallia cispadana , i.e. the part of Gallia cisalpina on this side of the Po ) was the eighth region of Italy. The name is derived from the Via Aemilia , the Roman road that crosses the area between Ariminium ( Rimini ) and Placentia ( Piacenza ) to the northwest. It was already in common use during Martial's time .

The Ravenna area was generally not considered to be part of the Aemilia, the main city of which was Placentia. In the 4th century Aemilia and Liguria were combined into one province. Then the Aemilia stood for itself, with Ravenna being added several times at times.

Pippin donation and formation of communes

During the Byzantine period, Ravenna became the seat of the Exarchate of Ravenna . The Lombards referred to this area as Romania to distinguish it from the area they controlled, the Langobardia . After the Lombards tried for two centuries to subjugate the territory of Ravenna, Bologna , Forlì , Faenza , Rimini , Pippin took these cities from Aistulf and gave them to the papacy together with the Ancona march in 755. From then on, under the name Romagna , the area belonged at least nominally to the Papal States . At first, however, the Archbishop of Ravenna was predominant, and Romagna continued to be disputed between the Pope and the Emperor.

The other important cities of Emilia - Ferrara , Modena , Reggio , Parma , Piacenza  - were independent. At the time of the independence of the Italian city-states, each of the great cities of Emilia, Romagna or not, had its own history. Despite the feuds between the Guelfs and Ghibellines , they flourished. The emperor's influence formed a counterbalance to papal power.

Nicholas III got the Romagna under control in 1278 by means of a concordat with Rudolf von Habsburg , but the Papal State almost disintegrated during the Avignon Popes and was only sustained through the efforts of Cardinal Albornoz , a Spaniard who was killed by Innocent VI. was sent to Italy. Nevertheless, the papal supremacy can hardly be called more than nominal.

This status only ended when Cesare Borgia , the natural son of Alexander VI. , eliminated most of the princes of Romagna in order to establish their own dynasty. When Alexander died, it was his successors in the papal office who continued Borgia's policy and benefited from his work. From then on the cities were subordinate to the papacy and were administered by legates.

In what is now Emilia-Romagna, ten so-called ghettos were set up for the Jewish population in Correggio , Guastalla , Reggio Emilia, Carpi , Modena, Bologna, Cento , Ferrara, Lugo and Rimini with the aim of segregation .

Development of the various duchies of Emilia

Ferrara and Comacchio stayed with the House of Este until they were claimed as vacant fiefs by Pope Clement VIII after the death of Alfonso II in 1597 . Modena and Reggio , which had been part of the Duchy of Ferrara, now formed their own duchy under a side branch of the House of Este, which arose from the illegitimate son of Alfonso I, Cesare .

Carpi and Mirandola were small principalities. Carpi passed to the Este family in 1525 when Charles V drove out the Pio family. Mirandola was ruled by the Pico family until Francesco Maria from this house sided with the French in the War of the Spanish Succession . The duchy was therefore taken from him by Emperor Joseph in 1709 , which was sold to the House of Este in 1710.

Parma and Piacenza were initially under the rule of the Farnese after Pope Paul III. his natural son Pier Luigi had installed there in 1545 . After the family died out in 1731, a secondary branch of the Spanish Bourbons ruled there .

From 1796 to 1814 Emilia-Romagna was first incorporated into the Cispadan Republic , then into the Cisalpine Republic in 1799 and was part of the Napoleonic Kingdom of Italy . After 1814, the Restoration resulted in a return to the previous distribution of power. Romagna fell to the Papal States and its ecclesiastical government. The Duchy of Parma went to Marie Louise , wife of the deposed Napoleon, and Modena to the Archduke Franz of Austria , heir to the last Estonian.

In Romagna and Modena the government was repressive, arbitrary, corrupt and backward, while in Parma things were better. In 1821 there was an unsuccessful attempt at revolt in Emilia, which was severely and brutally suppressed. The chronic dissatisfaction continued and the revolution of 1848–1849 was again suppressed by Austrian troops. In 1859 the struggle for independence was finally successful, and Emilia became part of the Kingdom of Italy in 1861 with almost no resistance .

At the beginning of the 20th century industrialization began in the cities of the region and the labor movement emerged . During Fascism , especially between 1943 and 1945, the Emilia-Romagna, which is also home region of Mussolini , was a center of resistance ( Resistenza ). After 1945 it was one of the reliable strongholds of the Italian Communist Party ; the tensions at that time between traditional authorities such as the church and the communists were u. a. immortalized in the stories about Don Camillo and Peppone . With the decline of the Communist Party and the structural change in the economy in the 1980s and 1990s, the regional political landscape changed, with the social democratic Partito Democratico dominating today .

The Emilia-Romagna region includes the following eight provinces and one metropolitan city:

Provinces and Metropolitan City of Emilia-Romagna

Important regional dialects are Emilian and Romagnol , which are often combined into one dialect . These are assigned to the northern Italian dialects, as they lie north of the La Spezia - Rimini line. However, the written and official language is Italian .

The region is the third wealthiest in Italy after Lombardy and the Aosta Valley . In 2015, the regional gross domestic product per inhabitant, expressed in purchasing power standards , was 119% of the EU-28 average . In 2017, the unemployment rate was 6.7%, below the national average. 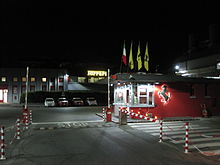 The Comet SpA in Reggio Emilia is one of the largest pump manufacturers. In addition, high-pressure cleaners and industrial vacuum cleaners are manufactured. Sassuolo , south of Modena , is one of the world's largest tile production centers with over 40 companies that export all over the world.

Local groceries in a shop in Ravenna

The real balsamic vinegar is produced in the Modena area according to a centuries-old tradition. The provinces of Reggio Emilia and Parma are home to the trademarked Parmigiano Reggiano , the real Parmesan . Parma ham is produced in the hills around Parma . Parma is also the headquarters of the Barilla food company , one of the largest pasta manufacturers in the world.

Tourism can be found throughout the region: thermal tourism in Salsomaggiore Terme in the west and Riolo Terme in the southeast of the region, city and cultural tourism especially in Parma , Modena , Bologna , Ravenna and Ferrara , nature tourism in the Po Delta and the nature reserves in the Apennines , Beach tourism on the Adriatic coast ( Rimini , Cervia with Milano Marittima and Cesenatico ).

There are several well-known racetracks in Emilia-Romagna. In Imola, for example, there is the Autodromo Enzo e Dino Ferrari , where not only motorcycle grand prix but also Formula 1 races take place. In Misano Adriatico is located Misano World Circuit Marco Simoncelli , on a regular motorcycle and World Championship Superbike -Läufe are held. In the small town of Fiorano Modenese in the immediate vicinity of the headquarters in Maranello near Modena, Ferrari operates the private race track Pista di Fiorano .

The region is also home to some well-known Italian football clubs , such as FC Bologna and FC Parma .

Don Camillo in front of a church in Brescello

Provinces in the Emilia-Romagna region