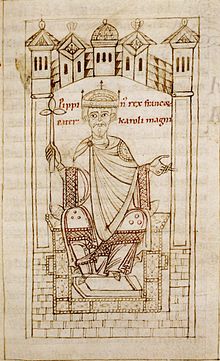 Medieval depiction of Pippin (around 1114)

Signature of Pippins at 750 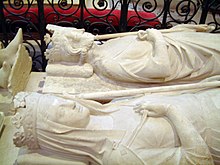 Pippin the Younger , also called Pippin III. , Pepin the Short and Pippin the little French: Pépin Le Bref (* 714 , †  24 September 768 in Saint-Denis in Paris ) was a Frankish house Meier from the sex of the Carolingian and since 751 King of the Franks . He was a son of Karl Martell and the father of Charlemagne .

Pippin was born in 714 as the second son of Karl Martell and his first wife Chrotrud and raised in the monastery of Saint-Denis .

In March 741, Karl Martell divided the empire between the sons from his first marriage, Karlmann and Pippin, whereby the few, later sources contradict each other about the type and implementation . Karlmann got Austria , Alemannia and Thuringia , while Pippin got Neustria , Burgundy and Provence . Shortly before his death, Karl Martell changed his will. Grifo , his son from Swanahild , now also got his share. After Karl Martell's death, Karlmann seized his half-brother Grifo and his mother and imprisoned them in different monasteries. In 742, after the Aquitaine campaign, according to the Annales regni Francorum , Karlmann and Pippin finally divided the empire among themselves. Since power did not seem consolidated, Karlmann continued with Childerich III in 743 . again a Merovingian king in order to give his office as caretaker a royal legitimation.

In principle, there seems to have been no agreement and no successful cooperation between the two brothers. When Karlmann surrendered his lands to Pippin in 747, according to the Carolingian-friendly sources, and retired to the monasteries of Monte Soracte and Monte Cassino , there seems to have been at least rumors that this withdrawal was not entirely voluntary. Pippin explicitly stated in contemporary sources that it was his brother's decision alone. However, he then took over the reign of the entire Franconian Empire , bypassing possible inheritance rights from Karlmann's children and from his half-brother Grifo , which, however, did not remain unchallenged. So he had to suppress Grifo's indignation again. With the Alemanni , Pippin revoked the ducal dignity, and in Bavaria he set Odilo's underage son Tassilo III. as a duke, but under Franconian sovereignty.

Statue of Pippins on the Old Main Bridge in Würzburg

Pippin endeavored to achieve the title of king after the office of house maid . The actual power had long been with the Carolingian house fights. The Merovingian kings were rulers only in name. To legitimize this title acquisition, Pepin the Frankish served by representation realm annals of Pope Zacharias . Pippin sent his most important advisors, Fulrad of Saint-Denis and Bishop Burkard of Würzburg, to the Pope in Rome with the question: "Because of the kings in Francia who have no power as kings, whether that is good or not." the Pope: "It is better to call the king who has power". In November 751, Pippin had himself proclaimed king (Rex Francorum) by a gathering of the Franks in Soissons after Childerich III was deposed, who was relegated to the Prüm monastery together with his son Theodoric , and thus ended the series of kings from the Merovingian family .

Territorial situation of Europe in 737 AD

With the election of Pippin as king, the Carolingian rule began in the Franconian Empire. The exact role of the Pope in this process was later seen differently: While Rome assumed a kind of authoritative request for coronation and thus a papal right of disposal over the kingship, the secular greats understood the “wisdom” of the Pope more as a kind of expert opinion. When Pope Stephen II, besieged by the Lombards , came to the Frankish Empire to ask Pippin for help (February 6, 754 in Ponthion ), he and his sons Karlmann and Karl settled in the Saint-Denis basilica on July 28, 754 anoint from him .

In the spring of 755 Pippin moved to Italy. The Lombard king Aistulf , besieged in Pavia , showed himself to be accommodating, but after Pippin's departure broke his promises and besieged the Pope in Rome . Pippin returned in 756, forced Aistulf to recognize the Frankish sovereignty and to cede the exarchate of Ravenna , which Pippin gave to the Pope ( Pippin donation ), and took over the patriciate over the city of Rome.

In 753 and 757 he successfully waged wars against the Saxons and drove the Saracens across the Pyrenees by conquering Narbonne . From 760 to 768 he undertook repeated campaigns against Duke Waifar of Aquitaine . In addition, he could Duke Tassilo III. force von Bayern 757 to take the vassal's oath.

Pippin died on September 24, 768 in Saint-Denis near Paris and was buried in the west in front of the monastery church there, today's cathedral of Saint-Denis . When the royal tombs of Saint-Denis were sacked during the French Revolution, his tomb was opened and looted in August 1793, and his remains were buried in a mass grave outside the church.

In addition to Karl and Karlmann, he had four other children from his wife Bertrada the Younger :

A memorial plaque for him was placed in the Walhalla near Regensburg .

The role of Boniface in Pippin's anointing of the king of 751 is controversial in science. The fact that Boniface anointed Pippin at that time is only reported in sources that arose one or two generations after the event ( Reichsannalen , Metzer Annalen ), but this is not mentioned in contemporary sources such as the Fredegar continuation and the Boniface letters. In historical studies, the anointing of the bonifatiuss is sometimes viewed with skepticism, but sometimes also considered possible.

It is also unclear whether the example of the Visigoths could have played a role, who had maintained close contacts with the Franks until the fall of their empire and whose rulers had been anointed since Wamba at the latest . Another thesis relates to the fact that Pippin had his wife anointed not only himself. The ritual initially resembles that of the anointing of Saul by the prophet Samuel in the Old Testament . But through the involvement of his wife, the possible descendants are included in the ritual. The involvement of the Pope and the bishops should ensure appropriate attention, since there was a dispute within the family about the succession and an indisputable solution should be presented here.

In 2003, Josef Semmler posed the thesis, which completely questioned the current state of research, that there was no anointing at all in 751, while the anointing in 754 by Pope Stephen II was not a king's anointing, but only a so-called "post-baptism anointing", which was has been controversial since then.

If Semmler's thesis were correct, however, with regard to the symbolic-ritual aspect, even a fictitious anointing would be of importance. Because it was recorded as a legitimizing factor in the Carolingian sources and thus became an effective part of symbolic-political communication.

Pippin's nickname “the short one” or “the little one” does not come from the wrong translation of the Latin “Pippinus minor” for “Pippin the younger”, as is sometimes claimed. Rather, "Pippin the Short" (Latin: Pippinus brevis ) was an epithet that was originally attributed to Pippin the Middle in sources of the 11th and 12th centuries (as in Ademar von Chabannes and in the 13th century in the Grandes Chroniques de France ). The epithet was transferred to Pippin the Younger from the 12th century under the influence of an anecdote already written down by Notker Balbulus in 883/884 ( Gesta Karoli Magni , book 2, chap. 15). Then Pippin the Younger defeated a lion with the sword and compared himself with the little David as he stood opposite the great Goliath , as well as with the short stature Alexander the Great . Gottfried von Viterbo even calls Pippin the Younger in his “King's Mirror” ( Speculum regum , 1183) Pippinus nanus , ie “Pippin the Dwarf”. Some later authors followed him in this, such as Sicardus of Cremona in his universal chronicle ( Chronica universalis , 1213).

To assign the epithet "the Quick" Pepin the Short played well as a role that one of his son Charles, the size of the Great with a little wanted to contrast predecessor. Another explanatory approach is based on the fact that the nickname “the short one” was also suggested by the name Pippin, since “Pippin” can be interpreted as “little one” (originally a nickname for a small child). In today's German history, the nickname "the short one" is not in use; Generally speaking, Pippin the Younger is spoken of, which goes back to his position as the third and youngest house manager of this name. In English ( Pepin the Short ) and French ( Pépin le Bref ), however, the term is still more common today, compare the book title by I. Gobry (2001).