The title of this article is ambiguous. For other meanings of leek, see Leek (disambiguation) .

It is a biennial herbaceous plant that reaches heights of 60 to 80 cm. In contrast to the wild form, leeks do not have an onion . The linear to lanceolate leaves are 1 to 5 cm wide.

The inflorescence stands on a smooth inflorescence stem and has a many-leaved, long-beaked envelope, which is longer than the large, spherical, multi-flowered, golden inflorescence . The hermaphroditic flowers are radial symmetry . The white to light purple bracts are 4.5 to 5 mm long and 2 to 2.3 mm wide. Egg-round capsule fruits are formed. Sometimes brood tubers are formed in the inflorescence.

Leek is grown mainly in the Mediterranean region and in Europe, with the focus in Germany on North Rhine-Westphalia . Cultivation of varieties for harvest in autumn or winter is carried out by sowing in an outdoor seedbed from March to April and usually transplanting to the final location between late May / early June to late July. In order to harvest leeks between June and August / September, sowing takes place in a cold greenhouse from the beginning of January to the beginning of March; the young plants obtained in this way are planted outdoors between the end of March and the end of May. When transplanting, depending on the desired stand density, the leek plants are set at row spacings of 30 to 50 cm and plant spacings between 10 and 15 cm. The stand density per hectare varies between 200,000 plants for early varieties and 100,000 plants for winter varieties. The yield for winter varieties is around 25 t per hectare. Due to the high frost resistance of most types of leek for winter cultivation, they can often remain in the field over the winter.

The most important and, above all, quality-reducing pests are onion thrips ( Thrips tabaci ), which turn the leaves silver-gray through sucking, and the leek moth ( Acrolepiopsis assectella ), which eats holes in the leaf and leek. Onion leaf miner and onion fly are rarer pests. The fungal diseases are leek rust ( Puccinia allii ) defined by rusty "pustules" paper blight ( Phytophthora porri ) by paper-like discoloration of the leaves and growth loss and purple blotch ( Alternaria porri ) by its leaf spots reduce the quality or make leek sale. The rust fungus overwinters on infested plant remains or on leek stalks that remain in the bed over winter, or on nearby plants such as chives . Infested plant debris should not be placed on the compost . More rarely occurs even the fungus Samtfleckenkrankheit ( Cladosporium allii ), the viral disease Gelbstreifigkeit ( Leek yellow stripe virus = LYSV, shallot latent virus = SLV, or garlic latent virus = GLV) on leeks, which can be caused by several viruses. It is important to have a wide crop rotation that prevents the build-up of an increased harmful population in a field or in a region. This can be counteracted in the home garden with mixed cultures. Neighboring plants play a certain role in this. An important factor in this is allelopathy . Reduce favorable neighbors such as endive , strawberry , chamomile , cabbage , kohlrabi , lettuce , carrot , salsify , celery and tomato , poor neighbor plants such as beans , peas or beetroot can promote growth and disease pressure. 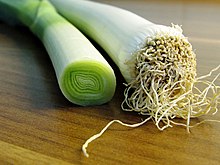 Leek is used both as a vegetable (mostly winter leek) and as a kitchen spice (mostly summer leek); it can be eaten cold or warm as a vegetable or salad . Together with carrots and celery , leek is used as a spice in soups, known as soup greens . It is also used in the North Hessian specialty bacon cake or as a hot and cold leek cake .

Leek contains, among other things, vitamin C , vitamin K and folic acid as well as the minerals potassium , calcium , magnesium and the trace elements iron and manganese . The sulfur compound propanthial- S -oxide , which is formed from isoalliin and the catalyzing enzyme alliinase, causes the intense smell and taste of leeks. The sulfoxide cycloalline is also found in various types of leek.

Until the 1970s, the term "leek" was often used in German-speaking countries for leek (from Middle High German louch ), only in German-speaking Switzerland, in Baden-Württemberg, Saarland, Rhineland-Palatinate, in southern Hesse and scattered in Austria and the In western Bavaria the term “leek” was even more common.

Leek was so sacred in the old Germanic ritual that it gave its name to a rune . In the British Isles it is said to have been used by the British King Cadwallader around 640 as a symbol of identification for his troops. Leek is one of the national symbols of Wales , corresponding to the English rose and the Scottish thistle.

A volume with stories from Arno Schmidt from 1959 is entitled Roses and Leek .

The leek is a cultivar of the Ackerl Auchs ( Allium ampeloprasum ), which occurs in the Mediterranean wild and cultivated in various forms. Leek was already around 2100 BC. Chr. Known. The Sumerian ruler Urnammu had it grown in the gardens of the city of Ur . Leek was also used in ancient Egypt . According to Herodotus , it is said to have served as food for the workers who built the pyramids. Afterwards, leek was valued throughout the Mediterranean region in ancient times . The leek probably came to Central Europe from Italy in the Middle Ages .