Chives ( Allium schoenoprasum ), also called grass leek, rushes, brislauch, Grusenich, scallop or chives, is a species of the genus leek ( Allium ). The chives are circumpolar distributed from the middle latitudes to the boreal and subarctic zones, with accumulation in alpine altitudes of the high mountains of the northern hemisphere . Despite the wide distribution and numerous occurring ecotypes, the species cannot be split into subspecies according to genetic characteristics. Chives are used as a spice and are a common crop. 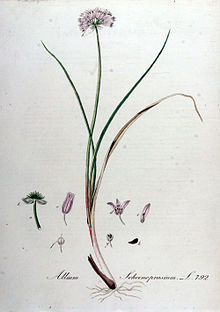 Chives are perennial herbaceous plants that reach heights of 5 to 50 centimeters. It forms a thin-skinned, egg-shaped to cylindrical onion with a diameter of 0.5 to 1 centimeter. One or two green or gray-green, tubular leaves with a diameter of 2 to 6 millimeters sprout from it. As a result of underground vegetative propagation by daughter onions, chives often appear in the form of many-leaved clumps .

The flowering period extends from May to August, depending on the location. The inflorescence stems are similar to the foliage leaves, but are a little firmer and taller. The terminal, dense, spherical to egg-shaped, shingled inflorescences contain many (30 to 50) flowers. Their bracts never rise above the inflorescence. In contrast to vineyard leeks ( Allium vineale ) or vegetable leeks ( Allium oleraceum ), the inflorescence of the chives does not develop any brood bulbs . The short flower stalks are one and a half to three times as long as the flowers.

The hermaphroditic , bell-shaped flowers are about 5 millimeters in diameter, radial symmetry and threefold. The six identical, gradually tapering bracts are about 0.7 to 1.1 (rarely up to 1.7) centimeters long and 3 to 4 millimeters wide. The color of the bracts is violet-purple, rarely white, sometimes with a bluish tint, it varies from light to dark red; a dark, prominent median nerve is noticeable. There are two circles with three toothless stamens each. The stamens are usually a third to a half (rarely up to two thirds) times as long as the bracts; they are fused at their base and over a length of 1–1.5 millimeters with the bracts. The inner stamens are only half as wide as the outer ones. The anthers are purple in color. Three fruit leaves are a top constant, almost spherical ovary grown. The stylus ends in a cephalic scar. The almost spherical capsule fruit is surrounded by the bloom like a balloon. The seeds are black.

Chives are good for bee foraging

The chives are a boreo-montane species that is common in the cold temperate zone . Mostly it is regarded as an element of the subalpine vegetation level with North American - Eurasian distribution. According to Hermann Meusel , Eckehart Jäger and Erich Weinert ( Comparative Chorology of Central European Flora ), chives are probably a floral element of the continental arctic - alpine flora with connections to the steppe flora. In Great Britain the chives are counted among the boreal-arctic montane flora elements. It often grows here in damp locations on lake shores and river banks, where it provided a constant floral element even during the ice age cold phases . In Scandinavia it occurs as a component of sub-boreal and boreal steppes on flat rock and limestone soils . It belongs here to the plant-sociological order Helianthemo-Globularion in the class Festucetalia valesiacae .

In the Central European highlands, chives can be found on soaked, swell-wet slopes and sprinkled rock terraces in high-montane and subalpine wet pastures. Although it is only sporadically widespread in such wet meadows, it then occurs over boggy soils with a degree of coverage of around 75 percent. In addition, numerous wet indicators such as marsh horsetail , brook avens and acid indicators such as the brown and stiff sedge grow . Strong-nerved mosses of the alpine spring meadows are common in the moss layer . In the arctic regions of the Taimyr Peninsula , the species Lagoto glaucae-Allietum schoenoprasi has been described from the wet meadows of the tundra. These were placed in the class Thlaspietea rotundifolii .

Natural stocks of chives are widespread in the northern hemisphere in high alpine mountains of temperate, boreal and subarctic Eurasia and North America , both in kitchen gardens and overgrown.

The European distribution center is in Fennoscandinavia , northern Russia and the subalpine altitudes of the Spanish peninsula , the Alps (especially in the western limestone Alps ).

Smaller occurrences can be found in the Sudetes , on the Balkan Peninsula (e.g. a population newly discovered in 2012 near Idrija in the northern part of the Dinaric Mountains ), also in Slovakia , Romania , Serbia (Prokletije, Šar Planina, Pešter, Stara Planina and Tara Mountains), Montenegro (Maganik, Durmitor and Prokletije) and North Macedonia (Šar Planina, Belasica, Galičica and Nidže).

In Greece , chives are rare and are only described from three locations from the northern Pindos and the Voras . In the Tymfi Mountains on the Greek-Albanian border, on the Smolikas and on the Kajmakčalan on the Greek-Macedonian border, it is limited to moist alpine grass areas between 1700 and 2100 m.

In Eurasia, chives are found in the Urals , the Ararat highlands , the Caucasus , Central Asia (in the Himalayas up to 4760 m altitude), Siberia and the Far East .

On the American continent, it occurs in the boreal regions of the United States and Canada .

The more robust growing “subspecies” ssp. sibiricum thrives at altitudes between 1200 and 2650 m on moist rock debris , floodplains and snow soils as well as in brook grooves and at spring outlets. In the Allgäu Alps, it rises up to 2100 meters above sea level. The habitats are very or moderately supplied with nutrients.

The small, remaining "subspecies" ssp. schoenoprasum grows along rivers and on fine, muddy sand and gravel banks on the seashore.

The chives are placed in the genus Leek ( Allium L.) in the section Schoenoprasum Dumort. Like the other closely related sections, Cepa Prokh. and Annuloprason Egor. also with spear-shaped leaves, it belongs to the subgenus Rhizirideum (Koch) Wendelbo. In the last valid taxonomic review of the Schoenoprasum section by Nikolai Friesen (1996), seven species and three subspecies were recognized in the section. The most important type of section is the diploid chives, which are widespread in Eurasia and North America. The chives also include two tetraploid subspecies that have been described from Spain: ssp. latiorifolium. (Sierra de Guadarrama) and spp. orosiae. (Hueska).

Chives are morphologically diverse and therefore have a complicated nomenclature past. Four morphological types were informally eliminated by Frisians over the entire range, as was Allium buhseanum usually from the Elburs in Iran and the Caucasus as a synonym for A. schoenoprasum s. l. applies. In general, the problems stem from the incoherent distribution of the four types and the characters on which this distinction is based.

The smallest plants can be found on limestone , which have been independently described as different variations, but prove to be very similar morphologically: var.pumilum Bunge (Altai, Siberia), var.alvarense Hylander (island of Öland in Sweden), var.urmoense Eklung (Finland, archipelago in the Gulf of Finland) and forma kokinjae Hay. (Balkan Peninsula). The more robust variants are mainly found in the mountains of the entire area and are mostly called Allium sibiricum L. , A. schoenoprasum ssp. sibiricum (L.) Richter or A. schoenoprasum var. alpinum DC. designated. Another type has longitudinally ribbed leaves, which occurs sporadically in Siberia and possibly in other regions. However, the characteristic disappears in herbarized plants. This form is sometimes observed in larger groups that all have the same characteristic, but it usually occurs together with typically shaped A. schoenoprasum . One of these populations was then named as an independent species, A. udinicum Antzupova.

Molecular genetic studies indicate that the Schoenoprasum section is of widespread origin in Eurasia and North America and that A. schoenoprasum has genetically formed three geographical groups: a European, an Asian-Siberian and an Iranian-Caucasian. The East Asian populations have probably spread via Beringia to the North American continent. The Scandinavian populations were probably only formed after the post-glacial migration from southern European locations. The tetraploid Spanish subspecies latiorifolium presumably originates from a genetic modification with a species from the section Cepa .

The specific epithet schoenoprasum is made up of the Greek words schoinos for rush and prason for leek, directly translated as "rush leek", and relates to the shape of the leaves.

Chop up chives with herb scissors

Chives have been in culture since the early Middle Ages . There are numerous varieties that vary greatly in terms of height and leaf thickness. In addition to the typical purple blooming forms, white blooming forms also occur. Occasionally, chives are also used as an ornamental plant in gardens, for example in rock gardens, and for roof greening.

Chives are used fresh or frozen, dried or freeze-dried less often due to their low aroma and are part of the fines herbes of French cuisine . Only the tube leaves above ground are harvested as a kitchen spice. Finely cut, it is added to salads, soups, egg dishes or mayonnaise. Chives bread - a sandwich with plenty of toppings with chives rolls - is a popular component of the snack platter in Bavaria and Austria. Chives are part of the green sauce , based on both the Frankfurt and Kassel recipes, a typical dish of German regional cuisine that is particularly popular in the Hessian region.

Commercially, chives are usually grown as a seasoning herb in greenhouses, rarely also in field cultivation. In the 1990s, the main varieties in commercial cultivation were 'Dominant', 'Kirdo', 'Fitlau', 'Wilan' and 'Polyvert'. In 2004 the cultivation area of ​​the farms producing chives in Germany was 642 hectares , in 2011 580 hectares in seven federal states. In the category of medicinal, aromatic and aromatic plants, five percent of the crops statistically recorded in this category were chives. In 2003, chives were the most important after parsley, chamomile and linseed. With around 220.1 hectares in 2003, Lower Saxony was the frontrunner among the federal states with chives production (out of a total of 625.5 hectares cultivated in the survey period).

Since 2010, chives have no longer been recorded in the EU regulation on the statistics of plant production under vegetable cultivation and the survey of vegetables, but only in the main land use survey under medicinal, aromatic and aromatic plants.

The long leaves are cut deeply and keep drifting all year round; in the case of commercial cultivation, harvesting takes place once in the first year and three to five times later. 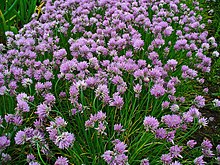 In plant protection of crops from chive plants there are some problem areas. As causes of disease and pests include known: fungi such as Puccinia allii (leek rust), downy mildew ( Peronospora destructor ), insects such as aphids of the species Myzus ascalonicus and Neotoxoptera formosana , leek moth ( Acrolepiopsis assectella ) Lauchminierfliege ( Phytomyza gymnostoma ) Zwiebelthripse ( Thrips tabaci ), as well as nudibranchs and annoying weeds .

The taste arises from the by-products of the enzymatic breakdown of cysteine sulfoxides such as dipropyl disulfide , methylpentyl disulfide , pentyl hydrodisulfide and cis / trans-3,5-diethyl-1,2,4-trithiolane .