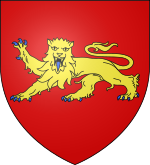 The Duchy of Aquitaine was one of the most important feudal territories in medieval France . 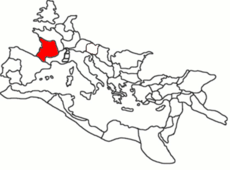 The province of Gallia Aquitania in the Roman Empire

The historical basis of this country was the ancient Roman province of Gallia Aquitania , which at that time comprised all of central and south-west France. In late antiquity the province was divided into Aquitania prima , Aquitania secunda and Aquitania tertia , which belonged to the Visigoth Empire after the Great Migration . After their defeat in the Battle of Vouillé in 507, Aquitaine was admitted to the empire of the Franks .

During the 6th to 8th centuries, the territory of the Aquitaine Ducat still corresponded to that of the old Roman province, i.e. all land south of the Loire to the Pyrenees with the exception of the province of Gallia Narbonensis . At the end of the 8th century, the area of Aquitania tertia around Bordeaux was lost to the incoming Basques (Vascones), who then founded the Duchy of Gascogne .

In the 13th century, the high medieval Aquitaine fell apart. The owner of the ducal legal title was left with only the Saintonge and the Périgord, two landscapes of Aquitaine to which the duchy was now limited. Together with Gascony to the south, the name " Guyenne " became established for this structure in the late Middle Ages . The area of ​​the Guyenne corresponded to that of today's French region Aquitaine .

Dukes of Aquitaine under Frankish rulers 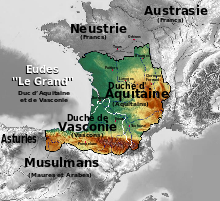 The duchies of Aquitaine and Gascony in the 8th century

The rule of the Frankish kings from the Merovingian dynasty was only weak in Aquitaine, as the center of their empire was in Neustria and Austrasia north of the Loire . Instead, dukes appointed by the kings ruled ( dux ). Since the early 8th century, Aquitaine was exposed to the influx of the Basques, who established their own territory in the southwest with Gascon . At the same time, the dukes had to defend the country against the raids of the Moors , who penetrated the Pyrenees and occupied the neighboring Narbonensis ( Septimania ).

Due to the weakness of the late Merovingian kings during the defensive battles, the Duke Eudo's family managed to establish themselves as hereditary princes in Aquitaine.

Aquitaine in the 8th century

The Carolingian sub-kingdom of Aquitaine 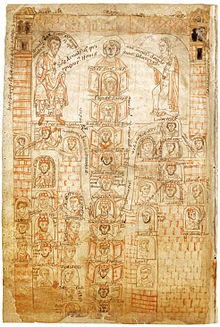 Family tree of the Carolingians

After the Carolingians were able to subjugate Aquitaine to their rule through Pippin the Short and especially through Charlemagne at the end of the 8th century, they established a sub-kingdom of their dynasty there. Mostly underage or younger sons of the dynasty were appointed as kings, over them the king of the entire empire or, since the division of Verdun in 843, the king of the West Frankish empire ruled . King Pippin II tried to establish Aquitaine as a partial empire, on an equal footing with the western, central and eastern empires, but was defeated by his uncle Charles the Bald . During this time Aquitaine was particularly marked by the raids of the Normans .

The Duchy of Aquitaine 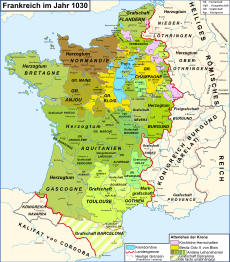 Aquitaine in the 11th century

Under the last Carolingian kings of the West Frankish empire , the royal central power disintegrated, additionally reinforced by their power struggle with the Robertinians / Capetians , and independent dynasties, hereditary counts, established themselves in the provinces, who only nominally recognized the kings as overlords. In Regnum in Aquitaine it was above all the Wilhelmids (also called Gellones) with their center in the Auvergne and the Ramnulfiden in Poitou, the latter of which at times bore the title of "dux". The Wilhelmids took on the leading position of the country, so that Wilhelm the Pious 909 was able to accept the title of "Duke of Aquitaine" ("dux Aquitanorum"), which was also given by King Charles III in 919 . recognized by the simple-minded . In 927, the Ramnulfides were finally able to inherit the Wilhelmids. The duchy included the Poitou , the Saintonge , the Angoumois , the Périgord , the Marche , the Lower Berry , the Auvergne and the Limousin . The county of Toulouse , which originally belonged to Aquitaine , had separated at the beginning of the 10th century and from then on formed an independent principality. In contrast to Normandy, the ducal power in Aquitaine was not well established because the duchy was heavily feudalized. That is, the duke was subject to large vassals who owned land, who used every opportunity to curtail the ducal power. In 1052, Gascony could be united in personal union with Aquitaine.

In the middle of the 12th century, through the marriage of Duchess Eleonore and Heinrich Plantagenet , the duchy was incorporated into the territorial conglomerate of the Plantagenet dynasty, known today as the " Angevin Empire ". Due to their abundance of power, the Plantagenets came into conflict with the kings of France, who were the overlords of their property in France.

The Duchy of Guyenne

As early as 1204, during the Franco-English War from 1202 onwards , King Philip II of France had declared the Plantagenets forfeited all their properties in France by a parliamentary decision. In 1224 his son King Louis VIII of France led a campaign to Aquitaine , whereupon the rule of the Plantagenets ended there. The Poitou and the Saintonge became immediate crown lands, the Counts of La Marche, Périgord, Angoulême and Auvergne became direct crown vassals. This destroyed the territorial integrity of Aquitaine. King Henry III of England recognized this loss in the Treaty of Paris in 1259 . In return, he received the Saintonge, an Aquitaine province back, to which the duchy has since been limited. The country remained a fiefdom of France, for which the Plantagenets were accepted into the ranks of its pairs . However, he did not renounce the title of Duke of Aquitaine. The remaining areas of Aquitaine were also referred to as Guyenne with Gascony to the south , with Aquitaine, Guyenne and Gascogne being synonymous in the 13th century. In the next few years England and France enjoyed good relations with each other, and in 1279 the English King Edward I received the Agenais back in the Treaty of Amiens , while he finally renounced the Quercy in exchange for compensation . The good relationship was ended by the Franco-English War from 1294 to 1298 , in which the French were able to conquer almost all of the remaining English possessions. English counter-attacks led to an armistice in late 1297, and in 1303 the French had to renounce almost all conquests in the Treaty of Paris . Relations between England and France remained tense, and in the War of Saint-Sardos from 1323 to 1325 the French were able to win the Agenais.

Due to the campaigns of the "black prince" during the Hundred Years' War , the Plantagenets were able to unite most of the old Aquitaine again in the Treaty of Brétigny in 1360 . The French crown even renounced sovereignty over the Guyenne in favor of England. The country thus became English territory under constitutional law. The subsequent campaigns of the French Marshal Bertrand du Guesclin , however, led to a revision of the treaty until 1375. At the end of the Hundred Years War, after the Battle of Castillon in 1453, the Plantagenets had to give up their possessions in France entirely. The land was united with the crown domain and set up for administration in several Sénéchaussées . At the beginning of the modern era, they were replaced by généralités , to which governorates were superordinate. These in turn were replaced by the départements in 1789 .

Further use of the title of duke

Until the end of the French monarchy, the Aquitaine duke title was still awarded to two royal princes:

In 1972 the Bourbon pretender to the throne of Spain, Jaime de Borbón , conferred the title Duke of Aquitaine on his second son, Gonzalo de Borbón († 2000) .