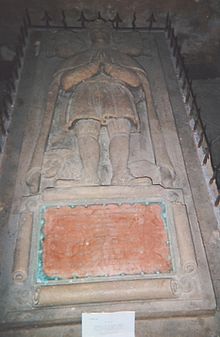 In Gascon he followed Bernard II Tumapaler , in Aquitaine and Poitou his brother Wilhelm VII. Guido was the youngest son of Duke Wilhelm V and his third wife Agnes of Burgundy . He was the brother-in-law of Emperor Heinrich III. who married his sister Agnes de Poitou .

He became Duke of Gascony during the reign of his brother William VII in Aquitaine. Gascony had come to the Ramnulfides through William V's marriage to Prisca of Gascogne, a daughter of Duke Guillaume Sanche ; Guido became a duke, although he was not a descendant of Prisca.

William VIII was one of the leaders of the allies who came to the aid of Sancho I Ramirez , King of Aragón , in the siege of Barbastro in 1064 . This was the first campaign organized by the Pope , here Pope Alexander III. , against a Muslim city - an anticipation of the later Crusades . Barbastro was conquered, the inhabitants were killed, immense booty was taken; however, the city was lost again after a few years. The marriages that Wilhelm’s daughters made with rulers of the Iberian Peninsula indicate the priority Wilhelm gave to politics south of the Pyrenees .

Wilhelm VIII married three times and had at least five children. After divorcing his first (no children) and second (daughter) wife, he married a much younger woman who was related to him. This marriage produced a son, and William VIII had to travel to Rome in the early 1070s to get the Pope to recognize his children from this third marriage as legitimate.