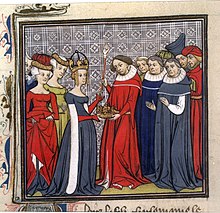 In February 856 engaged Charles the Bald the first nine years of Ludwig with a daughter of the Bretons princes Erispoë and endowed him with the Dukat Maine from, an area that he himself had enjoyed before his accession. It is unclear whether Ludwig already received the royal dignity for a sub-kingdom of Neustria on this occasion . The marriage plan failed, however, and insurgent nobles, among whom Robert the Brave played a leading role, drove Ludwig from Maine in 858. Ludwig returned to his father's court. In 860 he gave him the Abbey of Saint-Martin de Tours , that is, their income; At that time it was customary for secular lords as " lay abbots " to "own" monasteries, that is, to receive their income without bothering about spiritual matters. In 861, Karl Ludwig nominally transferred the protection of the empire from the Normans, but although Ludwig was already fifteen years old and thus, according to the opinion of the time, an adult, this function was not connected with an independent authority. Karl reconciled himself with Ludwig's main opponent Robert the Brave. When Karl also withdrew the Abbey of Saint-Martin from his son in 862 for political reasons in favor of Robert the Brave, Ludwig left the court, went to the Breton prince Salomon and rebelled against his father. With Breton troops he attacked the Anjou , the county of his adversary Robert, and plundered there. On the retreat Ludwig and the Bretons were attacked and defeated by Robert. In the same year 862, Ludwig had to submit to his father and swear allegiance to him.

In 865 there was a compromise between King Karl, Ludwig the Stammler and Robert the Brave. Robert renounced his county Angers (Anjou), which Ludwig received; for this Robert was compensated in Burgundy. When Robert fell in the battle against the Loire-Normans the following year , Charles redistributed the offices and benefices . He took the county of Anjou away from Ludwig, but in March 867 he gave him the dignity of a sub-king of the Aquitaine .

Charles the Bald died on October 6, 877 after he had designated Ludwig as his successor in writing. Thereupon Ludwig was anointed and crowned king on December 8, 877 in Compiègne by Archbishop Hinkmar of Reims . Previously he had won the support of the great by dividing counties and abbeys among them. On September 7, 878, the coronation was repeated in Troyes by Pope John VIII . Ludwig died in Compiègne the following spring; he was buried in the local Abbey of Saint-Corneille .

First marriage: Ludwig II married Ansgard , daughter of Count Harduin, in March 862 ; the marriage was divorced after 866, Ansgard died on November 2nd, probably after the year 879.