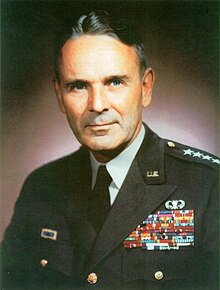 The rise of Taylor began during World War II in the 82nd Airborne Division of the US Army under General Ridgway . His diplomatic skills were first challenged when he was sent to Rome in September 1943 to organize the defense of Rome with the new Italian government by Italian troops and the 82nd US Airborne Division still to be deployed. Taylor operated in his US uniform despite the danger of falling into the hands of German troops. This mission failed due to the rapid advance of German troops (→ Axis case ); nevertheless, his efforts and the risk he took on were noticed by the high command of the Allied forces. After the commander of the 101st Airborne Division Major General William C. Lee suffered a heart attack, Taylor was transferred to command of the division.

On the night before D-Day on June 6, 1944, Taylor jumped over Normandy with the 101st Airborne Division . He had previously instructed the soldiers in his division not to take any prisoners. He led the association until the end of the war. From September 4, 1945 to January 27, 1949, Taylor was Superintendent of the US Military Academy West Point . In 1949 he was promoted to Chief of Staff of the US Forces in Europe . Between 1949 and 1951 he was in command of the US sector and the Allied troops in Berlin , where he became known, among other things, as a hobby magician. In 1951 he became Deputy Chief of Staff of the Army. 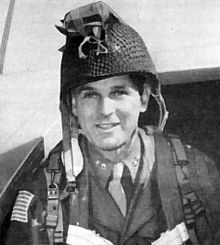 In 1953 he also took part in the Korean War as Commander in Chief of the 8th US Army . From November 3, 1954 to June 5, 1955, he held the position of Commander-in-Chief of the US Land Forces in East Asia. From 1955 to 1959 he was Chief of Staff of the United States Army . He succeeded Matthew B. Ridgway and was responsible for the readiness of the US Army. During his tenure, he began to restructure the armed forces to better suit the realities of the new nuclear warfare .

General Taylor withdrew from active duty in July 1959 in protest against President Eisenhower's strategy of massive retaliation and put forward his own concept: his book The Uncertain Trumpet became the model for the security policy of the Kennedy administration. President Kennedy brought him back in 1961 as a close advisor to the President on military matters, who organized the interaction of the various military branches. From 1962 to 1964 he held the position of Chairman of the Joint Chiefs of Staff . Taylor's thoughts flowed into the NATO doctrine of Flexible Response, which was officially valid from 1967 .

From June 23, 1964 to 1965, he was the successor to Henry Cabot Lodge US Ambassador to South Vietnam . He was adviser to the President and Chairman of the Foreign Intelligence Advisory Board from 1965 to 1969 and President of the Institute of Defense Analysis from 1966 to 1969.

Taylor died in Washington on April 19, 1987 and was buried in Arlington National Cemetery.

Selection of decorations, sorted based on the Order of Precedence of the Military Awards:

Commanders of the American Sector of Berlin

Chair of the Joint Chiefs of Staff

Chiefs of Staff of the Army