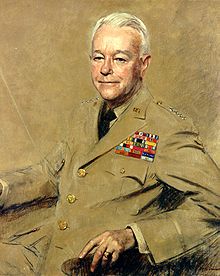 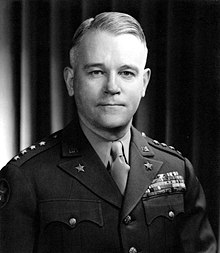 Joseph Lawton "Lightnin 'Joe" Collins (born May 1, 1896 in New Orleans , Louisiana , † September 12, 1987 in Washington, DC ) was a general in the US Army . He led the VII US Corps during the liberation of Western Europe in World War II and was Chief of Staff of the Army during the Korean War .

J. Lawton Collins, as he wrote himself, was born in New Orleans in 1896. His father, Jeremiah Bernard Collins, an Irish immigrant and a veteran of the Union Army , owned a grocery store in Algiers, Louisiana. His mother was Catherine Lawton. His older brother James (1882–1963), a cavalry officer, was best known as Adjutant General John J. Pershings . He also became a general in World War II.

Collins enrolled at the university of his home state at the age of 16, but left it again after a year because - following the example of his brother - he had qualified and been accepted for the US Military Academy at West Point . He graduated there in 1917 and in April of the same year his officer's commission as a second lieutenant of infantry in the 22nd Infantry Regiment. As usual in the newly established National Army , the other promotions followed quickly one another. He was promoted to first lieutenant in May and provisional captain in August . After attending the Infantry School of Arms at Fort Sill in the same month, he served with his regiment at various locations in the United States for the next two years . In June 1918 he became a final captain and in September of the same year - again with a provisional rank - major .

In 1919, the First World War had just ended, he went to Europe as commander of the 3rd battalion of his regiment and was downgraded to his regular captain rank from 1920 to 1921, after the National Army was disbanded , and was assistant chief of staff for operations, planning and training of Staff G3) at the headquarters of the US occupation army in Koblenz . There he married Gladys Easterbrook in 1921. The marriage had three children.

Collins was an instructor in the Chemistry Department at West Point from 1921 to 1925 and received his Company Officer degree from the Infantry School at Fort Benning in 1926 .

(from left to right: Bradley , Gerow , Eisenhower and Collins

After he had been promoted to colonel in June 1940, Collins was appointed major general and commander of the 25th US infantry division, with which he also fought on Guadalcanal , in December 1941 . On D-Day , in June 1944, he led the VII. US Corps on the beach section of Utah , which he directly to the 1st US Army and Omar Bradley , and since August 1, 1944 Courtney H. Hodges assumed was. With this corps he also conquered Cherbourg and later occupied Cologne and Aachen . In April 1945 he was promoted to Lieutenant General .

After the war ended, he headed the United States Department of Defense information department . In 1947, Collins became Bradley's deputy , who was now Chief of Staff of the Army . After Bradley's promotion, Collins followed him to the post of Chief of Staff in August 1949. He remained in this position until August 1953, after which he represented the United States on the NATO Council. Collins became in November 1954 under General Dwight D. Eisenhower - now US President - special envoy in Southeast Asia . In March 1956 he finally retired.

Joseph Lawton Collins died of heart failure in Washington, DC on September 12, 1987 , after which he was buried in Arlington National Cemetery.

Selection of decorations, sorted based on the Order of Precedence of the Military Awards:

Chiefs of Staff of the Army

Vice Chiefs of Staff of the Army