While studying (painting by Nikolaus Gysis , oil on wood, 1883)

Memorization (often also memorizing , colloquially also called timpani ) is a form of learning in which the learner memorizes text, numbers or other information in such a way that he can later reproduce them faithfully on the learning template. Sequences of action such as pieces of music, dances, chess games, cooking recipes and the like can be learned by heart.

Memorization is always done intentionally ( explicitly ). Learning that is carried out casually and without conscious memorization or practice is called implicit or incidental learning .

In many cultures memorizing still constitutes a major form of learning at school, in the Western world u. a. for multiplication tables and spelling .

In traditional Judaism , and to this day in Orthodox Judaism , memorizing the Holy Scriptures ( Tanakh , Talmud ) is an important part of religious study, although only a few exceptional scholars knew entire books by heart; mostly only individual sections or text passages are learned by heart. This practice originated at a time when written fixings e.g. For example, the Talmud was not yet available and knowledge of the text was passed on from fathers to sons.

There is also a significant tradition of memorization in Christianity . It is not certain whether Jesus himself induced his followers to memorize important sayings. The Fathers of the Church recommended memorizing parts of the Bible , especially the New Testament and the Psalms . In modern times, memorizing the catechism has also become common. Martin Luther recommended memorizing his Little Catechism .

Up to the present day, the practice of memorizing scriptures by heart, etc. a. received in English-speaking countries. There are even digital learning systems there today that help you memorize scriptures.

Even the Islam has a great tradition of memorization. A Hafiz , a believer who has memorized the entire Koran , is highly respected among Muslims . Memorizing the Koran (ḥifẓ) is an essential part of the curriculum in Koran schools ; the students begin around the age of five.

Buddhism is the most important of the non- monotheistic world religions in which memorization was traditionally widespread . The traditional teachings of the Buddha in particular were learned by heart from Buddhist literature .

The Vedas were originally passed down orally before they were written down from the 5th century. If a Brahmin could recite all four Vedas, he was called Chaturvedi . The tradition of Vedic recitation continues.

The following important information is missing from this article or section:
Unfortunately nothing about the work of actors, who also have to learn large amounts of text by heart.
Help Wikipedia by researching and pasting it .

Playing by heart in music 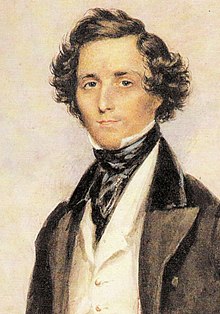 The pianist and composer Felix Mendelssohn Bartholdy was one of the first soloists to make playing by heart fashionable in Germany.

Playing compositions by heart (as a counter-term to sight reading ) is based on the memory of previous sight reading and / or what has been heard. In Western art music, making music by heart is widespread, especially among vocal and instrumental soloists. Famous soloists such as Niccolò Paganini , Felix Mendelssohn Bartholdy , Franz Liszt and Clara Wieck caused a sensation when they introduced this practice in Europe from the 1830s. Playing by heart not only had an audience-effective appearance of improvisation, but also gave the soloist additional freedom in interpretation.

In contrast to learning by heart through sight reading, the Suzuki method is based on the principle that children should learn to play an instrument by listening and acting out. Ultimately, however, it is also a form of learning by heart with the help of hearing.

The ability to grasp pieces that have only been heard once in such detail that they can even be written down later is found only in a few exceptionally talented musicians; 14-year-old Mozart is said to have written down a complex polyphonic Miserere by Gregorio Allegri after hearing it only once.

Since the spread of Scripture, memorization has been used at all times to keep text and other information out of the reach of unauthorized persons.

The Lithuanian Holocaust survivor Mascha Rolnikaitė memorized parts of her diary in the Vilnius ghetto in order to prevent incriminating evidence against her and her family from being used.

Many texts by the Russian poet Ossip Mandelstam , who was politically unpopular under Stalinism, have only survived because his wife and friends learned them by heart.

During the Chinese Cultural Revolution , in the course of which much of Tibetan literature was destroyed, the traditional memorization of these texts made it possible in many cases to reprint the books abroad.

Also Ray Bradbury used the subject in his 1953 novel, Fahrenheit 451 .

As early as 1908, the British experimental psychologist William H. Winch demonstrated in a series of experiments that memorizing meaningful or meaningless content has a measurable (transfer) effect on the ability of students to remember things that they have understood.

As the American psychologists Jeffrey Karpicke and Jannell Blunt have shown in experiments, college students learn and understand science material better when they work through the text repeatedly and memorize it than when they try to illustrate and acquire the content with the help of concept maps . Only when entering a completely new field of knowledge do learning aids such as concept mapping prove to be more efficient than memorization.

“But also your own memorization and memorization of poems, or passages from poems, beautifies the lonely life, and often elevates in important moments. From my youth I carry passages from Homer, Göthe and Schiller which return to me at every important moment and which will not leave me in the last of my life either. Because there is nothing better to do than go over with a big thought. "

When he began to reform the Prussian school system in 1809, however, he advocated that the students should not learn by heart, but understand and understand what they are doing.

Under the influence of reform pedagogy , the interpretation of memorization as the opposite of learning to understand was further consolidated. Rousseau was already a staunch opponent of memorization. Also Basedow and Pestalozzi reported that would hardly memorized in their schools.

While skills and automated courses of action are “stored” in procedural memory , what has been learned by heart goes into declarative memory , which is neurologically assigned to the neocortex .

Some savants and some people on the autism spectrum also have extraordinary memories ; it is often unclear which mnemonic techniques they use.