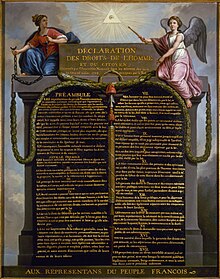 The Declaration of Human and Civil Rights , illustration from 1789

The terms western world , the west , western high culture or the west ( Occident ) can have different meanings depending on the context. The term “West” or “Occident” arose as a counterpart to the “ Orient ”, which Luther first used in his translation of the Bible, and was introduced into German by Kaspar Hedio in 1529. While the term originally referred to Western European culture, today it is mostly related to common values ​​of the nations in Europe and North America , which guarantee civil and human rights, live according to Western values ​​such as freedom , the rule of law , equality , individualism and tolerance and practice liberal democracy . The social systems of the western world are based on the economic system of the market economy with free wage labor and are historically shaped by Christianity , but later largely by the Enlightenment . This also includes the earlier colonies , which are closely related linguistically and culturally, such as Latin America or Australia , whose ethnic identity and dominant culture were derived from Europe.

To define what is typical of Western society and culture, one has to understand the context. The definitions of the west differ depending on the time and context. It is not always clear which definition is used.

The Hellenic distinction between Greeks and barbarians anticipates the division between East and West. A distinction was made between the Greek- speaking culture of the main country Greece , the Aegean and Ionian coasts and Magna Graecia in southern Italy and the surrounding non-Greek cultures of the Persian Empire , the Phoenicians and Egypt . The division can be traced back to the Trojan War , which traditionally took place from 1194 to 1184 BC. Is dated. If it had a historical basis, the conflict between the Achaeans and the non-Greek Trojans was fought in western Anatolia . The Greeks considered the Persian Wars of the early 5th century BC. Chr. As a conflict between East and West.

The Mediterranean was united by the Romans, but differences remained between the western half of the empire, where Latin was mainly spoken, and the urbanized eastern half, where Greek was the lingua franca . In 286, the Roman Emperor Diocletian divided the Roman Empire into two regions, each of which was administered by an Augustus and a Caesar (of the Tetrarchy ). At the end of the 5th century, the western half of the empire transformed into several Germanic-Romanic empires , which became the basis for the further state development of Western Europe. The empire in the east, now called Byzantine , lasted until the end of the Middle Ages .

In the 4th century Christianity had become the state religion in the Roman Empire. In many places in the West, the church organization survived the decline of the state organization at the end of antiquity and persisted beyond the borders of the early medieval Germanic successor states. The leadership of this western church fell to the Pope (the Patriarch of Rome ), who finally withdrew from the control of the emperor in Constantinople with the coronation of the Frankish king Charlemagne . The leadership of the Eastern Church actually fell to the Patriarch of Constantinople after the other patriarchates had lost their importance due to the Islamic expansion. Both churches developed separately in the Middle Ages and evangelized Northern Europe, which previously did not belong to the Roman Empire, namely the Western Church in the north-west and the Eastern Church in the north-east of Europe. In 1054 the Great Schism officially ruptured between the Western and Eastern Churches, and in 1204 the Frankish Crusaders conquered Constantinople during the Fourth Crusade, thereby deepening this contrast. 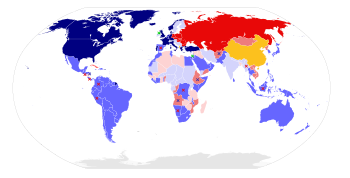 A new definition emerged during the Cold War . The earth was divided into three "worlds". The First World , also known as the West, included NATO members and other US allies . The "Second World" was the Eastern Bloc under the influence of the Soviet Union , which also included the Warsaw Pact countries . The Third World consisted of the non-aligned states , including India , Yugoslavia and, at times, China , although the latter two (Yugoslavia and China) are classified in the Second World because of their communist ideology .

There were some states that did not fit into this scheme, including Switzerland , Sweden and Ireland , that opted for neutrality . Finland was under the influence of the USSR, but remained neutral and was neither communist nor a member of the Warsaw Pact or the Comecon . When Austria became an independent republic in 1955, it did so on condition of remaining neutral, but as a state west of the Iron Curtain it was under the influence of the United States. The Turkey was a NATO member, but was not considered part of the First or Western world. Spain did not join NATO until 1982, shortly before the end of the Cold War and after the death of the authoritarian dictator Franco . With the exceptions mentioned, the western world became a synonym for the first world.

Greece and Portugal , like Turkey, were members of NATO but were only recognized as part of the West after they introduced democracy and brought their economies into line with First World standards during the 1970s. Australia and New Zealand, and later Israel and Cyprus , did not become NATO members, but part of the First World because of their democracy, high standard of living and European culture.

After the cold war

After the end of the Cold War, the term “second world” was no longer used and “first world” now referred to the democratically, financially and industrially developed countries , most of which were allied with the United States. The poor, non-industrialized developing countries were now referred to as “Third World” . The term “western” therefore requires less a geographical than a cultural and economic definition.

Today people differ in their definitions of the Western world and the various definitions only partially overlap. There are non-western industrialized countries, not all western countries are NATO members, etc.

“Western world” is often synonymous with “first world” to emphasize the difference to the developing countries of the third world. The expression “the North” has replaced the term “the West” in some contexts, especially when it comes to criticism and a stronger demarcation between West and East. The north provides some geographical clues as to the location of wealthy states, most of which are in the northern hemisphere . However, since most countries are generally in this region, this distinction was considered by some to be unusable.

The 34 states in the OECD , which include most of the EU member states , Norway , Iceland , Switzerland , Canada , the United States , Mexico , Australia , New Zealand , Turkey , South Korea , Japan , Chile and Israel , are roughly with identical to the "First World".

The existence of "the north" implies the existence of "the south" and the socio-economic boundary between north and south. Although Cyprus and Taiwan are not OECD members, they could also be viewed as western or northern countries, as their living standards and social, economic and political structures are similar to those of the OECD.

In academic articles, the term “western world” is only used in the context of areas and times that were under the direct influence of the Western Roman Empire . The term is also used pejoratively by critics of Western influence and the history of imperialism and colonialism .

The “West” can also be related to the cultural and social conditions of Western society. In this context, large parts of South America could be seen as part of the West because of its high culture and literature . Exceptions are the highland regions of the Andean Community , which have preserved a distinct indigenous culture.

The former crown lands of Austria-Hungary ( Czech Republic , Slovakia , Slovenia , Croatia and Hungary ) are also included in the western world. These states were very much shaped by the Central European culture. This is still reflected today in the everyday life of society and in the history of these countries. Although Hungary, the Czech Republic and Slovakia were part of the Eastern Bloc from 1945 to 1990 , and Slovenia and Croatia were part of the former Yugoslavia and thus part of the non-aligned movement .

In the Near and Middle East (both relative to western Europe) the distinction between western and eastern Europe is less important; Countries that Western Europeans view as part of Eastern Europe (e.g. Russia ) count as Western in the Middle East in the sense that they are both European and Christian.