This article explains the cut and gemstone, for other meanings see brilliant (disambiguation) . 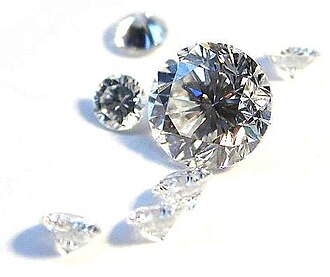 A diamond (from French brilliant , 'shiny', 'radiant') is a diamond with a special cut . However, the terms “diamond” and “brilliant” are often used incorrectly synonymously.

The cut is called brilliant cut and was developed around 1910. It is characterized by high brilliance . Additional information on diamonds such as "real" etc. is not permitted as it is misleading. It is possible - and not uncommon - to process other gemstones or imitations in brilliant cut, but these must then be clearly labeled (e.g. " brilliant cut zirconia ").

Features of the brilliant cut

Features of the modern brilliant cut (also called full brilliant cut ) are a cut with a circular girdle , at least 32 facets plus table in the upper part, at least 24 facets plus, if necessary, culet in the lower part, i.e. at least 57 facets. It was developed around 1910 from the old cut of the previous century.

There are different variants today. Here are some of the predominant ones:

Fine-tuning according to Eppler & Klüppelberg

Due to the largely fixed proportions of diamonds, it is possible to determine the approximate weight based on the diameter.

The development of the brilliant cut 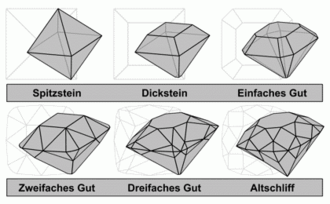 The diamond has been used as a gemstone for at least 2000 years , but targeted processing only began in the 14th century. Initially, however, the natural crystal surfaces were only polished to increase the optical effect. This first diamond cut, which was largely left in its natural form, was called a pointed stone , according to its characteristics . By splitting off or grinding the tip of the octahedron, an additional large area was soon created on the upper side ( table ) and a small one on the underside ( culet or rib ), which led to thick stone or table stone .

Since the end of the 15th century, thanks to the development of the grinding wheel, more and more additional facets were created. Around 1650 - according to tradition, at the suggestion of the French Cardinal Mazarin  - a stone with 34 surfaces (32 facets plus table and culet) and a rounded, if not yet circular, ground plan ( girdle ) was developed for the first time. This double good or Mazarin cut was given a triple good or Peruzzi cut at the end of the 17th century by the Venetian gemstone cutter Peruzzi . This already had all the facets and similar proportions of the later brilliant cut. But even with the old cut , the immediate forerunner of the modern diamond, the circular body has not yet been consistently implemented. This only happened at the beginning of the 20th century.

Since the diamond, especially in a jewel-worthy quality, is a very expensive raw material because it is rare and requires great effort, the aim is of course to always work as efficiently as possible when grinding. This means that you try to achieve the greatest possible optical - and thus value-increasing - effect with the least possible loss of material.

In the 1970s, the zirconia diamonds (synthetic fianite, ZKS) caused a sensation, as they are a good imitation of the diamond. However, they are easy to distinguish due to their low thermal conductivity .

Even the moissanite , after the diamond the hardest known naturally occurring mineral working in brilliant cut, its crystal structure allows these touches. It then has even more brilliance than the diamond because its refractive index is significantly higher. A differentiation from diamonds is difficult in a set form. The price of moissanite is low and they have been synthetically manufactured since 1979 (C3 Inc., North Carolina) and have been on the market since 1998, mostly as a small commodity.

The process from the raw material to the finished cut goes through five phases:

Diamonds are traded commercially on special exchanges by professional traders, with the diamond being the most important cut. The prices for individual stones differ significantly in some cases. Every year, multi-page tables such as the Rapaport Diamond Record are issued to dealers so that they can estimate the price of a stone. The price per carat depends on the size category of the diamond, a single large diamond logically has a higher price than several small diamonds that weigh the same. With the four Cs , the color and the purity (the absence of inclusions) play a special role. The former classification is carried out with the aid of comparison stones through the eye, the latter with the aid of a magnifying glass or a microscope. For example, a 1-carat diamond in the best color and clarity category D-IF cost around 28,000 euros in 2012, while a stone of the same weight in the M-I3 category only cost 1,100 euros. A faulty cut can also reduce the price. In most countries only certified stones are traded to curb the blood diamond trade .