The Fork Age ( Faroese : Gablatíðin ) is a chapter in the history of the Faroe Islands and lasted from 1655 to 1709 . It takes its name from the Danish feudal lords Christoffer Gabel and Frederik Gabel , who exercised “almost total political and economic control” over the Faroe Islands .

Christoffer von Gabel (1617–1673) was not only the most powerful man on the Faroe Islands, but also at the court of Denmark, where he was repeatedly employed as a financial juggler and secret diplomat.

The fork time is widely considered to be the darkest phase in Faroese history. It is part of the history of the monopoly trade over the Faroe Islands (1529–1856). The Gabels never set foot in the Faroe Islands, but treated them like their property, which the islands were in fact due to the fief of the Danish krone. Their corrupt and incompetent local representatives not only squeezed out the Faroese economically and led them into bitter poverty, they also interfered politically in all areas of life, which led to a total incapacitation of traditional local structures. Under the leadership of the Tórshavn pastor Lucas Jacobson Debes , however, resistance also formed.

Fief over the Faroe Islands

The most important export goods of the islands, which then had about 4,000 inhabitants, was the Faroese wool from the approximately 70,000 sheep. Knitwear and raw wool were of exceptional quality. In addition, to a lesser extent, butter and were Tran made. The treeless islands, which were poor in natural resources, were never a gold mine ; accordingly, they were hit hard by the regime of the Gabel, who only thought of their personal merit and were never interested in the country and its inhabitants.

In 1655 the indebted Danish King Frederik III. the Danish colony of the Faroe Islands to his close advisor and financier Christoffer Gabel as a fief for an annual lump sum of 1000 Reichstalers. How Gabel should deal with his property was up to him. In 1662, the king gave Gabel the trade monopoly over the Faroe Islands , which was previously held by the Icelandic Company (1619–1662). Gabel delegated it to the Danish-Dutch merchant Jonas Trellund (1630–1681). With the transfer of the trade monopoly, Gabel got the Faroe Islands as a fiefdom for life with the right to bequeath it to his eldest son. The annual fee due to the king until then was also completely waived. 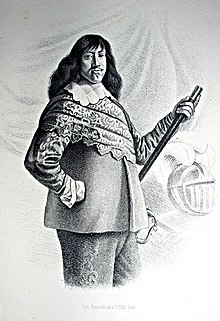 King Frederik III. could always rely on his confidante Christoffer Gabel. They knew each other from the time he was still Archbishop of Bremen. Gabel stood by his side until his death - until his son Christian V dropped him.

This fundamental change in Copenhagen policy must be seen in the context of the upheavals there. The introduction of absolutism in Denmark by Frederik III. 1660 did not only happen with decisive mediating activity by Christoffer Gabel, but also resulted in the fact that the bourgeoisie, namely the royal officials (Gabel's layer) were given special rights to approve the “contractual coup ”, while the Danish Imperial Council as The representative body of the nobility lost its control over the king.

In material terms, the bourgeoisie was given access to real estate and all civil servant positions for the first time. This led to the sale or leasing of crown land to fill the treasury. As a skilful businessman, Gabel made a special contribution to this “modernization” of the Danish state from the king's point of view, acquired his “lifelong grace” and was richly rewarded with the privilege over the Faroe Islands, while the king was able to expand his absolute power.

Gabel was represented in the Faroe Islands by a Vogt (the Fúti ). In addition, all other leading positions were occupied by his people. Only the Løgting still existed, but was largely powerless. The Løgmaður was determined by Gabel. Critics were in the celebrations Skansin imprisoned and sometimes hanged. Protest resolutions by the Løgting did not reach the king, as Gabels Vogt controlled all shipping traffic and the Faroese did not have their own seaworthy ships at that time. 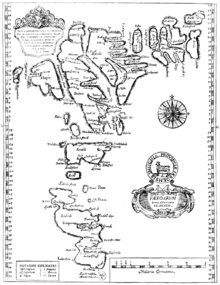 Among the Danish representatives on the islands, however, was a man who would subsequently become a freedom hero: the priest Lucas Jacobson Debes . He wasn't one of Gabel's people and felt the oppression himself.

Debes tried several times to come to Copenhagen without success. Only after the death of Frederik III. In 1670 a representative of the new king, Christian V , visited the Faroe Islands. Debes came to him with a delegation of Faroers and was then allowed to travel with this delegation to Copenhagen in order to present the complaints to the king there. At that time, Christoffer Gabel had already fallen out of favor because of his domestic intrigues at court.

During his stay in Copenhagen, Debes wrote Færoæ et Færoa Reserata, the first ever book on the Faroe Islands, which was published in Copenhagen in 1673. At that time it established the world's knowledge of the islands and their inhabitants. A royal commission of inquiry made its way to Tórshavn, but there Gabel's trading houses on Tinganes were already on fire . In the great fire not only all evidence of Fabel's regime was destroyed, but also most of the old documents of the Faroe Islands, especially the Løgting, which was then also on Tinganes.

"Since the time of the reform of religion, this land has not been given to any royal servant of the state, as a fief or office: Rather, Your Majesties the kings have always held their own bailiff who rules the country and has received the royal income. [...] In our times, however, the Weyland Most Serene King, Friederich, the third most commendable memory, was pleased, Your Excellency, Herr Christoph von Gabel, Your King. Majest. Lieutenants, Privy Councilors, and assessors of the State Assembly, with this country as an office. He received not only the income of this country, but also the jurisdiction, and thereby the freedom to keep his own bailiff or agent there, and to organize trade and merchants as he pleases. "

To make matters worse, there was a French attack on the Faroe Islands in 1677. Tórshavn was sacked. In 1688 Christian V. Norske Lov (Norwegian law) came into force in the Faroe Islands. The rule of the Danish state over the archipelago was perpetuated and the rights of the Løgting were further reduced.

It was not until 1709, after the death of Frederik Gabel , that a commission finally traveled to the Faroe Islands under the new King Frederik IV . The trade monopoly was taken back into the hands of the Crown and the island administration commissioned. It included Jørgen Kristian Klein , Rasmus Juel and Samuel Pedersen . Klein was replaced by Didrik Markussen in 1715 .

As a result, the Faroe Islands were administered from 1720 as a Danish office by the Amtmaður (bailiff), an official of the king. Normality in relation to the fork time was restored, but it would be until 1856 before the royal monopoly trade (which had advantages and disadvantages for the islanders) was lifted, and another 100 years until the islands became largely a nation within the kingdom in 1948 Gained autonomy .