A Faroese in traditional costume on the national holiday (1984)

If you take both aspects together, in particular nationality and language identity, the Faroese are the smallest nation in Europe .

Färinger is borrowed from the Danish færing , which in turn goes back to the Old Norse færeyingr , from which the New Faroese føroyingur was formed, each synonymous with residents of the Faroe Islands . The Old Norse word is broken down into fær-ey-ingr, German for "sheep island residents".

-ing - is acommon suffix in the Germanic languages thatdenotes the inhabitant, resident, compare something from the German-speaking area with the place name Hedingen , which means "among the members of Hadu / Hado", "among the Hadu / Hado people" . In the Faroe Islands, this suffix is ​​still alive today, that's the name of a resident of Klaksvík klaksvíkingur .

The ellipse (omission) of the word component oy "island" in the Faroese pronunciation "föringur" led to the Danish term fær-ing . In Danish the plural form is færinger . This is in German - as there is with the German inhabitants suffix -er is contaminated - in the singular used.

The previously often used in German adjective Faroese that of Faroese is derived is from Faroese and other Scandinavians considered false. Today Faroese prevailed.

The Faroe Islands, formed according to German word formation criteria, is also common in German to denote the people . 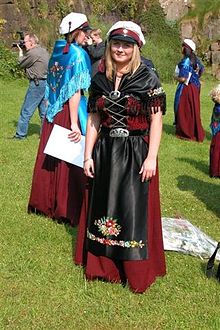 The Nordic settlers came in the wake of conquest as emigrants from Western Norway - the dialect matches are still numerous - and the Norwegian conquered areas of Scotland , Ireland and the Isle of Man . This also brought Celtic influences into the country, which, according to many Faroese, can be proven not only in some place names on Suðuroy , but also in a certain class of people .

From 999 the Faroese were Christianized , the Viking Age in the Faroe Islands was over, and the islands came under Norwegian rule from 1035 . Since the personal union between the kingdoms of Norway and Denmark was terminated in the Peace of Kiel in 1814 , the Faroese are finally subjects of the Danish crown. Since 1948 they have been recognized as a self-governing national community within the Danish Empire (Danish: "Selvstyrende Folkesamfund i Det Danske Rige"). In the Faroese personal documents, the nationality behind Danmark is therefore Føroyingur , ie: "Nationality: Denmark, Faroese".

Today, in addition to 5% (ethnic) Danes, there are also (comparatively) many Greenlanders , Icelanders , Norwegians , Britons and Poles , a total of 77 nations.

Many of today's Faroese descend from isolated immigrants who came from the Scandinavian countries and the British Isles or Germany in the 18th or 19th century. The latter can be seen in well-known family names such as von Elinborg Lützen . Other families of German origin came to the country as Danes who were already resident there, such as in the case of the paternal line of V. U. Hammershaimb , to whom the Faroese owe their written language. A well-known case are the many Faroese with the family name Debes or Debess. They are all related to Lucas Debes ' sister, who came to the Faroe Islands with him from Denmark. 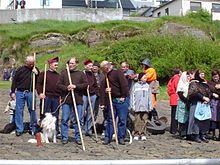 The church and religion plays a far more important role than in most European countries in the everyday life of the islanders. Faroese are considered "Scandinavian reserved", helpful and extremely hospitable. Due to the remote island world and the relatively small population, you are "among yourself". The Faroese have a very good educational and social system and live in a modern industrial and service society that is largely dependent on fishing . On the other hand, with the Faroese chain dance , they have saved a medieval relic in the everyday culture of modern times that is unparalleled in Europe.

The Faroese people have created their own art , literature , music and theater scene . The Faroese are particularly hungry for reading. In no other country on earth are as many book titles published per capita as in the Faroe Islands. Faroese art critic Bárður Jákupsson wrote of his compatriots:

“The prerequisite [for artists to develop and grow in this small country] is first and foremost an active audience. The approx. 17,000 inhabitants of their capital make up a particularly committed art audience that you can hardly find anywhere else - Tórshavn should actually be world-famous for that. "

“It is noteworthy that, unlike their colleagues in other small countries, Faroese artists never discuss the danger of provincialism. In that sense you are yourself enough, but not meant negatively. The fear of provincialism is in its own way a defeatist fear that is not used for anything creative - if you are afraid of becoming provincial, you are already - the fear itself is provincial. "