07 Vestur ("07 West") is a Faroese football club based in Sørvágur on the island of Vágar .

At the end of 2007 it was decided to merge with SÍ Sørvágur again, like the previous club , which officially came about on November 6, 2007. 07 Vestur was announced as the new name . This relates on the one hand to the year of foundation and on the other hand to the position of the island of Vágar (7 ° west longitude). In the first season under a new name, the 1st Deild immediately succeeded in being promoted to the Vodafonedeildin as the first placed, but as the last placed, the descent followed immediately. In 2010, 07 Vestur took first place in the second division again, but could only stay in the top division for one year. The same situation was repeated over the next two years. After two third places, he was promoted to the first division in 2016 as a runner-up. The penultimate place was occupied there. However, since only one A-team belonged to the top three teams in the second division and teams with a lower ranking are not eligible for promotion, this meant relegation for 07 Vestur. In 2018, the team ended up in last place, in the 1st Deild as fourth-placed, the direct rise was missed. 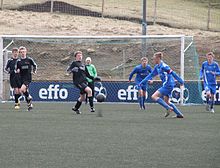 The record player in the first division is Tór-Ingar Akselsen with 100 games. Akselsen and the Brazilian Clayton Nascimento scored the most goals in the Betrideildin with 14 each (as of the end of 2019).