The airport Heringsdorf is a commercial airport on the island of Usedom . It lies on the territory of the communities of Garz and Zirchow . The flight offer includes domestic German scheduled flights , charter flights to foreign destinations for vacationers and business travelers as well as sightseeing flights in the region. The number of passengers was 31,038 in 2018.

Departure to the south

The Heringsdorf regional airport is one of the oldest German air destinations and was the second oldest airport on the territory of the German Democratic Republic (GDR) after Leipzig-Mockau Airport, which was operated as a regular service until 1972 and as a commercial airfield until 1991 .

The parade ground of the Swinoujscie garrison was already approached in 1911 by the Rumpler Taube of the imperial army . The history of the airport began in 1919 as the “Swinoujscie Land Airfield” of the neighboring city. The square was expanded by Sablatnig-Flugzeugbau GmbH after the First World War . The first airliners to fly to today's Heringsdorf Airport were SAB P III for six passengers. Glider pilots also trained here in the 1930s.

In 1935 the air force of the Wehrmacht took over the airfield and had it expanded into Garz air base in the following years. From 1936 the coastal hunting squadron 3/136 was stationed here. This was equipped with Heinkel He 51 aircraft. During this time, an aerobatic team was set up, which flew with Bücker Jungmeister machines . In 1937 the unit received first Messerschmitt Bf 109 fighter aircraft and a short time later Bf 110 as well . For training on the Bf 110, a firing range was created east of the airfield in the direction of Kamminke . In the final years of World War II , the runway was expanded to accommodate larger machines such as the He 177 long-range bomber . While the surrounding villages were exposed to air raids by the Red Army on May 4, 1945 , the airfield that had already been vacated remained undamaged and was occupied by Soviet troops the following day.

The following table shows the complete list of all active flying units (excluding school and supplementary units) of the Wehrmacht Air Force that were stationed here between 1937 and 1945.

After the war, the 12th and 314th Fighter Regiment (IAP), the headquarters of the 601st Attack Airplane Division (SchAD) and tank troops of the Group of the Soviet Armed Forces in Germany (GSSD) were stationed here. From 1960, the Transport Flieger-Trainingsgeschwader 14 (TFAG-14) of the National People's Army (NVA) used the western part of the area. After its dissolution in 1962, the area served as an alternate airfield for various formations of the GDR's air forces . Until the early 1960s, the runway was an articulated taxiway made of patented steel segments. In 1962, part of the airfield was converted for civil use by the GDR airline Interflug and the Garz air base was given its current name: "Heringsdorf Airport". A new runway had to be built to enable heavier aircraft like the Ilyushin Il-14 to land. In 1973 a terminal building for Interflug's seasonal air traffic was put into operation. There were flight connections to Berlin , Dresden , Erfurt and Leipzig , among others . Six years later, Interflug stopped regular domestic flights to and from Heringsdorf, but operated charter flights to Prague in the summer months of 1979, 1980 and 1981 . This was carried out with an Ilyushin Il-18 from Interflug. According to the flight plan, there was a special feature in the summer of 1964. Here a Sunday flight with the Il-14 to Barth was carried out. The flight time was 25 minutes. In 1980 the armored forces of the GSSD were withdrawn. A pioneer department remained stationed until 1992 . After the dissolution of the NVA in 1990, the military use of the site ended. The majority of the former barracks now house social facilities of the Diakonie Züssow . 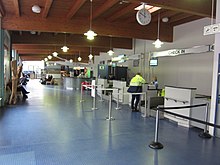 Check-in area in the terminal building

From 1993 to 1996 the flight operations areas were completely renovated, instrument approach lights were installed and a weather station was set up . Under the former airport director Ralf Giebener, there were charter flights to Istanbul and Antalya with A320 and MD 88 aircraft in 1996 and 1997, and in 1998 the regular flights were continued and charter flights to Tunisia . 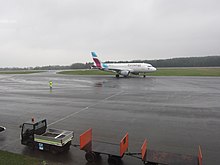 In view of the low number of passengers on scheduled services, hoteliers and a municipal tourism marketing company concluded a public-private partnership in 2007 to organize scheduled flights to the island. This enabled airlines to be won that, thanks to a ticket purchase guarantee, fly to Usedom once a week in the summer season. In 2008, the then OLT flew to four German destinations with Saab 340 or Saab 2000 . In 2009, OLT flew once every Saturday to Bremen, Cologne / Bonn, Dortmund, Frankfurt am Main, Zurich, Munich and every Sunday to Düsseldorf in the summer season. On May 1, 2010 Air Berlin opened new connections to Dortmund, Düsseldorf and Stuttgart. The planned connection to Nuremberg did not take place due to insufficient demand. The flights to Heringsdorf were for Air Berlin by the LGW with turboprop aircraft of the type De Havilland DHC-8-400 operated. In 2012, the Swiss Helvetic Airways flew for the first time to destinations in Switzerland (Bern, Zurich) and the Polish Eurolot to destinations in Poland (Warsaw, Krakow) and, from 2013, also to Dortmund and Cologne / Bonn. Germanwings flew to the island for the first time in 2014 instead of Air Berlin. The routes were served by Bombardier CRJ900 with 90 seats (operated by Eurowings ) and Airbus A319 . In the summer of 2014 there were also occasional charter flights with Austrian Airlines to Linz . A DHC-8-400 aircraft was used here. In 2016 Air Baltic and SkyWork Airlines also flew to the airport.

The leisure facility "Hangar 10" is not far from the terminal building. It consists of a small aircraft museum, a demonstration workshop, flight simulators, a game world and dining facilities. The following aircraft are shown in the museum:

All executed copies are airworthy (as of January 2020). The exhibition is supplemented by depictions of the air forces in Germany, the USA, Great Britain and the Soviet Union during World War II . In addition to the aircraft, some vehicles from the time of the Second World War are also on display. In addition, there are other non-airworthy replicas of aircraft in the static display.