The Karlsruhe / Baden-Baden Airport ( IATA code FKB, ICAO code EDPS) is the second largest passenger capacity commercial airport in Baden-Wuerttemberg . It is located southwest of Rastatt and west of Baden-Baden , near the French border on the area of ​​the Baden-Airpark industrial park . From 1953 to 1993 the site was a Canadian military airfield with the military designation CFB Baden-Soellingen , named after the nearby town of Rheinmünster - Söllingen . The airport is a base for the Irish low-cost airline Ryanair .

The airfield was built as part of NATO's European defense planning during the Cold War, initially from 1951 as a military airfield for the French Air Force .

Even before it was finally completed, it was decided to hand over the site to the Royal Canadian Air Force (RCAF), as the construction of the base in horse field originally intended for the Canadians was delayed. The Royal Canadian Air Force Station Baden-Söllingen ( RCAF Station Baden-Söllingen for short ) was subordinate to the 1st Air Division (RCAF) in Metz and at the beginning of September 1953 became the home base of the 4th (fighter) wing , 4th (fighter) wing , to which three flying squadrons, the 414th , 422nd and 444th Squadron , were subordinate. The squadron was initially equipped with 62 Saber Mk.4 day fighters (from 1954 Mk.5 and Mk.6).

The 414th squadron was disbanded in July 1957 by the all-weather interceptors with the following month CF-100 Canuck Mk.4B equipped 419th Squadron replaced.

The 419th squadron was deactivated in late 1962 and the other two squadrons were converted between March and July 1963 to the CF-104 Starfighter , a reconnaissance and nuclear-weapon capable supersonic fighter-bomber . In February 1964, the 421st Squadron, previously stationed in Grostenquin , came to Söllingen as the third squadron. The 444th Squadron for its part was dissolved at the end of March 1967 and the 4th Wing was now subject to only two squadrons.

After reclassifications in the Canadian armed forces, the base was renamed Canadian Forces Base Europe, Det.Baden -Söllingen ( CFB Europe, Det.Baden -Söllingen for short , from November 1979 CFB Baden-Söllingen ) in 1968 and a battalion in addition to the air force units mechanized infantry stationed at the Söllingen site. At the same time, there was a drastic reduction in the size of the Canadian air forces stationed in Europe, which were then concentrated in Söllingen. As a consequence, the 4th Wing was deactivated in the middle of 1970 and the Söllinger squadrons, meanwhile the 421st , 439th and 441st Squadron , were directly subordinated to the newly established 1st Canadian Air Group (CAG) stationed in Lahr . You were under the 421st , 439th and 441st Squadron .

As a result of the new NATO strategy of Flexible Response , the CF-104 lost their nuclear role at the beginning of the 1970s and in the further course of the decade, NATO also built a number of so-called hardened aircraft shelters in Söllingen . The NATO Tiger Meet took place twice, in 1976 and 1983, in Söllingen, and in September 1983 a large open day was held to mark the 30th anniversary of the Air Base.

During this time extensive reconstruction work began on the base with a view to the stationing of the twin-engined multi - role fighter CF-18 (CF-188) to replace the CF-104. In May 1984 four CF-18s operated for the first time on a trial basis from Söllingen, while the three CF-104 squadrons were deactivated between November 1984 and February 1986. The conversion to the CF-18 took place in Canada. Due to technical delays, instead of the 441st Squadron, the 409th Squadron was the first CF-18 unit to move to Söllingen in June 1985. The 439th Squadron was reactivated in November of the same year and with the reactivation of the 421st Squadron in July 1986, the introduction of the CF-18 was completed.

The 4th Squadron was reactivated in May 1988 as the umbrella organization of the Söllinger Squadrons and was subordinated to the 1st Air Division , reactivated in Lahr, in place of the 1st CAG .

After the fall of the Berlin Wall in 1989, the Canadian armed forces ended their engagement in Europe. Initially, Söllinger CF-18s were used in the Operation Desert Storm . The squadrons were disbanded between June 1991 and November 1992. The last CF-18s left Germany in mid-January 1993 and flight operations ceased the following month. After a final parade on July 31, 1993, the base CFB Baden-Soellingen closed on December 31, 1993.

By 1994 cities and municipalities tried to convert the former air force base into a regional airport.

In February 1996, Baden-Airpark AG , a wholly-owned subsidiary of Flowtex AG, acquired the airport from the regional development company Söllingen, which in the meantime owned the site. Manfred Schmider and Klaus Kleiser, later condemned as fraudsters, got in with 38 million DM, the public sector contributed 57 million DM. The first charter plane took off in May 1997. In addition to the civil airport, the new owners created an industrial area in several sections on the 613 hectare site, which partly used the military buildings that were still in existence. Long-term investments of up to 800 million Deutschmarks have been announced.

The operation of the small Baden-Baden airfield Oos was relocated to Baden-Airport in 1997. In the same year Spanair handled a charter flight for the first time on the former military airfield, the destination was Palma de Mallorca Airport . In September 1998 the first scheduled flights followed by Crossair to Basel. The 100,000th passenger since operations began was recorded in May 1999, and in November the 100,000th passenger of the year. In 2000, the Karlsruhe-Forchheim airfield closed ; its function as an airfield for general aviation in the Karlsruhe region was now taken over by Baden-Airport. In the course of insolvency FlowTex the Baden-Airpark had 2000 AG in June filed for insolvency make. The Flughafen Stuttgart GmbH then took over a two-thirds stake and municipalities of the region's remaining shares. On January 1, 2001, a new Baden-Airpark GmbH was founded, which has since operated the place as the Karlsruhe / Baden-Baden Airport. According to media reports, Airpark-GmbH was in debt to the tune of 90 million euros at the time, particularly at Commerzbank, Hypovereinsbank and Sparkasse Karlsruhe, and Stuttgart Airport paid 62 million euros for the company. In addition to the actual airport site, around 20 of around 80 hectares of commercial space had already been sold.

In spring 2003 the "Airpark Business Center" was completed as the first larger new building on the industrial site. It comprises around 5,000 square meters of office space and 1,000 square meters of retail space, including the police station on the airport site. A hotel with 85 rooms was inaugurated on the site at the beginning of 2009.

In September 2005 the new terminal of the airport went into operation, which shortly afterwards handled all flight movements and is designed for a capacity of up to two million passengers a year. The construction costs for the building with 20 check-in counters were around ten million euros.

In order to increase the all-weather flight operating level from CAT I to CAT III at Karlsruhe / Baden-Baden Airport , the runway was completely renovated from March 2008 to September 2009 and the corresponding markings and the lighting required for CAT III were installed. First, taxiway G was widened for use as an interim runway, which replaced the primary runway from April 2009. This was rebuilt until September 2009, after its commissioning the interim runway to taxiway G was dismantled.

In October 2011, the low-cost airline Ryanair announced that it would be opening its fourth German base in Karlsruhe / Baden-Baden and initially stationing two Boeing 737-800s on site. There are also various charter and holiday flights to holiday destinations across Europe, especially during the summer.

In March 2016, the Hungarian low-cost airline Wizz Air Karlsruhe added to its program. The connection with Air Berlin to Berlin was initially discontinued in 2017 due to insolvency, but was taken over by Eurowings in 2018 .

Baden-Airpark GmbH has a share capital of 25 million euros and is 66.6% a subsidiary of Flughafen Stuttgart GmbH , which in turn is 35% owned by the city of Stuttgart and 65% by the state of Baden-Württemberg. The remaining third is held by Baden-Airpark Beteiligungsgesellschaft mbH , in which the eponymous cities of Karlsruhe (43.9%) and Baden-Baden (15.61%) as well as the districts of Rastatt and Karlsruhe (each 12.68%) hold Municipalities of Hügelsheim and Rheinmünster (each 4.88%) and the cities of Bühl (4.15%) and Rheinau (1.22%) are involved. The nearby city of Rastatt decided against participating in the tenure of Mayor Klaus-Eckhard Walker .

  In 2019, a new record of over 1.3 million passengers was achieved. In 2020, air traffic was severely restricted due to COVID-19 until the end of May, but the Hungarian airline Wizz Air announced four new connections in June . The destinations are Larnaka , Tirana , Bucharest and Varna .

Since 2008, the airport has referred to itself as an “international airport” (IVF). This refers to a classification by the Working Group of German Commercial Airports , on whose board of directors the airport is now represented. The name has no legal effect. The authorities continue to classify FKB as a regional airport. This means that the air traffic controllers do not have to be provided by the German Air Traffic Control (DFS), which is a legal requirement for official IVF.

Terminal of the airport Karlsruhe / Baden-Baden 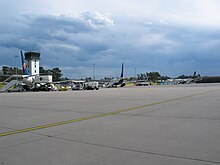 Karlsruhe / Baden-Baden Airport has a 3000 m long and 45 m wide runway. In the main landing direction 21 ILS approaches of category CAT III b are possible.

The handling capacity in the airport building, which opened in 2005, is 1.5 million passengers per year, the handling building can be expanded on both sides as required. Passengers are handled in a terminal that has 20 check-in counters and eight gates . Three gates are intended for flights outside the Schengen area , four gates for flights within the Schengen area. A gate can be used either for Schengen or non-Schengen flights. Arriving passengers will find their luggage on three luggage belts. There are counters for rental car companies and travel agencies in the terminal. There is a small bistro on both the land and the air side. In the air side area you have access to a beer garden and a children's playground. An observation deck was built adjacent to the northern end of the terminal, allowing visitors to observe the activities on the apron .

The Center for private pilots ( Private Aviation Center ) with flight schools, restaurant and parking spaces for small aircraft is separated from the terminal in the southern region of Baden Airpark, the sector E .

The airport is on Landesstrasse 75 (formerly Bundesstrasse 36 ) Rastatt – Kehl. The federal motorway 5 runs four kilometers to the east, the Baden-Baden exit of which can be reached via the L75 and federal road 500 . The center of Hügelsheim is passed through. The Autoroute A 35 can be reached on the French side of the Rhine via the Iffezheim barrage .

The  airport is served by the Baden-Baden train station with bus line 285 (city bus) operated by the Baden-Baden public transport company , which is part of the Karlsruhe transport association . From Rastatt Train Station to the airport, the regional bus line run 234, and since the start of the summer timetable 2018 every hour the Research Organization state funds Regio express bus -line X34.

The district of Rastatt is planning to connect Baden Airpark from the east to Autobahn 5 via a new junction near Halberstung , south of the Baden-Baden junction. For this purpose, the state road 80 would be expanded and the district road 3761 led north past Schiftung. A corresponding district council resolution was passed on July 22, 2014. Due to nature conservation concerns, an exemption would be necessary and the planning is controversial.

Considerations of connecting the airport to the Karlsruhe light rail network via Baden-Baden or Rastatt have not yet been implemented. According to a standardized assessment and follow-up cost calculation from 2011, there was no prospect of state funding and the project was postponed due to the financial framework.

On March 25, 2020, flight operations for passenger aircraft were severely restricted for an indefinite period due to the COVID-19 pandemic .

On June 2, 2020, the first scheduled flight took place again, which was operated by Wizz Air.