The North American F-86 Saber was a single beam fighter aircraft of the US manufacturer's North American Aviation . The low-wing aircraft was in service in the early days of the Cold War .

As early as 1944, two prototypes of the NA-134 were commissioned, which can be considered the forerunners of the NA-140. On May 18, 1945, the USAAF ordered three NA-140s under the designation XP-86. In August 1945, after evaluating German development documents, it was decided to radically change the design and equip it with swept wings . The main focus was on the wind tunnel tests that had been carried out at Messerschmitt with the 35 ° swept wing of the Me-262-HG-II project . The Me 262 was also the model for the automatic slats used to remedy the tip stall problem (covering the wing tips). However, a four-part variant was used, while the Me 262 only used a two-part slat. While the first drafts of the NA-140 still provided for a NACA laminar profile , the symmetrical high-speed profile of the Me 262 HG II was later chosen. This had a thickness ratio of 9.8 percent at the root (profile 0009.8) and at the wing tip of 9 percent. After experience in Korea, the profile was revised again and changed to NACA 0009-64 and NACA 0008.1-64. The prototype flew on October 1, 1947. On April 25, 1948, the model broke the sound barrier on an incline flight . In the same year, due to a change in the US designation system , the P-86 became the F-86 . The F-86 entered service in 1949. A version with unswept wings was developed for the United States Navy as the FJ-1 Fury .

The North American F-86E (responsible chief engineer Fred Prill) was the only fighter in the western world that could take on the Soviet MiG-15 in the Korean War - the performance data were a little worse, but the flight characteristics were better. In the Korean War, the F-86 was used as an air superiority fighter to protect the outdated fighter types such as the Lockheed F-80 , the Republic F-84 and the Gloster Meteor , which were used as fighter-bombers over the battlefield, from MiG attacks. In contrast, the North Korean-Chinese troops received no air support, as they no longer had suitable aircraft at that time. On December 17, 1950, the US pilot Bruce H. Hinton shot down a North Korean MiG-15 for the first time with his F-86. The most successful US fighter pilots with an F-86 were James Jabara with 15 and George A. Davis Jr. with 11 MiG kills in 1951.

In the aftermath of the Korean War, the F-86 became NATO's standard fighter . Although the type was originally designed as a day fighter , North American also developed a radar- equipped all-weather fighter based on the F-86 . Temporarily, the British Royal Air Force Saber flew the Canadian production line. The first British Saber season was from May 1953 the No. 67 Squadron . In the mid-1950s, ten Saber squadrons flew in the area of RAF Germany . The Federal Air Force also used the F-86 as a day fighter, fighter-bomber and all-weather fighter.

The F-86 was used by the German Air Force and various NATO air forces such as the USAFE in the Federal Republic . The Air Force had Saber Mk. 5 and Mk. 6 from the Canadian manufacturer Canadair , which were used as day fighters, and F-86K, which served as all-weather fighters. Outwardly, these aircraft differed mainly in that the K version - like the F-86D version from which it was developed - was equipped with the AN / APG-36 radar, which was located above the air inlet. In addition, built by North American and received Fiat in Turin reassembled a new aircraft, "F-40 wing" called, wing . The missile armament planned for the D and L version consisting of 24 “Mighty Mouse” FFAR missiles was replaced by four M-24-A1 cannons of 20 mm caliber .

The 88 machines planned for Germany as part of the Mutual Defense Aid Program were manufactured in 1955 and 1956, shipped in individual parts to Italy, after assembly, flown to Oberpfaffenhofen between 1957 and 1958 and initially stored there. These aircraft were not activated again until 1959 and between August 1959 and August 1960 the 3rd squadron of the Luftwaffe 10 weapons school received the machines and equipped them with armament in Oldenburg. As early as September 1960, Jagdgeschwader 75 was the first all-weather squadron to move all WaSLw F-86K to Leipheim, at which time Neuburg on the Danube was already established as the final location. After the construction work there was completed in the spring of 1961, the squadron moved there, and in May 1961, Jagdgeschwader 75 became Jagdgeschwader 74.

After the stormy early days, which was characterized by the many relocations and restructuring within the association, the 10,000. Flight hour and two years later the 20,000. Flight hour to be celebrated. At this time the first units of the Luftwaffe were already equipped with the starfighter , which was to gradually be used in all units; On May 12, 1964, the first Starfighter intended for the JG 74 landed in Neuburg. During the conversion of the squadron, the Saber Dogs were brought together in a third season in order to continue to carry out the NATO mission. On January 5, 1966, the last flight of an F-86K of JG 74 was carried out. Six aircraft were lost during operation, the remaining aircraft were flown to Oberpfaffenhofen and 59 of them were sold to Venezuela, where they were flown for a few years.

Loss of the Federal Air Force

The Bundeswehr had to complain about the loss of six F-86Ks, which were destroyed or damaged so badly that they had to be written off.

F-86E in the Museum of the Greek Air Force 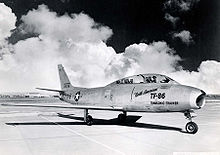 XF-86
Prototype (NA-140) with General Electric J35 engine, two built.
XF-86A
first prototype with General Electric J47 engine
F-86A
first production model. Originally the aircraft was equipped with a General Electric J47-GE1 jet engine with a thrust of 2200 kp. Later copies received J-47-GE-3, -7, -9 or -13 jet engines with 2359 kp thrust, 554 built.
DF-86A
Conversion of some F-86A to drone control aircraft.
RF-86A
Equipping eleven F-86A with three cameras as reconnaissance aircraft.
F-86B
Version with a wider fuselage and larger tires. An order for 188 machines was canceled.
F-86C
Original designation of the YF-93A (NA-157) with air inlets on the sides of the fuselage, two built, first flight on January 25, 1950.
YF-86D
originally referred to as YF-95A . For political reasons, the name was changed to YF-86D on July 25, 1950. Two prototypes of an all-weather fighter with AN / APG-37 radar in the aircraft nose, longer and wider fuselage and J47-GE-17 engine with afterburner . The armament consisted of 24 unguided rockets of the type " Mighty Mouse ". This advancement had only 25 percent common components with other F-86 versions. Test pilot George Welch carried out the maiden flight on December 22, 1949.
F-86D
Production version of the YF-86D, 2504 copies were built. The last two of the above-mentioned speed records were flown with this version.
F-86E
F-86A equipped with pendulum rudders . 456 aircraft were built, 60 of them F-86E for the USAF at Canadair in Montreal .
F-86E (M)
Name for former F-86s of the Royal Air Force that were sold to other NATO countries.
QF-86E
Canadair Saber Mk. 5 converted into target display drones .
F-86F
F-86E with improved wings, built in 1959. In Japan, under the direction of Mitsubishi 300 F-86F were built by several manufacturers . The sub-variant F-86F-35 could carry a 1200 lb tactical nuclear free-fall bomb Mk. 12 on the left inner outer load carrier. Of the F-86F-35, 264 copies were produced, which were used by the USAF from January 1954 almost exclusively in Europe. The LABS (Low Altitude Bombing System) computer was used for the special technique of dropping the nuclear weapon by pulling it up after a previous low altitude flight.
RF-86F
Conversion of some F-86Fs to reconnaissance aircraft and 18 Mitsubishi F-86Fs.
TF-86F
Two copies of the F-86F were converted to the TF-86 . As a training aircraft with double controls, they received an additional cockpit .
F-86G
F-86D with a more powerful engine, designation was not used.
YF-86H
Prototype of a fighter-bomber with a widened fuselage and General Electric J73 engine. The tail unit was enlarged and the landing gear reinforced.
F-86H
Production version of the YF-86H, which, like the F-86F-35, was equipped with the "Low Altitude Bombing System" (LABS), which allowed a Mk.-12 nuclear weapon to be dropped. From the 116th machine onwards, it was armed with four 20 mm cannons. The first production machine was delivered to the 312th Fighter Bomber Wing in Clovis AFB in New Mexico in the fall of 1954 . As early as June 1958, the USAF had given all F-86Hs to the Air National Guard . 477 pieces were built.
QF-86H
Conversion of 29 F-86Hs into target drones for the US Navy.
F-86J
F-86A-5-NA (49-1069) with Orenda engine.
YF-86K
Conversion of two F-86D as a simplified export version with an armament of four 20-mm cannons and two AIM-9B Sidewinder air-to-air missiles.
F-86K
Production version of the YF-86K, 120 built. Another 221 F-86K were built at Fiat using components supplied by North American. The Luftwaffe ordered a total of 88 units in 1957 and 1958, which were assigned to Fighter Squadrons 75 and 74 respectively.
F-86L
Conversion of the 827 F-86D with enlarged wingspan and new avionics . 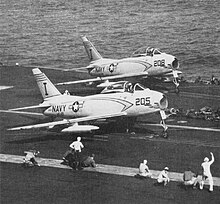 Canadair Saber Mk. 6 of JG 71 in the Air Force Museum in Berlin-Gatow

The Australian Commonwealth Aircraft Corporation converted the F-86E so that it could accommodate the Rolls-Royce-Avon engine . For this, 60 percent of the hull had to be changed. The armament consisted of two 30 mm Aden cannons and two AIM-9B.

The F-86 was mass-produced by North American at the Columbus, Ohio and Inglewood, California factories and by Canadair. 460 aircraft were manufactured under the Mutual Defense Aid Program (MDAP).

Acceptance of the F-86 by the USAF: