The North American F-100 Super Saber (also called Hun ) was a single-engine fighter aircraft made by the United States that was in service during the Cold War . Together with the MiG-19, it belonged to the first generation of supersonic fighter aircraft . The nickname Hun (Hundred) was derived from the designation F-100 ; she was popular with the pilots. It was also long-lived and in active service in Turkey and Denmark until the 1980s. F-100 to F-110 made up the Century range .

As soon as production of the F-86 Saber began in 1949, thought was given to a successor. The board of directors of North American Aviation decided to build a supersonic fighter. A modified F-86 was unsatisfactory, as tests with the F-86C and the variant F-93A had shown. That is why they started from scratch, only the basic concept as a low-wing aircraft with a central air intake remained. The wings were swept at 45 °. To avoid wing twisting problems, the ailerons came in. So that the landing speed would not become unacceptably high, slats were added over the entire length. The Pratt & Whitney J57-7 with afterburner was used as the engine . As armament were four mm 20 machine guns of the type Pontiac M39 installed, an evolution of the Mauser MG213 - automatic cannon . 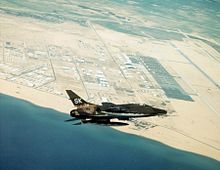 The first order for two pre-production copies YF-100A and 110 F-100A came on November 1, 1951 and thus before the first flight , which took place on May 25, 1953 by US test pilot George Welch at Edwards Air Force Base . On October 29, 1953, Pete Everest set a new world speed record with the YF-100A in Salton Sea with 1215.298 km / h. As early as November 1953, the first series machines were put into service a little early. In November 1954, all 70 machines produced by then were banned from flying after some aircraft broke apart in the air. The F-86 designer Ed Schmued had already announced his concerns. In his opinion, the F-100 had insufficient directional stability due to the long fuselage and short wings. The machine suddenly threatens to tumble in certain flight conditions. Ray Rice and the other decision-makers on the design team prevailed over Ed Schmued. The fuselage of the serial F-100A was even lengthened and the vertical stabilizer was drastically shortened in order to achieve the highest possible flight speed. This had a fatal effect on the directional stability, so the ball of the turning pointer was only in the middle when it passed it from the right or left. The chief test pilot George Welch was the first to have a fatal accident on October 12, 1954 with the F-100A. The second crash occurred a few weeks later and the third just a few days later. The shortened fin and the long fuselage led to a coupling of roll and yaw moments (turning-roll moment). This put the machine in an uncontrollable flight condition. This effect is known and feared today as the inertial coupling . As a solution, all aircraft already in production or on the production line had to be fitted with a 27% larger fin, while the wingspan was increased by 66 cm. This meant that delivery could only start again in early 1955.

The rapid technical progress soon made the machines obsolete. As early as 1958, the A versions went to the Air National Guard or were given to the Republic of China (Taiwan) . Due to the expected rapid aging of the vehicle , the German Air Force had refrained from purchasing the F-100D offered by the USA in 1957.

By replacing the fighter role, the F-100C was further developed as a fighter-bomber and received under-wing stations for dropping ammunition. This aircraft also had an in-flight refueling probe and was the first version to be able to be refueled in the air. On August 20, 1955, test pilot Horace A. Hanesder set the first absolute speed record of 1,323.09 km / h over the Mojave Desert according to the new rules for high altitudes with a C version , and at the same time it was the first recognized supersonic world record .

The most important version was the F-100D, it had completely new wings with a bent inner edge and a conventionally outwardly relocated aileron. The avionics were also upgraded with an autopilot and a bomb-dropping system with which atomic bombs could also be used in low-level flight.

The only variant that was still newly produced was the machine first called the TF-100C and later the F-100F. It was a two-seat trainer version, but it was fully combat-ready, even though only two 20 mm cannons were installed.

The "Hun" flew most of its missions in the Vietnam War , where it proved itself in many tasks. After it had been upgraded again with electronics and radio communication and navigation, it was used and used up as a bomber , fighter , scout , wild weasel and for advanced observation. From 1970 the Hun was replaced by the F-4 and F-111 and handed over to the Air National Guard . A total of 243 F-100s were lost in Vietnam, 198 of them in service.

Many decommissioned aircraft have been converted into unmanned, remotely guided drones (QF-100) that were used as targets in weapon tests. Others were used by NASA as test aircraft. About 50 remaining machines are exhibited in museums in Germany, France, England, Turkey, the USA and other countries.

In addition to the 243 operational losses in Vietnam, a total of 849 F-100s were lost through accidents up to September 30, 1976 through flight and 10 through ground accidents, ie more than a third of all aircraft built.

Explosive ordnance up to 3,402 kg at four external load stations