The Koninklijke Luchtmacht (German: Royal Air Force ) of the Netherlands , KLu for short , is one of the four Dutch armed forces . The air force is led by a lieutenant general, currently Dennis Luyt , and has a strength of about 7,500 people, of which 6,500 are soldiers.

The Royal Air Force is the youngest branch of the Dutch Armed Forces . Initially, the Netherlands only had air units of the army ( Luchtvaartafdeeling or LVA for short ), which were founded in July 1913 at the Soesterberg military airfield. In 1913 this part of the army only had one (borrowed) aircraft in use, the Brik , which was supplemented a few months later by three French Farman . During the First World War (1914-1918) mainly reconnaissance and navigation flights were carried out.

After the end of the war, defense spending was reduced again across Europe, which did not stop at the air forces of the Netherlands. During this time, between the years 1919 and 1940, the first aerobatic team, translated as "five fingers of one hand", was created. The equipment consisted of 56 Fokker CI machines and 20 single-seaters of the Fokker D.VII type , supplemented by a few Fokker C.5s. These machines formed the backbone of the Dutch air force until the German raid in 1940 .

During the Second World War (1939–1945), the aircraft equipment of the Dutch Air Force consisted of samples mainly of domestic production. The total of around 140 aircraft were stationed at five bases ( Amsterdam-Schiphol , De Kooy , 's-Gravenhage , Bergen and Rotterdam- Waalhaven) and were mainly subordinate to the Commando Luchtverdedeging ("Command Air Defense"). From 1939 the Dutch leadership had tried to equip its air forces with foreign aircraft types. Most of the aircraft ordered in the USA could not be delivered in time before the German invasion and were forwarded to Great Britain or the Dutch East Indies .

In the first days of the German attack , the Germans succeeded in destroying a large part of the machines stationed in the Netherlands (mainly on the ground), but not without accepting considerable losses themselves. In the Netherlands it was registered that a large number of German planes flew over the country, but it was assumed that in the First World War only the neutrality of the country would be violated here, in order to attack Great Britain in this case; Ultimately, however, this represented the attack on all the airfields on which the Dutch Air Force had deployed their planes. In particular the Fokker D.XXI and Fokker GI turned out to be serious opponents. When the Netherlands surrendered on May 15, only about 25% of their initial inventory was left, the Dutch Air Force itself was able to destroy 345 aircraft, 222 of them Junkers Ju 52 , which at that time made up about 75% of the transport fleet.

The Dutch East Indies colony had its own air forces, the Militaire Luchtvaart van het Koninklijk Nederlands-Indisch Leger ( ML-KNIL , "Military Aviation of the Royal Dutch-Indian Army "), which were numerically stronger than the air forces in the mother country. The aircraft used in the Dutch East Indies experienced significantly lower losses and continued the fight against Japan in the Pacific War . After the colony was overrun by the armed forces of Japan in March 1942, the remaining Dutch personnel in Australia continued to fight on the side of the Allies and were equipped with mainly American aircraft.

The following tables provide an overview of the equipment used by the Dutch Air Force in World War II:

Stationed in the motherland in spring 1940:

Stationed in the Dutch East Indies from 1940 until the Japanese conquest in the spring of 1942 :

Aircraft ordered but not delivered (includes orders for the armed forces in the Netherlands and the colonies):

After the occupation of the Netherlands, three Dutch squadrons were set up within the Royal Air Force , the 320th, 321st and 322nd squadrons, which were transferred to the Dutch Air Force after the war, the latter still a few after the war ended Time in Wunstorf , is still active today. 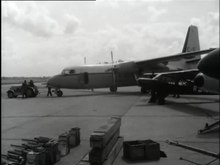 During the Cold War , the air force of the Netherlands was integrated into the NATO air defense system as part of the Second Allied Tactical Air Force (2ATAF). At that time, aircraft of the type Lockheed F-104 Starfighter were initially used as combat aircraft , in some squadrons also Northrop NF-5 . From 1979 the conversion to the General Dynamics F-16, which is still used today, began . In addition, several air defense units with the HAWK weapon system were set up, which was later modernized with the MIM-104 Patriot system.

After the end of the Cold War, the Dutch air force was modernized and military airfields that were no longer needed, such as in Ypenburg, were closed . The fleet of transport aircraft, previously designed for short-haul transports within the Netherlands and to other European countries and equipped with Fokker F-27s for this purpose , was upgraded by purchasing four Hercules transporters. The first crews were stationed in Melsbroek , Belgium, from 1994 to the end of 1995, in order to gain experience from the transport aircraft there. The transport aircraft are now under the control of the European Air Transport Command in Eindhoven.

It was used during Operation Allied Force , Operation Enduring Freedom and the NATO mission in Afghanistan. With its Solo Display Team , the Dutch Air Force has been maintaining an aerobatic team since 1979 , which aims to demonstrate the skills of pilots and the capabilities of the air forces with individual demonstrations of fighter aircraft.

The NATO Allied Force mission officially began on March 24, 1999 . Of the more than 37,000 missions flown during the Allied Force , Dutch aviators took on 1,194 (more than 7.5%). Shortly after the start of the operation, a Yugoslav MiG-29 was shot down by a Dutch F-16AM. In later phases, the Dutch Air Force was also involved in air strikes on targets on the ground.

In October 2002 a multinational squadron of 18 Dutch, Danish and Norwegian F-16s and a Dutch KDC-10 tanker were relocated to Manas Air Base in Kyrgyzstan . In February 2006 four Dutch and four Norwegian F-16s were combined in the 1st Netherlands-Norwegian European Participating Forces Expeditionary Air Wing (1 NLD / NOR EEAW) . In 2006 the Dutch Air Force took part in the NATO offensive in southern Afghanistan with six F-16s, six Eurocopter Cougars and six AH-64 attack helicopters . On August 31, 2006, a Dutch pilot died when his plane crashed in Helmand .

The headquarters of the air force, known as the Hoofdkwartier luchtmacht , is located in the city ​​of Breda in North Brabant . After the closure of the Twente and Soesterberg air bases in 2007/2008, the Netherlands currently has five major military airfields :

A smaller place houses the navy on- board helicopters , which, together with the air force, are under a joint command:

The armed forces use the Vliehors firing range on the island of Vlieland as an indirect base . This is the only area of ​​the Dutch armed forces on which combat aircraft can be trained to attack ground targets. The training takes place in the USA. The 302 Squadron, equipped with AH-64 and a few CH-47s, is stationed in Fort Hood , Texas , and the 148th Fighter Squadron , nominally part of the Arizona Air National Guard in Tucson , trains on the F-16. Transport pilots are also trained in the United States.

The rank badges of the Dutch Air Force are adapted to the NATO system and their designation roughly corresponds to the German rank badges. The English name is only used here for the rank of the Commodore , while the German name, which was adopted from the American, is Brigadier General .

The highest rank a soldier can achieve in the air force is that of the Luitenant-Generaal in the position of Commandant Luchtstrijdkrachten , comparable to the inspector of the air force in the Bundeswehr.

As part of the Strategic Airlift Capability Program, the Netherlands and the other participating countries also operate three C-17 Globemaster IIIs that can be used for strategic military air transport.

After Malaysia Airlines Flight 17 was shot down , the government announced in September 2014 that it would order three more CH-47F Chinooks and reactivate some decommissioned AS-532U2 Cougars.

Armed Forces of the Kingdom of the Netherlands

Military airfields in the Kingdom of the Netherlands