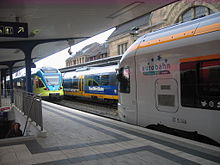 Regional trains of the NordWestBahn , Eurobahn and Westfalenbahn in Bielefeld main station

As a non-federal railways (NE when redundant acronym often NE railways) are in Germany all railway traffic and -infrastrukturunternehmen designated, that are not majority-owned by the federal government. This is also often used to describe all railway lines that are not owned by the federal government. The determination of whether “it is not a question of federal railways” must be made by the Federal Railway Authority in each individual case .

The NE railways are companies that are held by private investors or the public sector (states, districts, cities, etc.). However, there are also railways that exist as a municipality's own operations under public law. The number, scope and importance of the NE railways has increased considerably since the rail reform of the 1990s. The list of German railway companies gives a good overview of the current status.

The classification as a non-federally owned railway primarily has legal consequences. For federal railways (EdB), the Federal Railway Authority is responsible as the supervisory authority, for non-federally owned railways it is usually the respective federal state (although many federal states have delegated their tasks - at least in part - to the Federal Railway Authority).

In the case of railway companies, a general distinction must be made between:

RUs conclude contracts with the EIU about train paths and run the corresponding trains . A transfer of subsidies between the two areas is not permitted. If a company is an EIU and an EVU at the same time, a separate economic account must be carried out for both company areas under EU law . 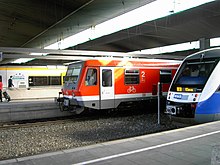 Düsseldorf Hbf : trains of the Eurobahn and the NordWestBahn next to a railcar of the state-owned DB

Most of the NE railways are publicly involved in so-called local rail passenger transport (also SPNV) and are subsidized by the public sector. In the context of public tenders , the RUs can apply to take over local passenger transport on a certain route for a period defined in the tender. Since the rail reform in 1994, the share of NE railways in local rail transport has risen continuously. In the first half of 2019, their market share in terms of operating performance (measured in train kilometers) in Germany was 33.1% (compared with 9.9% in 2003).

There are no public subsidies in long-distance passenger rail transport and RUs operate their own long-distance passenger transport. The companies are free to set prices here and are in independent competition with Deutsche Bahn . So far, however, private operators have hardly been able to establish themselves on the long-distance transport market despite the opening of the market to competition; their market share of the transport performance (in pkm) in long-distance passenger transport in 2012 was less than 2%. There are only individual commercial trains operated by private providers ; However, the tariff is often below the fare of Deutsche Bahn with BahnCard  50. The only competitors currently offering lines that run exclusively in Germany are Flixtrain and the night trains of the Austrian Federal Railways (ÖBB Nightjet).

The Mofair eV interest group was founded on September 9, 2005 in Berlin; Members are the most important private, independent and competitive transport companies active in the local public transport sector in Germany.

There is also the European Railways Network ; Since it was founded in autumn 2000, it has represented the interests of companies involved in rail freight transport.