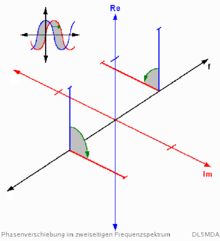 is a factor that indicates how much the phase of the transmitted signal should change depending on the useful signal, and is a type of phase modulation index . The expression describes the time derivative of the useful signal to be transmitted. The modulated transmission signal results in:

The second summand can be visualized as follows: the instantaneous values at certain points in time of the useful signal virtually adjust the phase angle of the cosine function, from which the name of this type of modulation is derived.

The analog phase modulation was only widely used in one area: NTSC and PAL color television signals transmit the color tone in a phase-modulated manner .

The fact that this method is otherwise rarely used is primarily due to a fundamental difficulty which, at least before the introduction of integrated circuits, could only be overcome with significant effort: The receiver must have a phase-synchronous "copy" of the unmodulated transmission frequency ; by comparing this reference signal with the received signal, it determines the phase shift. (The television standards mentioned above solve this problem by transmitting a few oscillations in each line of the picture (" color burst "), to which an oscillator in the receiver is synchronized.)

Phase modulation therefore only became essential for practical application with digital transmission methods , where synchronization and demodulation can be solved using a Costas loop .

The phase shift keying ( English phase shift keying abbreviated PSK ) represents the digital form of the phase modulation. The sinusoidal carrier oscillation is switched over in discrete phase steps by the digital data stream to be transmitted. The designations for digital modulations come from their properties at the sampling times on the receiver side. Keying means (toggle) keys, derived from "Key" which is also the name for the Morse key.

Fig. 4: BPSK with soft keying, in the middle the switching time range