As pure mood a musical will sound system referred to, wherein in the diatonic scales the tone levels octave , fifth , fourth and major third frequency ratios of exactly 2: 4 have the tonic: 1, 3: 2, 4: 3 and 5 respectively.

This requires subtle deviations from today's common mood . Many musical instruments and singers can realize these deviations; the better this succeeds, the more perfect the harmony is felt. This is based on the fact that in natural sounds, in addition to the fundamental tone, overtones, whose frequency is an integral multiple of the frequency of the fundamental tone, also resonate. If these partially coincide in the case of chords, the sound is perceived as harmonic; if the chords are out of tune the sound becomes rough.

In the Pythagorean tuning of the Middle Ages, only the octaves, fifths and fourths were in tune .

Regardless of the mood, the word pure in the intervals prime, fourth, fifth and octave is also used simply as the opposite of diminished or excessive .

Pure tuning arose in Western Europe with the advent of polyphony in the second half of the 15th century. Its use was first mentioned by Walter Odington , who mentions the major third as a consonant. The ars subtilior integrated the major third into a newly emerging triad conception until Bartolomé Ramos de Pareja expanded this way of thinking theoretically for the monochord in a musical treatise from 1482. Through Lodovico Foglianos' work "Musica Theorica" ​​from 1529 the pure tuning became better known.

In polyphonic music, the ideal of pure tuning is widespread in vocal ensembles, choirs and ensembles with wind and string instruments. Listening to each other enables pure chords to sound. In choir schools, for example, the correct intonation is explained using the theory of pure tuning.

A special feature of making music in pure tuning is that with modulations , not only tones change by changing the sign, but also a further tone by a syntonic comma . For example, compared to C major, G major requires the tone F sharp instead of the tone F and also the tone A higher by a syntonic comma (see modulations in pure tuning ). That is why a tuning for several keys can only be achieved with keyboard instruments if there are more than 12 keys per octave, as is the case with the Archicembalo . Such instruments are practically unplayable and could not gain acceptance. On keyboard instruments with 12 fixed pitches per octave, if several or even all scales of the circle of fifths are to be usable, a deviation from the ideal of pure tuning, tempering is necessary. Losses in the melodious sound of chords have to be accepted (see also pure tuning for keyboard instruments ).

The mid-tone tuning in the 16th to 18th centuries contains purely tuned major thirds. This is achieved by making fifths more closely tuned.

The mean-tone tunings have the limitation that not all keys can be played. Only the well-tempered tunings and the equally tempered tuning allow playing in all keys, but move away from the ideal of pure tuning by sharpening the pure third. (The fifths are improved compared to the mid-tone tuning.)

Not only in the Western musical tradition, but also in non-European musical cultures, one often encounters harmoniously pure intonations . In individual cases, other intervals of the overtone series are also included, such as the natural seventh (7th partial ) or the Alphorn Fa (11th partial).

Purely tuned keys play a decisive role in the performance practice of the music of the Renaissance and Baroque periods by a cappella choirs, string quartets or orchestras. With pure intonation, a clear basic tone feel (because of the difference tones ) and a beat-free sound (because of common overtones ) is achieved. This of course also applies to the music of the Classical and Romantic periods and is ideally aimed at in their brass sections. At the same time, however, the intonation becomes more complicated due to the expansion of chordal possibilities away from the simple triads to an extreme chromatization of the movement, for example in Richard Wagner's .

Since only one key can be played on keyboards with 12 keys, the spacing of the circle of fifths has been slightly changed. With the mid-tone tuning so that the thirds sounded in pure form. Many keys - though not all - could be played that way. In the case of equal tuning, so that the octave is divided into 12 equal semitones. Here the thirds sound rough.

Octave, fifth and major third form the basic intervals of the pure tuning. All further intervals can be put together from these basic intervals. This is why this system is also called the fifth-third system .

Frequency ratios of the major and minor scales in pure tuning

Pure scales are based on the following frequency relationships:

The chords of the tonic CEG or C-Es-G, the subdominant FAc or F-As-c and the dominant GHd or GBd (in minor) consist of perfect fifths and thirds. The fifth DA, however, is impure. A chord on the second level therefore already means an (intermediate) modulation towards the subdominant . In the scales in just intonation is to be noted that there are two types of whole tones, for example, C to D with the frequency ratio 9 / 8 and D to E to the frequency ratio 10 / 9 .

As a result, these scales deviate unmistakably from the scale in equal tuning, in which every semitone makes up exactly one twelfth of the octave and a whole tone corresponds to exactly two semitones.

The additive notation of the major and minor scales

Main article: The division of the octave into 53 pitches

At the time of Zarlino (1517–1590) it was taught in music schools that parts can be assigned to intervals:

If you note the distance of the scale from c (in brackets) or from the adjacent tone (set lower) in this division, you get:

The chromatic semitone (from es to e, as to a and b to h) results in 3 parts.

The deviations of the approximate values ​​here from the exact values ​​are smaller than a schism (2 cents) and thus at the limit of the perceptible tone difference.

Basically, the characteristic pure third with the frequency ratio 5 / 4 . The mid-tone tuning with its many pure thirds almost completely realized the pure tuning for keyboard instruments - but only for a limited number of keys.

The pure major third was first mentioned around 1300 by Walter Odington in his De Speculatione Musices . Earlier descriptions of this interval are related to the ancient Greek tone system .

Note: Pure intervals are characterized by integer frequency ratios, while tempered intervals usually have an irrational frequency ratio. Therefore the size comparison is made with the unit cent .

The pure tuning of the C major scale with the D of the dominant chord GHD and the A of the subdominant chord FAC results in a fifth DA , which is a syntonic comma too narrow and thus appears dissonant .

The second level chord is an intermediate modulation towards the subdominant . The D of A minor (or F major) results in a pure minor chord DFA . In the following cadence, the D in the second degree Sp chord is a syntonic comma lower than in the D chord of the dominant. 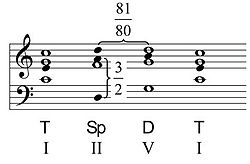 If this is not observed, the mood of a choir can drop. (see "Comma trap".)

However, the second degree chord can also be interpreted as a double dominant - often discussed less often in the literature - as D-F sharp-A. In this case - modulation towards the dominant - the A is increased by a syntonic comma.

The interval space of the pure tuning is the fifth-third system .

All intervals can be represented as multiples of the three basic intervals Ok (octave), Q (fifth) and T (major third).

With modulations, tones change not only by a semitone, but also some tones by a syntonic comma (see modulation for pure tuning ). This cannot be achieved on a keyboard with twelve notes per octave. One was forced to use tempered moods. First:

Modulations require the pitch to be adjusted

Rule of thumb: When modulating into a neighboring key, two tones change, one of which is recognizable with a change in sign, the other slightly by a syntonic comma . (Frequency ratio 81 / 80 21.5 cents. This is about 1 / 5 semitone.)

Comparison of the expanded pure tuning with the equal tuning

If you add the F sharp of G major and the D flat of F minor to the notes of the C major and minor scales, you get the 12-step chromatic scale of pure tuning.

Chromatic scale of the pure tuning of C major and C minor supplemented by F sharp and D flat:

In this tuning you can only play C major and C minor as well as A major and E minor (with the minor dominant HD-F sharp). (If the D flat in the major dominant chord B-D flat-F sharp is replaced by its enharmonic mix-up of E minor, the result is an E flat that is 41 cents too high.) In order to be able to play in all keys, in the case of the equal Tuning the semitones adjusted. It is accepted as a compromise that there is no longer a pure triad.

The equal tuning can also be obtained by distributing the Pythagorean comma in the circle of fifths FCGDAEH-Fis-Cis-Gis-Dis-Ais-Eis-His = (C?) Over the twelve fifths. The perfect fifth (702 cents) differs only slightly from the equivalent (700 cents). The major third (386 cents) is "sharpened" by 14 cents in the equal tuning (400 cents).

Frequency ratios of the expanded scale

→ Main article : detailed table of the intervals of pure tuning

If you add the F sharp of G major (dominant) and the D flat of F minor (subdominant) to the C major and C minor scales , you get twelve levels.

Here the B is chosen as a pure minor third to G (belonging to C minor). In some representations (emphasizing fifths) the B is chosen as a fourth to F (given in brackets) with the advantage that the interval AB is a diatonic semitone. But then this B already belongs to F major.

As you can see, an instrument tuned in this tuning can only be used for C major and C minor (with a suitable B flat) as well as A flat major and E minor and is practically not realized.

The two most important intervals in triad formation are the fifth and the third. Since the purely tuned third does not appear in the circle of fifths, Euler developed a precise notation that enables a precise definition of the pitch that is hidden in the musical notation.

This notation was used by various music theorists such as Moritz Hauptmann , Hermann von Helmholtz and Arthur v. Oettingen used and led to new musical instruments such as the pure harmonium .

You can see immediately that with modulations, individual tones change by a syntonic comma. For example at the transition

The corresponding frequency values ​​are calculated with c = 264 Hz as follows:

For the tonal representation of pure moods, a well-known, although historically incorrect example was chosen, which makes it possible to clearly hear the difficult differences. It was designed by Johann Sebastian Bach for one of the (many) well-tempered tunings ; Exactly for which one can no longer be reconstructed with certainty today.

Johann Sebastian Bach: Prelude in C major from the first volume of the Well-Tempered Clavier , BWV 846