Detail of the dystopian painting Shores of Oblivion by Eugen Bracht , 1889

Figure in a live role play with a dystopian scenario 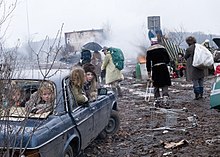 A dystopia , also anti-utopia , seldom also called cakotopia or mätopia , is a counter-image to positive utopia , eutopia, and in literary studies a fictional narrative with a negative outcome and set in the future.

She creates a future-pessimistic scenario of a society that is developing into a negative, and thus represents an alternative to Thomas More 's Utopia . Often the authors of dystopian stories want to draw attention to dubious social developments of the present and their consequences with the help of a pessimistic image of the future to warn.

A utopia is, in the true sense of the word, the description of a "non-place", i. H. a place that doesn't exist in real life; it is a desired nowhere: the Greek prefix ου- ou- is negative like the German “un-” in the sense of “not-”. Philosophical and literary utopias are in fact executed but draft of a state or country whose society is well organized, which is why sometimes similar sounding Eutopie is called (in English even equal sounding) because the Greek prefix ευ- eu stands for "benign" or "well-". For this very purpose is δυσ- dysplastic counterpart. In this respect, the terms dystopia and utopia are not exactly opposite terms in the sense of e.g. B. Dysphoria and euphoria .

A dystopian society is usually characterized by a dictatorial form of rule or a form of repressive social control . Typical characteristics of a dystopia: The individual is deprived of all freedom by mechanized superstates, communication between people is restricted or otherwise disrupted, and awareness of their own history and / or values ​​is cut off.

The history of dystopias only begins in the age of the industrial revolution . There have always been opponents of science and technological progress, but this never resulted in a counter-utopia. Even those who believe in progress initially doubted the technological possibilities. It was only when their ideas of reality were caught up in a reason to attack technological advancement and its tendencies.

The first approaches can be found here at ETA Hoffmann ; the first dystopia in the strict sense is Mary Shelley's novel Verney, the last man .

The first use of the word is attributed to John Stuart Mill , whose good knowledge of Greek suggests that by dystopia he meant not only the opposite of Thomas More's Utopia , but rather a place where, in the broadest sense, it was bad about the Things are ordered.

Limit of optimism for progress in the industrial revolution

The destruction of the belief in progress gradually begins in the last third of the 19th century. This can be attributed to the following reasons:

Basic features of a dystopian society

A dystopian society will usually have at least one of the following features from this non-exhaustive list:

Many films and literary works about dystopian societies tend to have some of the following features:

To captivate the reader, dystopian fictions usually use familiarity as another means: it is not enough to portray life in a society that seems unpleasant. In the fictional dystopian society, elements from the here and now must echo that are familiar to the reader from his own horizon of experience. When the reader can identify the patterns or trends that could potentially lead our society today into fictional dystopia, preoccupation with fiction becomes a compelling and impactful experience. Writers can use dystopias effectively to express their own concerns about societal trends. George Orwell's novel 1984 is based on political developments in the year it was written in 1948, when an icy climate was already emerging in post-war Europe. Similarly, Ayn Rand wrote her story Anthem (German: Die Hymne des Menschen ) as a warning against the subordination of the individual to the state or "the we". In Sebastian Guhr's novel The Selfless , animal rights are placed above human rights. Margaret Atwood wrote The Maid's Report as a warning of the rise of religious fundamentalist totalitarianism in the United States and the hypocrisy of 1970s feminism that played into the hands of its opponents.

Dystopian fictions are often (but not always) unsolved, that is, the story is about individuals who are unsatisfied and may rebel, but ultimately fail in their efforts to change something. Not infrequently they end up complying with social norms. This narrative arc, leading to a feeling of hopelessness, is characteristic of classic dystopian works such as 1984 . They stand in stark contrast to fictions in which a hero successfully resolves conflicts or otherwise turns things for the better.

In a dystopian society there are mostly parts of the population that are not under the complete control of the state, and in which the hero of the story usually places his hopes, but in the end fails. In 1984 by George Orwell these are the “Proles” (the proletariat), in the dystopia We by Yevgeny Ivanovich Zamyatin it is the people outside the walls of the “One State”.

Criticism of the concept of dystopias

Just as most philosophers, political scientists, and writers have given up the idea of ​​a perfect society or " utopia, " many have also expressed skepticism about the likelihood of real dystopias as Orwell and others set out. Although there have been many states with absolutist claims to power in human history, writers like Gregg Easterbrook and others point out that such societies tend to self-destruct or are destroyed by neighboring societies. Dictatorships and similar regimes tend to be short-lived, as their policies and actions continually attract new potential opponents.

A critical view of dystopian social conditions is to see them as the threatening course of events. Accordingly, all social constructs (ideas like organizations) strive incessantly to achieve synergetic gains by restricting the degrees of freedom and nonconformities of individuals. To a moderate extent, this results in the blessings of culture and civilization for the individual; in excess, this leads to dystopia, namely when attempts are made to shut down the (more complex) biological substructure of the individual, which is just as essential to being human, through overregulation and forcibly administered drugs the social superstructure.

Already in the 19th century there were dystopian scenarios ( Edward Bulwer-Lytton : The Coming Sex ), but these remained marginal. In the 20th century, Samjatins Wir, the first “classical” dystopia, shows where the statistic utopian tradition can lead if it is based on the technical and scientific standards of the 20th century. Short stories by Philip K. Dick such as Kolonie , Autofab and The Minority Report (filmed as Minority Report ) are classics of dystopia. The Warhammer 40,000 universe, created by Games Workshop as a tabletop game, but continued in books and video games, shows the path of mankind in the 41st millennium: constantly oppressed, tyrannized by a bureaucracy on behalf of the so-called "God-Emperor" in the eternal war and defensive struggle against humanity hostile factions such as aliens and demon-like beings. The Canadian Margaret Atwood et al. Is considered a modern author of dystopia. a. with the novels Oryx and Crake and The Maid's Report.