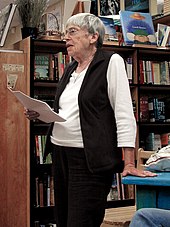 Ursula Kroeber Le Guin [ ˈɝsələ ˈkʁø: bɐ ləˈgwɪn ] (born October 21, 1929 in Berkeley , California as Ursula Kroeber ; † January 22, 2018 in Portland , Oregon ) was an American author of mainly fantastic literature , but also political utopias. She is best known for the science fiction novels of the Hainish cycle and the fantasy novels of the Earth Sea world.

Ursula Kroeber was the daughter of the writer and anthropologist Theodora Kroeber , author of Ishi in Two Worlds , the biography of the last survivor of the Yahi Indians, and the professor of anthropology Alfred Louis Kroeber . On the father's side, the family came from Kröbern in Thuringia . The ancestors of the mother, whose maiden name was Kracaw , immigrated in the early 19th century. While at school, the family lived near the University of California campus at Berkeley , where Kroeber attended Berkeley High School . In the summer months, however, they lived in Kishamish , a family property in the Napa Valley .

She started writing early. In one of her few autobiographical essays, she writes about the impression that Lord Dunsany's A Dreamer's Tale made on the child reader, how she wrote her first story at the age of eight of a man who is persecuted by malevolent elves, and how she was at the age of 11 Sent an initial time travel story to Amazing Stories , which was rejected. She read a lot, there was a house full of books and a good public library, but she didn't read science fiction for a long time - “I was busy with Tolstoy and things”, and there were always only the stories of the spaceship captains with angular Faces and strange weapons, it was the golden age of space operas - it wasn't until 1960 or 1961, at the suggestion of a friend, that a story by Cordwainer Smith convinced her that it could be done, that is, that there was science fiction of interest and that one could also write something like that.

But first came school and study. After high school, Kroeber went to the east coast and studied literature at Radcliffe College , Cambridge , where she received her bachelor's degree in 1951 and was awarded a membership in Phi Beta Kappa . She then continued her studies of the Italian and French Renaissance at Columbia University in New York , where she was a Faculty Fellow and graduated with a Masters in 1952 with a thesis on Pierre de Ronsard . She later used the background of the Mediterranean Renaissance world in her stories from Orsinia and Malafrena . Several Fulbright scholarships allowed her to do research in Paris (1953–1954) and London (1968–69 and 1975–76). In 1953 she met her future husband in France, the professor of history Charles A. Le Guin. In December 1953, Kroeber and Le Guin married. She and her husband had two daughters (born in 1957 and 1959) and a son (born in 1964).

Le Guin taught French in the following years at Mercer University in Macon , Georgia , and at the University of Idaho in Moscow . In 1955 she was Department Secretary (assistant department head) at Emory University in Atlanta . The family eventually settled on the west coast in Portland , Oregon in 1958 , where her husband taught at Portland State University and where Le Guin lived mainly until her death. In the summer months, however, they often spent time in the Napa Valley.

In September 1962, a first story appeared in April in Paris in the SF magazine Fantastic Stories of Imagination . Since then she has lived as a writer in Portland (Oregon). Her first novel, Rocannon's World , was published in 1966. The following years until 1974 were the most productive in terms of writing, in which most of the best-known works, especially the majority of the novels from the Hainish and Earth Sea cycles, appeared. Recognition soon followed, she won prizes, her books were enthusiastically discussed and her short stories found their way into important anthologies. 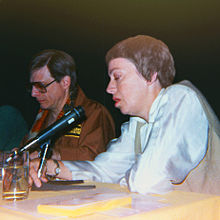 Le Guin once described her way of working as a kind of visionary process or visionary task:

"A person [is] seen, seen at a certain distance, usually in a landscape. The place is there, the person is there. I didn't invent him, I didn't make her up: he or she is there. And my business is to get there too. "

That is, the defining elements in Le Guin's work are the protagonists as part of and in relation to the world around them. Accordingly, her stories can be divided into four main groups, corresponding to the four fictional worlds of Le Guin, to which a large part of her works can be assigned. These are

Le Guin had little love for the divisions and delimitations associated with the genre terms of science fiction, as she formulated in her essay Genre: A Word Only the French Could Love . Above all, she objects to genre assignments if they are misused as a characteristic of literary quality:

“Any assessment of literature by genre is crap. Any classification of a literary form as inherently superior or inferior is junk. [...] There are a lot of bad books. There are no bad genres. "

Otherwise, she considers genre assignment to be quite useful in many cases, especially for the reader. But:

"I too have crossed some genre barriers, in fact about as many as I could."

“I also defied genre boundaries. In fact, over as many as I could. "

Nevertheless, she exemplified the genre distinctions in her four worlds almost like a textbook, for example according to Samuel R. Delany's definition, according to which a report describes what happened, a realistic novel something that could have happened, science fiction what not has happened (but could happen), and fantasy ultimately what could not happen - except when anything can happen.

The world of ecumenism (Hainish cycle)

The “ecumenism” (in the original Ekumen ) is a relatively loose association of inhabited worlds that were settled long ago by the humanoids of the world Hain . Terra , the earth, also belongs to these worlds , so the people are descendants of Hainian colonists. Contact was lost with the decline of the Hain civilization and was only restored when interstellar space travel became possible again. However, there is no faster-than-light drive, which is why travel and the exchange of messages initially take years, even if the time seems to be much shorter to the travelers themselves due to the time dilation . Only through the invention of the Ansible , an interstellar communicator that enables the exchange of messages without delay - the background of the invention is described in the novel The Dispossessed - a closer cooperation and exchange and thus ecumenism as a union of the inhabited worlds is only possible .

The stories from the Ekumen universe are therefore science fiction in the classic sense: If one accepts the prerequisites ( e.g. the possibility of instantaneous communication over interstellar distances or telepathy ), everything else follows the lines of the realistic novel.

Wizard and dragon of the earth sea

It is less clear with the world of the earth sea. There are magicians and dragons, two classic elements of fantasy. However, not everything can happen in every moment, rather the magic is subject to rules that - provided you have the appropriate talent - can be learned in the school of magicians on the island of Rok . Knowledge of the true names of things, which come from the true, original and unique language, is central to their study. This magical language is also the mother tongue of the dragons, which makes them magical creatures. The island kingdom of the Earth Sea is inhabited by different peoples, with different customs and traditions from island to island. There is rok as a cultural center and the annual long dance as a ritual practiced on almost all islands, but these cultural brackets are relatively loose. Furthermore, there is a history of the island kingdom that is not detailed, but is hinted at again and again, and there is a kingship which, however , was long extinct by the time The Magician of the Earth Sea began . The Magician of the Earth Sea is the first volume of the trilogy that is central to the Earth Sea Cycle, the other volumes are The Graves of Atuan and The Far Shore . The protagonist of these three novels is Ged called Sperber , and the novels portray the career Geds the goatherd on the mountain island Gont to Archmage of Earthsea.

So you have a consistent world whose basic requirements are completely different from those of the world we know. However, there are numerous human communities and cultures in which magic is considered to be an existing, active power. In Le Guin's Earth Sea, such a worldview is accompanied by the obvious, very tangible “functioning” of such magic.

A central theme of fantasy is the invasion of the completely unknown, the nameless, into the ordered, named world of high fantasy . This confrontation is the theme in The Magician of the Earth Sea , where Ged, as a student of magic, unintentionally conjures up a dark, nameless being who from then on pursues him and threatens to devour his entire existence, and also in the third novel The Far Shore , where magic threatens altogether is and threatens to extinguish, and thus the culture of the island kingdom is on the verge of collapse. The invasion of the unknown is literally the result of a border crossing, namely the border between the place of the living and the realm of irreversible, irrevocable death is broken. The breach that has arisen in this way causes the world of magic to bleed out and Ged succeeds in closing the gap again and restituting the world of magic only by mobilizing all his strength and with the help of the future king,

Always Coming Home and other stories from the west coast

She has received a number of awards for her books, including the two most important international prizes for science fiction literature, the Nebula Award and the Hugo Award . The Left Hand of Darkness and Planet of the Have-Nots each won both prizes, Tehanu and Powers the Nebula Award and The Word for World is Forest the Hugo Award. In 1974 Die Omelas got their backs on Hugo for the best short story. In 1985 she received the Janet Heidinger Kafka Prize from the University of Rochester . Between 1972 and 2009 she also won a total of four Locus Awards . In 1988 and 2002 she received the World Fantasy Award . For life's work she received the Gandalf Grand Master Award in 1979 , the World Fantasy Award in 1995, the Damon Knight Memorial Grand Master Award from the Science Fiction and Fantasy Writers of America in 2003, the Margaret A. Edwards Award from the American Library Association in 2004 and the Medal in 2014 for Distinguished Contribution to American Letter of the National Book Federation .

In 2001 she was inducted into the Science Fiction Hall of Fame . In 2017 she received the Hugo Award for the Best Related Work for Words Are My Matter: Writings About Life and Books, 2000-2016 and 2018 the same award posthumously for No Time to Spare: Thinking About What Matters . Also posthumously, she received the Locus Award in 2018 for the collection The Hainish Novels and Stories . In 2017 she was elected to the American Academy of Arts and Letters . 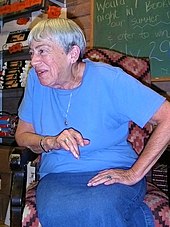 The Annals of the Western Shore