Fantastic , also fantastic , is a genre term that is defined very differently in professional circles. In a non-scientific sense, the term “fantastic” describes everything that is unbelievable, crazy, wonderful or great. The origin of the term “fantastic literature” is a translation error: ETA Hoffmann's Fantasiestücke in Callot's manner were translated into French in 1814 as Contes “fantastiques” instead of, more correctly, as Contes “de la fantaisie” .

In the film scholarly discourse, fantasy is a metagenre that encompasses the genres of science fiction , fantasy and horror .

Definitions of the fantastic

The many definitions of the fantastic proposed by literary scholars can be roughly divided into two categories according to Uwe Durst (* 1965).

The maximalist definition includes all narrative texts in whose fictional world the laws of nature are violated. The fundamental difference to the minimalist approach is that a doubt about the intra-fictional factuality of the supernatural does not play a role in the definition.

Durst further distinguishes between an ahistorical and a historical variant of maximalist genre definition. Ahistorically, all texts are assigned to the genre that violate natural laws from the point of view of today's natural science, including the Bible ( H. P. Lovecraft ), ancient epics, etc. ( Harald Fricke ). The historical variant, on the other hand, only describes those texts as fantastic that were created after the creation of the realistic literary convention (beginning of the 18th century) and in whose initially realistic world a supernatural event takes place ( Louis Vax , Roger Caillois ). Both maximalism variants can be differentiated into further subgroups. For example, Marianne Wünsch also includes texts in the fantastic literature in which the supernatural event is finally realistically explained away, something that other theorists reject.

The minimalist definition was first represented by the Bulgarian-French structuralist Tzvetan Todorov in a lengthy literary work. According to Todorov, the fantastic (as opposed to the wonderful , where the supernatural is beyond doubt) is determined by the indecision of the implied reader. The fictional factuality of the wonderful is in doubt. As soon as the text brings about a decision in favor of a realistic or wonderful classification of the event, it leaves the realm of the fantastic. In various texts, due to divergent information given in the text, the reader is not able to find out until the very end whether the described miraculous actually exists intratextually or is based on a deception of the hero, on a staging by fraudsters, drug consumption, insanity or the like.

Todorov's line of research was inter alia. continued by Christine Brooke-Rose (1923–2012) and Thomas Wörtche . Wörtche put Todorov's indecision criterion on a precise narrative-theoretical basis (macro- and microstructural destabilization of the narrative instance as the staging basis of the fantastic ambivalence). In recent times, the structuralist Uwe Durst in particular has emerged with a consequent minimalist theory formation. The scientifically based criterion of the supernatural is replaced by the literary convention-conditioned criterion of the miraculous, which stands in relation to the supernatural in a relationship of relative autonomy. Durst sees the advantage of minimalism primarily in the terminological specification, which also allows an exact description and terminology of texts that are excluded from the genre and assigned to neighboring categories in the course of the implementation of the minimalist concept of fantasy.

The image of the crack goes back to a much-quoted definition of fantasy by Roger Caillois . Accordingly, the “supernatural” reveals itself in the fantastic like a rift in the universal context. The miracle there becomes a forbidden aggression that has a threatening effect and breaks the security of the world in which until then the laws were held to be all-valid and immovable. It is the impossible that appears unexpectedly in a world from which the impossible has by definition been banned ”. The fear criterion additionally represented by Caillois (the fear that the real reader allegedly feels when reading a fantastic text determines the fantastic character of the text) was controversially discussed in the literary debate and is now scientifically outdated. Todorov, for example, scoffed: If you take Caillois' views seriously, "then you would have to deduce [...] that the genre of a work depends on the nerves of its reader."

The concept of the reality system was introduced into the fantasy discussion by Uwe Durst in 2001 and describes the organization of the laws that apply within a fictional world. This is primarily intended to create a distinction from the extra-literary concept of reality and to emphasize the inherent legality of the literary laws of reality. According to Durst, the regular reality system (R) is the system that hides its procedural nature (and thus its immanent wonder ) in order to give itself the appearance of identity with extra-literary reality. In realistic texts, for example, the procedural wonder of an omniscient narrator or the pan-deterministic causality of symbolic orders are concealed in accordance with convention. The wonderful reality system (W), on the other hand, allows wonderful events (clairvoyance, invisibility, immortality, vampirism, etc.) to appear openly. This wondrousness is either intratextually (in the text itself, i.e. by the narrator or acting characters) or intertextually marked (the wondrousness is evident from the reality systemic difference to realistic texts). In Durst's model, the fantastic is located between the area of ​​the R and that of the W: the formulation of a coherent reality system is impossible here. The fantastic is thus a non-system (N), which results from the mutual negation of the systems R and W.

The concept of the system jump also goes back to the work of Uwe Durst. It describes the change of the reality system within a literary text and thus its jump from one side of the spectrum to the other. Durst calls such texts mobile , texts without a system jump immobile . He cites Lewis Carroll's story Alice in Wonderland as an example . The text changes from a regular (Alice and Cecilia at a picnic) to a wonderful one (Alice follows the white rabbit into Wonderland) and back to a regular reality system (Alice wakes up from her dream). For terminology, Durst developed a formulas in which he contrasted the finally established reality system with the syntagmatic sequence of reality system states within the text (in the example mentioned: R = R + W + R). The concept of the system jump opens up, among other things. Questions about the genre-correct classification of system-jumping texts that ultimately establish a regular reality system.

Hans Dieter Zimmermann has developed an approach for a theory of the miraculous, which he traces back to sequential gaps: A necessary element is missing in a line of action, but the action still takes place, which generates the wonderful (stepping through a wall without first closing a door create). Zimmermann's approach has been expanded by Durst. Since 2007 he has differentiated three types of sequential gaps: syntagmatic-subtractive (as in Zimmermann; an indispensable element is missing in an action), syntagmatic-additive (two actions are declared as a single action unit, pan-determinism: sawing a jewelry ring kills its owner ) and paradigmatic (a whole action has been deleted from the paradigm of possible actions and thus become impossible, e.g. waging a war in a utopian world). Especially since there are sequential gaps in realistic texts, which are almost a condition of narration, the theory of sequential gaps is a central component in Durst's thesis that the fantastic literature pursues an exposure of the intrinsic wonder of the narrative and thus not the vampire, but the impossibility of narration itself is the real theme of the fantastic.

Fantasy according to a minimalist definition

In order to make the reader indecisive, procedures are used in the text that destabilize the narrator (shatter the authority of the narrator as the guarantor of the narrated world). Wörtche differentiates between macro- and microstructural destablization processes. The former exist when several narrators (possibly characters) contradict each other, suspect a lie or insanity (as in Theodor Storm's Der Schimmelreiter ). A microstructural procedure is given when the statements of an individual narrator in his own speech are questioned, e.g. B. by modalization ("it seemed to me") or grammatical disruption (as in Hanns Heinz Ewers ' Die Spinne ). Someone who is not in complete control of their own language may also have lost control of their mind. In this context, assurances not to be mad should also be mentioned (as in Edgar Allan Poe's The Treasonous Heart ). 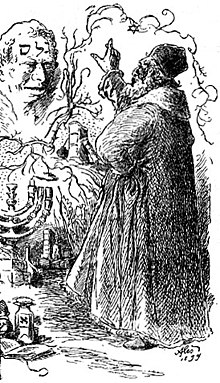 Rabbi Löw and the Golem , illustration by Mikoláš Aleš 1899

Under the programmatic title Yes, my dear, we are conservative , borrowed from Alfred Kubin , the German scholar Peter Cersowsky refers to diverse references and parallels between fantastic literature and politically conservative or right-wing positions, such as fundamental political distancing and belief in fate. As an early example he mentions Edmund Burke , the founder of conservatism , who with his aesthetic considerations played a central role in the gothic novel and horror story of the 18th and 19th centuries; Cersowsky also names the 1904 publication and translation of Edgar Allan Poe's works in Germany by Arthur Moeller van den Bruck (a central representative of the Conservative Revolution ) as the prelude to a previously unseen abundance of fantastic literature in Germany. A multitude of technical utopias running in parallel, from robots to the Atlantropa project to Hermann Oberth's space travel books , are closely linked to the technically oriented fantasy and early science fiction .

In this respect, Cersowsky sees a continuity beyond the 1920s; because (humorously) “when the revolution failed to materialize, the 68ers put their Lukács aside and passed the time with Lovecraft.” Nevertheless, Cersowsky does not come to the conclusion that fantasy is necessarily reactionary.

Not so Lars Gustafsson , who sees the fantastic in the example of Lovecraft as fundamentally reactionary - and weddings of the fantastic (and esoteric) combined with social regression; Lothar Baier and Peter Cersowsky contradict this thesis and, in contrast, name the element of crossing borders, rifts and utopia as potentially emancipatory and as a vehicle of social and technical innovation.

Portal: Fantastic  - overview of Wikipedia content on the subject of Fantastik