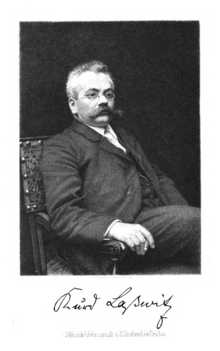 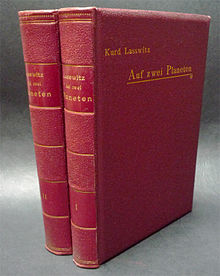 Kurd Laßwitz (born April 20, 1848 in Breslau ; † October 17, 1910 in Gotha ; actually Carl Theodor Victor Kurd Laßwitz ) was a German writer . He also published under the pseudonym L. Velatus and is considered the founder of German-language science fiction . His novel On Two Planets from 1897 is one of the most important German science fiction novels and has been translated into numerous languages.

Kurd Laßwitz - son of the entrepreneur and politician Karl Wilhelm Laßwitz - studied mathematics and physics at the universities in Breslau and Berlin . During his studies in 1866 he became a member of the Arminia fraternity in Breslau . He also became a member of the Breslau Mathematical Society. In 1873 the doctorate "magna cum laude" followed with a thesis "on drops that hang on solid bodies and are subject to gravity". For the public disputation of his dissertation, Laßwitz submitted the thesis: "Science can and should be popularized." In the following year, he passed the state examination for higher education in the subjects of mathematics, physics, philosophy and geography.

In 1876 he moved to Gotha. There he took up a position as a high school teacher at the Ernestinum Gotha , where, among other things, Hans Dominik was his student.

He drew this picture of his teacher in his memories: “The teachers in Gotha were also for the most part types and originals. The most prominent one was probably our mathematician Kurd Laßwitz, who became known to the wider public especially through his utopian novel “On two planets”. He wrote witty technical fairy tales for my father's magazine “Zur Gute Zeiten”, but he was also a philosopher, a neo -Kantian , and wrote difficultly learned philosophical works. His life was shrouded in a certain tragedy. Originally he wanted to devote himself to a career as a university lecturer, but his liberal views made it impossible in Prussia and now ended up as a high school professor in Gotha. His jokes and bon mots went from mouth to mouth and could probably fill a stately volume. "

In 1884 he was appointed as a high school professor and in 1909 as a councilor . He owes the latter in particular to his work in the civic “Wednesday Society in Gotha”, which contributed to popular education with popular lectures from the fields of natural science, literature and philosophy. The Wednesday Society was founded in 1884, which was essentially based on the initiative of Laßwitz himself. In 1884 he was elected a member of the Leopoldina . 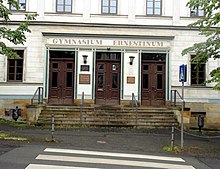 At the entrance, the Ernestinum grammar school commemorates its famous teachers Kurd Laßwitz and Adolf Schmidt with memorial plaques.

A colleague of von Laßwitz, who taught mathematics, English and French at the Ernestinum grammar school, was Adolf Schmidt, the geophysicist and pioneer of the international Esperanto language in Germany , who later became known and appreciated worldwide . The free and pacifist outlook as well as the common commitment in the Wednesday society - Schmidt gave at least 21 lectures here - connected the two. Schmidt, who, like Laßwitz, came from Breslau, later remembered his arrival in Gotha in 1884: “I was warmly welcomed by my dear club brother and compatriot Kurd Laßwitz. He took me to a cozy home that he had found for me, and then to the symposium at Walther am Theater. Here at one end of the long dining room ... I met the majority of my future comrades ... " 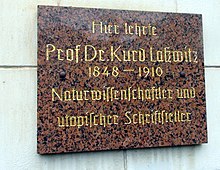 Memorial plaque for Kurd Laßwitz at the Ernestinum grammar school.

For Lasswitz, Schmidt's scientific and social commitment was so inspiring that one of the main characters in his novel "On Two Planets" - namely the scientist Karl Grunthe, who embodies the Kantian ideal of the free, mature personality, is modeled on Schmidt was. Rudolf Lasswitz, the author's son, had revealed it in 1909: “In the Mars novel 'On two planets', my father Kurd Laßwitz… in the person of Dr. Grunthe created an exact copy of Adolf Schmidt. "

Laßwitz corresponded with numerous great minds of his time, with Ludwig Anzengruber and Martin Buber . Bertha von Suttner tried unsuccessfully to win Kurd Laßwitz for her peace movement, since after reading his works she saw him as a kindred spirit.

Kurd Laßwitz was retired after a stroke in 1908 and died at the age of 62 in Gotha, where he was cremated in the Gotha crematorium . His urn is buried in the main cemetery in a grave of honor maintained by the city.

Laßwitz is considered one of the fathers of modern science fiction . He wrote books on physics, epistemology and Immanuel Kant and edited a critical edition by Gustav Theodor Fechner , the founder of psychophysics . Unlike Jules Verne and more so than Herbert George Wells , Kurd Laßwitz used the SF primarily for educational and critical purposes. His drafts for the future are bolder than the works of his two colleagues and contemporaries because they extend further into the future. Therefore, according to his own statement, he repeatedly comes up against the limits of “what can be explained with today's terms”. His novel On Two Planets (1897) with its over a thousand pages is one of the most important German science fiction novels. It has been translated into numerous languages ​​and reprinted several times. On two planets , an important inspiration for the space pioneer Eugen Sänger and for the celestial mechanic Karl Stumpff was the occasion to turn to astronomy in his youth. At the beginning of the 20th century, despite initially limited circulation, the work had some (still insufficiently researched) influence on other authors - for example those of Expressionism . An influence on Georg Heym is certain ; Arno Schmidt appreciated the novel. Laßwitz 'works did not become more widespread until the 1920s.

Wernher von Braun (1912–1977) confessed in a preface to the American edition of the novel: “I will never forget the curiosity and tension with which I devoured this novel in my youth. And I believe that his reading is of particular interest even today, when the eyes of electrons and humans have already collected their first direct impressions of the moon and our neighboring planets. It gives us today an idea of ​​the wealth of ideas at the end of the 19th century, on which the technical and scientific progress of the 20th century is based, and it gives us an idea of ​​the fascinating possibilities ... the generations of the 21st century to come after us. "

The socially critical texts by Laßwitz were largely forgotten after they had been banned by the National Socialists , whose views were incompatible with Laßwitz's humanist and pacifist.

One of Laßwitz's particular merits is the first use of the term remote school in his short essay "Die Fernschule" from 1899. Laßwitz was the first to use the term used to refer to distance learning companies.

Laßwitz's estate is in the Gotha Research Library . It is made accessible through a printed directory which is available online.

A twenty-volume edition has been published as the Laßwitz collection since 2008 by the Dieter von Reeken publishing house, Lüneburg.