After the early loss of his father, Eugen Sänger attended elementary schools in Budapest and Kelenföld . In 1918 was singer through the novel on two planets of Kurd Lasswitz enthusiastic about the then utopian space. In the 1920s he studied civil engineering at the technical universities in Graz and Vienna . 1926-1942 he designed the hypersonic - bodied aircraft , 1929, he was secretly a rocket model ascend. His first dissertation draft with the concept title rocket flight technology was rejected at the Vienna University of Technology . He published a revised part as a book in 1933.

He received his doctorate with a dissertation on the statics of the half-timbered wing in 1930 and began as a scientific assistant with his first research work on rocket propulsion with liquid fuels. From 1932 to 1945 he carried out the first test bench tests with liquid oxygen / hydrocarbon high-pressure rocket motors in tubular construction with large fire nozzle opening angles. Singer became a member of the NSDAP in Vienna-Landstrasse in 1932 (membership number 1.303.775). According to his own statements, he was arrested as an SS man in the Austro-Fascist corporate state during illegal exercises in 1933 and then feared that he would lose his job at the technical university due to his political views. This may have been the reason why the singer rarely appeared as an “illegal”. This inactivity was later blamed on him by the Nazi regime, applications for new admission to the NSDAP from 1939 onwards were refused.

In 1935/36 the Reich Aviation Ministry became aware of Singer. In 1936, during the Nazi era , he moved to Germany and was also naturalized. Here he set up and managed the missile technology research center Trauen for the Reich Aviation Ministry in the Lüneburg Heath and played a key role in the development of high-pressure combustion chambers. In 1938 he first worked on free molecular flow . In 1939 he made the first attempts with supersonic rocket sledges , 1939–1945 first attempts at towing aircraft with high-temperature ramjet engines . In 1942 he was released in trust for a lack of cooperation. He was later hired again as head of department at the German test institute for gliding in Ainring , where he also further developed the ramjet tube (ramjet, i.e. ramjet engine) developed by René Lorin , with which a multiple speed of sound could be achieved. Singer tested it on various German Air Force bombers . During the Second World War he initially worked as part of the America bomber project on the development of a rocket-propelled orbital bomber ( Silbervogel ). After the defeat in Stalingrad in 1943, the project was abandoned due to lack of resources and the focus was on projects that could be implemented quickly. In the long term he worked on the development of a space shuttle , which he called the space boat , which was supposed to be used to transport people and cargo between the ground and orbit or space stations . In 1946, Sänger went to France, where he carried out various developments for the aircraft manufacturers there , including a. the experimental aircraft Nord 1500 , and eventually co-founded the International Astronautical Federation . From his election at the International Astronautical Congress in London in 1951, he headed this for two years.

In his 1949 treatise, The Laws of Motion in Space, Singer dealt with the questions of how something can be brought into orbit around the earth, how long the lifespan of artificial satellites is, and how these are to be connected to the ground stations.

He appeared in 1953 with the lecture on the theory of the photon rocket at the Swiss Federal Institute of Technology in Zurich for the first time with a system of hypothetical corresponding engines and their possible technical significance. In the same year he carried out his first work on molecular reflective surfaces for hypersonic aircraft, 1954–1961 first extensive test bench work on large hot water rockets as launch engines for space planes. His most ambitious project, however, was the conception of photon propulsion for interplanetary and interstellar spacecraft (1953–1959).

Singer was director of the Institute for the Physics of Jet Engines at the University of Stuttgart from 1954 to 1961 and built the institute and the Lampoldshausen rocket test site . In the 1960s, Sänger acted as a consultant on armaments projects in rocket construction in Egypt . (see: Affair with German rocket experts in Egypt ) In 1963 he founded a space chair at the Technical University of Berlin . From 1961 to 1964 he developed the concept of a two-stage space transporter called the RT-8 for Junkers-Werke , the first stage of which is powered by a ramjet, among other things. This research was found again over ten years later in the space shuttle .

After the end of the war, he was committed to the peaceful use of space by humans.

His wife Irene Sänger-Bredt also worked in rocket research. The grave of the singers is in the old cemetery in Stuttgart-Vaihingen .

The journey to other stars

Singer attaches great importance to the fact that stars can also be reached at a distance of many thousands, even millions and billions of light years within a person's lifetime, because time passes more slowly on board faster spaceships due to time dilation . At the conference of the Institute for the Physics of Jet Propulsion in Freudenstadt in 1955, he stated the duration for journeys to the center of the Milky Way was about 18, to the Andromeda Nebula about 26 and around the world 41.9 years, if you enter 1  g accelerates or brakes and approaches the speed of light by converting all of the fuel into photons . For those who remain on earth, periods of e.g. T. many billions of years. 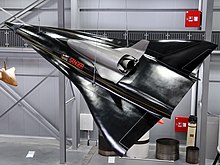 Model of the singer II in the Technik Museum Speyer

The most important development of Sängers during the war, which is still used in every rocket engine today, was the cooling of the rocket engine with its own fuel. The rocket nozzle is cooled with the rocket fuel and at the same time the waste heat from the nozzle is used to heat the fuel. The rocket fuel is used significantly better because the activation energy for the combustion is lower.

From 1946 the Soviet Union took a very serious interest in the Sänger-Bredt proposal of the orbital bomber to transport a warhead of 3,000 kg to a distance of 3,000 km. Stalin's efforts to have singers kidnapped from France were allegedly dashed because the Soviet space expert Grigori Tokaty defected to the British secret service. The technical feasibility was examined in more detail in 1949 as a concept study G-3 under the direction of Helmut Gröttrup and Werner Albring , who were forced to work for Soviet rocket research as part of the Ossawakim campaign . It turned out that there were too many technical hurdles and that some of Singer's assumptions were unrealistic.

Through his work on the orbital America bomber, Singer is also considered a pioneer for the US shuttle program. The Singer space transport system is named after him.

In retrospect, Singer also stands out for his conception of the photon and ramjet propulsion and for his preoccupation with the phenomena that are to be expected in manned space flights over long distances, possibly even to other stars, due to the time dilation.