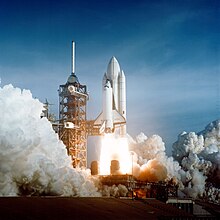 A space shuttle is a reusable transport vehicle for space travel that, after a space mission, returns to the ground like an airplane landing.

Spacecraft are of the land with capsules (eg. As the capsule of the Apollo program or the Soyuz landing capsule equipped) spaceships to distinguish. The landing capsules can only be controlled to a limited extent when flying through the atmosphere.

While the first space pioneers suggested rockets for the way into space , especially Hermann Oberth in his seminal book Paths to Space (1929), the Austrian space pioneer Eugen Singer advocated aircraft with rocket propulsion. Fundamental is the concept about a rocket drive for long-range bombers designed by Singer together with the mathematician and physicist Irene Bredt , his future wife, in Germany . The proposal of a transcontinental America bomber made there led to the Silbervogel project .

In 1952, Bell and Walter Dornberger worked on a BOMI (Bomber Missile), which should consist of 2 stages, which in their first version should both return to earth manned. Other concepts from those years also envisaged winged space gliders for penetration into space. Arnold Ehricke , who also worked at Bell before 1954 , made a proposal for a space station after switching to Convair, which should be composed of three different rocket upper stages, whereby the manned upper stage of the third rocket should consist of two 2-seat space gliders. In 1958, with an obviously changed concept, a plastic model kit of a space shuttle drawn by Ehrike was released by Revell , called "Convair Shuttlecraft", which was intended for transporting people to the space station. Meanwhile, work on Dyna-Soar had started, but was discontinued in 1963.

The US space shuttle is the only type of space shuttle that has actually been used for manned missions in space . Since the 1970s, five spaceflight-compatible specimens have been built, with a combined total of 135 take-offs. Two of the five spacecraft, the Challenger and the Columbia , have crashed in their 30 years of service. 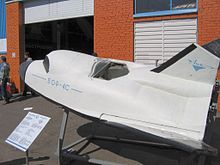 BOR (Bezpilotnyj Orbitalnyj Raketoplan) was the name of a series of test missiles with which experience for the development of the Soviet space shuttle Buran was to be gained. In 1973 the Russian VPK announced a space program to research space shuttles. The aim of the BOR program was to develop heat protection shields and the general aerodynamic structures of a space shuttle. The last four of these test devices ( Kosmos 1374, 1445, 1517 and 1614) were used for orbital flights.

The Soviet space shuttle Buran ( Russian Буран for Buran - snowstorm) was approved in 1976 and developed from 1980. The Buran 1.01 was launched into orbit on November 15, 1988 by an Energija rocket for its first and only flight . Since the Buran had no life support systems, the flight was unmanned. It lasted about 3.5 hours.

With the second Soviet space shuttle Ptitschka ( Russian Птичка - little bird), regular flight operations should begin in 1991. After the collapse of the Soviet Union in 1991, however, the project became too expensive. The Russian space shuttle program officially ended in 1993.

X-37 is the name of an unmanned experimental spaceplane that was originally developed on behalf of NASA by Boeing Phantom Works , a subsidiary of Boeing. It is an unmanned, reusable space glider. Several orbiters have carried out and continue to carry out mostly classified missions for the US Air Force since 2010.

Prototype of the Dream Chaser for tests within the atmosphere (2013)

The Dream Chaser is based on the concept of a support hull . The private US space company SpaceDev developed the space glider. In 2008 SpaceDev was acquired by the Sierra Nevada Corporation . She is continuing the project under the manned Commercial Crew Development program (since 2010) and NASA's unmanned Commercial Resupply Services program.

From 2021, the Dream Chaser is to regularly fly to the International Space Station (ISS) as an unmanned supply spaceship.

On February 24, 2007, the prototype of the planned space shuttle Castore was tested in Italy , a nine-meter-long, almost four-meter-wide missile weighing 1,250 kg. The aircraft was pulled with an unmanned high-altitude balloon to a height of 25 km and slid to the ground from there. The behavior when entering the atmosphere was measured using numerous sensors, and the sound barrier was also broken. Castore eventually fell into the Mediterranean as planned and was rescued. Further scientific, perspective, but also manned flights are planned for the future.

SpaceLiner is a concept for a suborbital, hypersonic, winged passenger transporter that has been or has been under investigation at the German Aerospace Center (DLR) since 2005 .

SHEFEX ( Sharp Edge Flight Experiment , German: "Sharp-edged flight experiment") is a project of the German Aerospace Center (DLR) for new design principles for space capsules and spacecraft with re-entry capability into the atmosphere and their integration into an overall system. As part of this project, it was planned to construct a space glider by 2020 that would have been available for traceable experiments under weightlessness . The space glider project was called REX-Free Flyer . 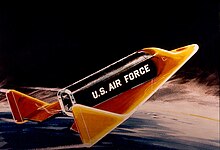 Artist's impression of the Dyna-Soar upon re-entry

The project Dyna-Soar ( English dynamic soaring for Dynamic gliding ) of the US Air Force launched in 1957 and had the goal of developing a space plane that can be used both as a reconnaissance and bomber aircraft as an enemy for rescue operations in space, satellite maintenance and sabotage Satellite . The missile, also known as the X-20, was 10.77 meters long and 6.34 meters wide and was supposed to have a crew of one man. A Titan-III was planned as a launch vehicle for orbital flights .

The Mikojan-Gurewitsch MiG-105 "Spiral" (nickname: Lapot Russian лапоть for bast shoe - because of its nose shape) was developed by the Soviet Union in 1965 as part of the Spiral EPOS program with the aim of building a spacecraft with reusable components. It served as a prototype for the space glider (OS). Other components were the auxiliary rocket (RB) and the supersonic carrier aircraft (GSR). The development of Spiral-EPOS was finally stopped in 1975 in favor of the development of the space shuttle Buran .

The LKS space shuttle ( Russian Лёгкий Космический Самолёт , dt. "Light Cosmos Airplane") was a project under the direction of Vladimir Nikolayevich Tschelomei as a smaller and cheaper answer by the Soviet Union to the US space shuttle. However, this small space shuttle was discarded in favor of the larger Buran. A full- size demonstration model of the LKS was produced.

Model of the Hermes

The European Space Agency (ESA) planned with the space glider Hermes a system similar to the Buran, for which the Ariane 5 was intended as a launcher. Unlike the Soviet system, Hermes was not supposed to sit piggyback on the launcher (in parallel staging), but at the top (in tandem staging). With this configuration, the entire carrier system would have been less error-prone, since parts departing on take-off would not have damaged the outer wall of the shuttle, which triggered the Columbia disaster in 2003. Development was discontinued in 1992 because of the high costs of around six billion euros.

The NASA HL-20 was a 10-seat spacecraft project in the 1980s and 1990s based on lifting body research. 1: 1 dummies were made and aerodynamic tests were carried out. The data was later used for the Dream Chaser and the Prometheus concept from Orbital Sciences .

The Japanese space agency JAXA developed a space shuttle with the HOPE-X project . Plagued by financial and technical problems, the project was abandoned in the mid-2000s.

Eugen Sänger designed a space glider in the 1960s, which was further developed under the name Sänger II in the late 1980s, but was not built.

Concept studies and preparatory developments for an unmanned space transport system, the hopper, were carried out at ESA .

The Russian space agency Roskosmos developed a space glider with the Kliper (depending on the translation also Klipper or Clipper). It should be able to accommodate 700 kg payload and six astronauts. The maiden flight was planned for around 2012. Cooperation with the ESA was also discussed. In 2007 the program was discontinued because of excessive costs.

Drawing of the Skylon

The British concept study Skylon envisaged a space shuttle that takes off horizontally with air-breathing engines. At an altitude of 26 km, when the oxygen in the upper layers of the atmosphere is no longer sufficient for operation, the system switches to an internal oxygen tank, which enables it to reach the earth's orbit. Skylon should be able to carry a payload of 12 t or 24 passengers.

X-33 was the name of a planned successor to the space shuttle , which was called "Venture Star". The aim was to create a completely reusable space shuttle that would take off vertically with the help of innovative aerospike engines and then land again like an airplane.