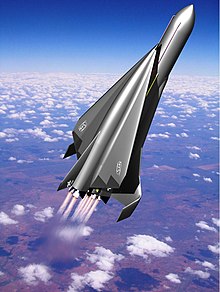 SpaceLiner is a vision for a suborbital, hypersonic , winged passenger transporter, which has been under investigation at the German Aerospace Center (DLR) since 2005 . The cost-effective transport of larger satellite payloads into orbit was named as a second application of the SpaceLiner.

The DLR developed the following vision for a space shuttle:

The two-stage, vertical take-off configuration of unmanned booster and manned passenger stage ( orbiter ) is designed for 50 passengers and has a total of eleven liquid rocket engines (booster 9, orbiter 2), which are operated with cryogenic oxygen ( LOX ) and hydrogen ( LH2 ). After the engines burn out , the orbiter stage can cover large intercontinental distances in a very short time in gliding flight. Depending on the mission, altitudes of 80 kilometers and Mach numbers over 20 can be reached. Flight times with the SpaceLiner should only be 90 minutes on the Australia-Europe route or no more than 60 minutes on the Europe-California route. With accelerations of a maximum of 2.5 g , the loads on the passengers on these missions are still below those of the space shuttle astronauts. In addition, the concept provides for the passenger cabin to be designed in the form of a separate escape capsule, which can be separated from the vehicle in an emergency and should enable the passengers to return safely to earth.

The DLR considered it possible to commission the first system between 2040 and 2050. The core aspect of the concept is a complete reusability in connection with a series production comparable to aviation, through which an increased cost efficiency compared to today's space transport systems is expected. A central challenge lies in improving the safety and reliability of space components such as B. rocket engines, so that they are suitable for daily use in passenger transport.

In the early 2010s, the SpaceLiner was in the preliminary design stage. Based on the results of the previous investigations, the design should be advanced in the course of development and with increasing consideration of sub-system development and integration. At the same time, studies were planned with regard to variants with changed requirements and specifications, the results of which could also be incorporated into the entire design process.

SpaceLiner 2 denotes a concept for a first version in which the integration of an active cooling system for thermally highly stressed components in the event of atmospheric re-entry was provided.

The Vision SpaceLiner 4 was intended as a further development of the SpaceLiner 2 with improved aerodynamic and flight mechanical characteristics. In the FAST20XX research project funded by the EU, various technologies required for the SpaceLiner were examined experimentally and numerically in more detail using this configuration.

In 2013, the SpaceLiner 7 concept was being investigated at DLR . As part of a numerical optimization , the use of a single instead of a double delta wing was tested to improve the aerodynamic, thermal and structural-mechanical properties in hypersonic flight . In addition, the design and integration of subsystems such as the passenger cabin, the cryogenic tanks, the fuel delivery system and the heat shield were designed.

This design work was financed by DLR internal funds as well as within the framework of EU-funded FP7 projects such as FAST20XX and CHATT. In addition to DLR, various partners from the European aerospace sector are or have been involved.

The SpaceLiner concept is designed to use a single type of reusable liquid rocket engine that operates on the full flow cycle with full pre-combustion. The expansion ratio of the nozzles is adapted to the different missions of the booster and orbiter. The high-energy combination of liquid hydrogen with liquid oxygen is intended as fuel.