The boosters of a Falcon Heavy are about to land 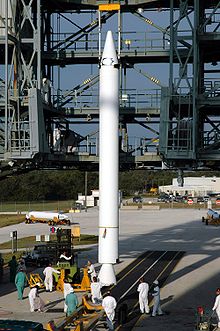 In space technology and military missiles, a booster is an auxiliary missile that is used at launch and then dropped. It can be attached to the launcher or an external tank (as with the space shuttle ). Boosters are used to generate additional thrust during take-off.

Are they burned in conventional launchers in 40-60 km altitude, they are - usually some time before the end of firing the first rocket stage - separated and fall back to the surface, in the water or on the mainland. With the Chinese LM-2 and LM-3 missiles , the latter is the rule and particularly risky, as they are operated with highly toxic hydrazine and sometimes fall on fields or in residential areas (although mostly after warning for the respective region). The speed achieved by boosters in relation to the atmosphere is usually not high enough to cause them to burn up. Some larger boosters such as those of the Space Shuttle , the Ariane 5 and the Energija rocket land or land softly with the help of parachutes in order to be inspected for errors and possibly reused. The Falcon Heavy's boosters land vertically using engine recoil and landing legs.

Boosters are also used in aircraft and other atmospheric missiles to briefly increase thrust. For example, missiles with ramjet require a different drive source to achieve the minimum speed required for the engine. Small rocket boosters are also used to jump-start aircraft. Drones like the CL-289 are started from a standing start using a rocket booster, but larger military aircraft can often be optionally equipped with boosters in order to shorten the take-off distance with a JATO start.

According to the fuel used, a distinction is made between two types:

Often, depending on the payload mass, two or four boosters are used to guarantee symmetrical thrust ratios; However, these can also be achieved with a combination of three, six or nine boosters. At Energija , the boosters were bundled in pairs and the rocket could be used with two (realized), three or four such pairs of boosters. The Delta II used 3, 4 or 9 boosters. Some missiles such as the Atlas V can also use boosters in asymmetrical ratios; in this case the thrust vector of the booster still has to lead through the center of mass of the rocket.