Skylon was a design for an unmanned space shuttle for the British company Reaction Engines .

For propulsion, it uses an engine that makes it possible to reach an orbit with a single stage. This process is known as SSTO (Single Stage to Orbit). The company is planning an entire fleet of these vehicles, the design is designed to be reusable up to 200 times. Studies have calculated that the costs per kilogram of payload could decrease from the previous 18,000 € / kg to 800 € / kg (as of 2011). This includes research and development costs . The cost is expected to fall much further once the initial cost is amortized. The total cost of the program is estimated by the developer to be approximately $ 12 billion. Unit costs of $ 190 million are targeted.

The hydrogen-powered aircraft would take off from a normal runway and accelerate to around Mach 5.4 up to an altitude of 26 km . Up to this height, as with conventional aircraft engines, atmospheric oxygen would be used in order to then switch to the internal tank with liquid oxygen (LOX) to reach orbit . The payload, which can weigh up to 12 tons, could be released there, after which the space shuttle would land again on earth . The payload could be transported in a standardized payload container.

The re-entry would be similar to the space shuttle . The aircraft must also be protected from the re-entry heat with a ceramic outer skin. If the developer's plan works, Skylon would be ready to go again after two days of inspection and necessary maintenance. In 2010 only a small part of the funds required for the development and construction of a Skylon prototype was secured. The research work on the SABER engine continues with the support of ESA . In January 2011, REL sought additional funding from the UK government and received $ 350 million. The testing of the key technologies (especially the pre-cooler) was successfully completed in November 2012; the final phase of the project follows.

Skylon is based on the earlier project hotol by Alan Bond , whose development began in 1982. At the time, space technology focused specifically on reusable launch systems, such as B. the American space shuttle . Working with British Aerospace and Rolls-Royce , a design emerged that turned out to be so promising that the British government invested $ 3.2 million in funding for the project.

Skylon developed from the HOTOL project.

This technology demonstration program lasted approximately 2.5 years and will be funded by ESA with another million. Through this program, Reaction Engines Ltd rises on the Technology Readiness Level scale from 2 to 3 to a value of 4 to 5. Former British Minister for Science and Innovation Paul Drayson made a speech about Skylon in 2009: "This is an example of a British company developing world-beating technology with exciting consequences for the future of space."

From 2010 the focus was exclusively on the development of the engines with the help of another million euros from ESA. In January 2011, REL asked the UK government for additional funding for the Skylon project. On April 13, 2011, REL announced that the Skylon design had passed several rigorous test runs. On May 24, 2011, ESA officially declared that the design was feasible as no defects could be identified.

The greatest success of the static tests of the SABER engines was achieved in June 2011, which marked the start of phase 3 in the Skylon development program. A REL spokesman announced that around 350 million euros would be invested in the project, although this is dependent on the successful completion of the tests with a full engine in June 2011.

On May 9, 2011, REL announced that a Skylon prototype could make its first suborbital flight as early as 2016. One possible route would be from the ESA spaceport in French Guiana across the Atlantic to the Esrange rocket launch site in northern Sweden . Alan Bond announced on December 8th at the Appleton Space Conference that the commissioning of Skylons will be delayed from the previously targeted year 2020 to 2021-2022.

In April 2012, REL confirmed the successful completion of the first test phase of the engine's pre-coolers. REL announced on July 10th that two-thirds of a series of tests had passed. On July 13, ESA Director General Jean-Jacques Dordain told Space News that ESA would hold talks with REL for the purpose of "technical understanding".

In late 2016, Reaction Engines removed the Skylon project from its website.

The Skylon spaceplane is designed as a twin-engine, "tailless" airplane with adjustable duck wings

Skylon is a single-stage space shuttle (SSTO = single stage to orbit ), so it reaches Earth orbit without any additional aids (such as boosters or additional fuel tanks). Proponents of SSTO claim that because of their complexity, problems and errors can occur more quickly in multi-tier systems. It is also extremely difficult, sometimes even impossible, to reuse some parts, which causes great costs. They therefore hope that SSTO drafts will result in enormous cost reductions for space flights. It is planned that Skylon will take off from a specially reinforced runway, advance into low earth orbit, and after re-entry land on a runway like a normal airplane.

The Skylon C2 design is characterized by a large cylindrical payload chamber that is 13 m long and 4.8 m in diameter. 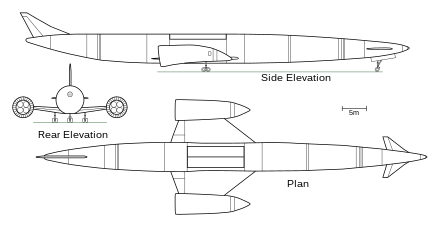