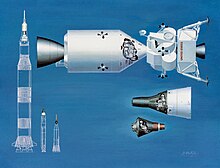 Right: The US spaceships Apollo, Gemini and Mercury in size comparison. The missiles on the left are shown on a different scale.

As spaceships or space vehicles in general all vehicles referred to the movement in space ( space ) were created. Parts of these spaceships that have an atmosphere inside and that are not provided with aerodynamic control elements for entry into an atmosphere are also called space capsules .

Spacecraft, analogous to watercraft and aircraft, are generally devices that are mainly designed for locomotion outside the earth's atmosphere and that can make orbit changes by technical means. A spacecraft, with which transport and supply flights to space stations are undertaken, is called a space transporter or supply spaceship . All space transporters developed so far have been unmanned space vehicles. The only very limited maneuverable unmanned space probes , space stations and, above all, satellites are more likely to be assigned directly to the higher-level spacecraft , although they are also equipped with their own drive for orbit corrections and thus have the characteristics of spacecraft. Also spacesuits (especially those like the Manned Maneuvering Unit ) are attributable to the spacecraft.

Spaceships are colloquial and in the narrower sense spacecraft that have been built in the context of manned space travel for the transport of people or freight in space. But also modular systems, which consist of a drive unit, landing capsule and pressurized sections for cargo ( payload , abbreviated P / L for English. Payload ) and crew, are called spaceships. In German, the word spaceship is used for real, but above all for fictional spaceships. Spaceships have also been indispensable main components in science fiction since Jules Verne's visionary ideas about the future . B. the spaceship Enterprise . The term spaceship is based on outdated linguistic formulations (spacecraft travel, space travel). In the specialist literature today one speaks preferably of manned spacecraft.

The manned spacecraft include the reusable space shuttles and space planes , as well as the space capsules that are only partially reusable. Since the first manned spacecraft such as Vostok and Mercury did not yet allow orbit changes, they are not yet actually spacecraft. 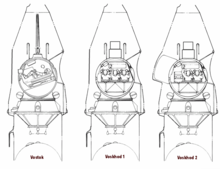 The first manned spacecraft in space was the Soviet single-seat Vostok 1 , which left Earth on April 12, 1961 and orbited the Earth once. A few weeks later, on May 5, 1961, the United States was able to conduct a 16-minute suborbital flight as part of the Mercury program . Then the two- to three-seat Vozhod , Gemini and Soyuz spaceships were used. Later followed with the Apollo program, the only missions to date in which humans left orbit of the earth. These were the flights to the moon with the Apollo space capsules. The first mission, Apollo 8 , went to the moon, orbited it ten times, and then flew back to earth. With the US space shuttle , the first reusable spacecraft came into use in the 1980s. With him up to seven astronauts could get into space. In 2003, the People's Republic of China was the last nation to join the ranks of nations that build and launch manned spaceships. In the future, both private companies (e.g. with SpaceShipTwo ) and other countries such as India want to develop manned spacecraft.

Until the introduction of the space shuttle, NASA relied exclusively on non-reusable spaceships with landing capsules.

In contrast to NASA, Russian space travel has never separated from capsule technology, although attempts have been made to do so with the Buran program. Although their basic design dates back to the 1960s, the Soyuz spacecraft and the Progress transporters based on the same technology are now considered to be the most reliable aircraft for supplying the International Space Station .

The following spaceships intended for manned use have already flown or are still in active development:

1 The deployment time also includes unmanned test flights.
2So far only flights below the Kármán line ; no schedule for crossing the 100km mark.

As with any spacecraft, a spacecraft consists of various structures and subsystems necessary for the operation of the missile. These consist of the primary structure into which the other subsystems are integrated. This includes the energy supply ( solar cells , accumulators ), the temperature control system and the on-board computer system for control and data management . Since the main feature of a spacecraft is its ability to change orbit, it uses a corresponding drive system for attitude and position control (orbit control) and (if planned) engines for entering or leaving an orbit or for landing. The main propulsion in a vacuum is still mostly carried out by conventional rocket engines . For the time being, only designed drives such as the solar sail are not yet used by spacecraft.

In manned spacecraft, a life support system is also installed, which enables the people (and living beings) on board to survive in space. At the same time, both the launch vehicle and the spacecraft are designed in such a way that they have increased reliability and fault tolerance compared to the unmanned versions . This is realized , for example, through increased redundancy and additional security and monitoring systems for the detection, avoidance and defense of error situations. Appropriate measures are taken for particularly high-risk moments of space flight (e.g. take-off and landing, docking). This ranges from the aborted launch (see e.g. Space Shuttle abort modes ), rescue missiles to the control of the spacecraft in orbit (e.g. Rendezvous Pitch Maneuver on the Space Shuttle).

In the case of spacecraft that are designed for re-entry into the atmosphere of the earth (or other celestial objects) and (soft) landing on the surface or watering , a corresponding heat shield or a corresponding landing system is used. A heat shield can be dispensed with when landing on celestial bodies without an atmosphere (such as the Earth's moon). The landing systems differ considerably depending on the system. While the landing system of the first spacecraft (such as Vostok) consisted of an ejector seat and a parachute for the spaceman, later systems mostly used parachute systems and, in the final phase of landing, brake rockets or airbag landing systems were used. In the case of space shuttles and space planes, as with aircraft, landing gear is carried out on a runway. With the US lunar shuttles and planned future spacecraft, a pure landing by brake rocket is also used.

In contrast to reusable space shuttles such as the US space shuttle , manned spacecraft, the crew of which are brought back to earth with landing capsules, are technically less complex and therefore cheaper. So far, however, they can only be used once because the heat shields of the landing capsules are not reusable and are largely removed when they re- enter the earth's atmosphere . The landing capsules are largely without an aerodynamic shape, as they mainly move in space and do not fly when landing , but return to the ground on parachutes . However, the landing capsules have a certain shape that allows them to maintain course and stability while entering the Earth's atmosphere.

Remaining at the end of life

Some landed spaceships (e.g. space shuttles) or their return capsules are shown as exhibits after the research has been completed after the flight.

If a functioning control system or the flight route permits, other parts of spaceships are often directed to crash into an area of ​​the sea that is sparsely populated and navigable in order to minimize the risk of accidents. The same applies to obsolete satellites.

According to the BBC, an area of ​​around 1500 square kilometers in the middle of the South Pacific between Australia, New Zealand and South America is regarded as the “graveyard of spaceships” with the remains of around 260 spaceships on the bottom. Some parts, such as uninjured spherical tanks and foam, can also float away and get stranded elsewhere.

Burned-out one-way rocket stages fall back to earth a short distance from the launch site - mostly into the sea. Eliminated missiles, which can no longer be controlled due to a lack of fuel or a malfunction, sink increasingly deeper due to air friction. Finally, the catastrophically increasing friction heats the body up to glow with melting and oxidation of many substances. When it burns up , the body is dismantled, larger fragments fall observably and quickly to the ground, often into the sea, small dust particles sink only very slowly