A suborbital flight is a flight into space that neither escapes the gravitational field of the celestial body from which it took off, nor goes into orbit around this body. Instead, the aircraft will fall back towards the ground - unless it continues to counteract the force of gravity with a running drive .

A space flight takes place suborbitally when the orbital energy is not sufficient for an orbit that is above the surface of the respective central body, usually the earth, at any point in time. The intersections of the orbit with the earth's surface represent the start and destination of the suborbital flight. Suborbital flights are usually only referred to as space flights, which, in contrast to the flight of an airplane, are ballistic, i.e. H. take off without thrust or buoyancy.

One speaks of a space flight when the boundary to space is crossed. There are different views on the location of this limit. A common definition comes from the international air sports association FAI ; accordingly, space begins at the so-called Kármán line at an altitude of 100 km. The United States Air Force , however, already evaluates flights over 50 miles (about 80.5 km) as space flight.

Suborbital aircraft are generally less expensive to develop, build and operate than orbital spacecraft. Because of their lower airspeed, they do not need such a powerful propulsion system or such complex heat protection agents to survive re-entry from orbit unscathed. So come as SpaceShipOne and SpaceShipTwo made without significant heat protection, while both the Space Shuttle and the landing capsule orbital spacecraft like the Soyuz because of the significantly higher degraded kinetic energy have massive heat protection mechanisms. The structural load due to air resistance is also lower when re-entering at a lower speed, so that the aircraft does not have to be built as robustly.

An American Talos Terrier Oriole on the launch pad

Suborbital flights are used, for example, to study the thermosphere and the ionosphere , the uppermost layer of the earth's atmosphere that extends several hundred kilometers into space. Another application in research are short experiments under weightlessness , such as those carried out with parabolic flights by airplanes. So-called sounding rockets are used for this purpose .

Suborbital flights also take place in the development of some launch vehicles and spaceships . For example, the command module of the Apollo spacecraft was tested with the suborbital missions AS-201 and AS-202 . Experimental aircraft such as the X-15 were also built from the outset for suborbital test flights only.

Another possibility is the launch of an orbital missile with a suborbital flight; After separation from the rocket, the aircraft must then accelerate on its own to the first cosmic speed. One example of this is the Boe-OFT test flight with the US spacecraft CST-100 Starliner at the end of 2019 . By dispensing with an orbital launch, the Atlas rocket used did not require additional boosters , which would have been necessary for greater acceleration. In addition, any aborted take-offs of the manned spacecraft at lower speeds are less critical.

Tourist flights to orbit the earth cost tens of millions of dollars and there are few flight opportunities. In order to sell space flights to a wider audience, the US companies Scaled Composites and Blue Origin developed suborbital space planes for tourism purposes. Both designs are still in the testing phase. Both will land on or at the same spaceport where the journey started.

The Scaled Composites project goes back to the Ansari X-Prize . This competition, which was launched in 1996, was awarded a prize of 10 million US dollars for the first privately financed, manned suborbital flight. Scaled Composites won the competition with its SpaceShipOne space glider . Virgin Galactic , a joint venture between Scaled Composites and the British Virgin Group, is responsible for the operation and marketing of the current SpaceShipTwo aircraft .

Blue Origin designed the reusable New Shepard rocket , which propels a space capsule to a height of 100 km; then the spaceship lands on a parachute. A first manned flight is still pending.

The mission profiles of military ICBMs and larger medium-range missiles also correspond to those of a suborbital flight.

Intercontinental freight and passenger transports through space are also conceivable. The flight time between any location on earth could thus be reduced to less than an hour. Both Virgin Galactic and the US space company SpaceX announced in the late 2010s that they would like to offer such intercontinental space flights in the future. 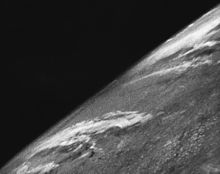 The first unmanned suborbital flight was also the first ever space flight. He managed the Nazi Germany on June 20, 1944, the flight MW 18014 of ballistic artillery rocket unit 4 (better known by the later propaganda called "Vengeance Weapon 2", or "V2"). The flight reached an altitude of 175 kilometers.

On October 24, 1946, the USA photographed the earth from space for the first time with a further developed A4 / V2. The first living beings were brought into space with the same type of rocket in the following years, including the rhesus monkey Albert II as the first mammal on June 14, 1949.

The flight of Shepard on May 5, 1961 is led by the FAI in class K-1 (suborbital manned missions) as the record flight with the greatest altitude (186.307 km) and also the greatest mass of the spaceship used (1832.51 kg). The abortion of the Soyuz 18-1 mission on April 5, 1975 brought the two cosmonauts Lasarew and Makarow in their 6830 kg spaceship to a summit height of 192 km, but these involuntary best performances were never submitted to the FAI for recognition.