Shepard was an excellent student. Fascinated by airplanes, he often cycled to the nearest airfield on weekends, where he did odd jobs so that he could occasionally fly in airplanes.

He graduated from Admiral Farragut Academy in Toms River , New Jersey in 1941 . From 1941 to 1944 he studied at the United States Naval Academy in Annapolis , Maryland . Until the end of World War II , he then served in the US Navy on the destroyer Cogswell in the Pacific .

After the war he was trained as a pilot and served as a naval pilot, including on aircraft carriers in the Mediterranean .

In 1950, Shepard began his test pilot training in Patuxent River , Maryland . After graduating in 1951, he tested various types of fighter jets and, among other things, worked out landing techniques for the new aircraft carriers with angled runways. After he had made his Bachelor of Science at the United States Naval Academy in 1944, he came to Naval War College in Newport (Rhode Island) , where he received a Master of Arts in 1957. He has also held numerous honorary degrees.

The first American in space 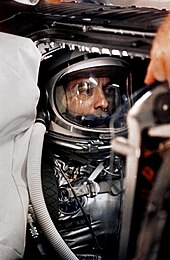 Alan Shepard before the start of Freedom 7

Shepard was one of 110 military test pilots selected by NASA as potential astronauts, but the invitation to Shepard was lost. Nevertheless, he was one of the seven (Mercury Seven) who were introduced by NASA on April 9, 1959 as America's first astronaut group.

On February 21, 1961, Shepard learned that he was scheduled for the first manned flight of the Mercury spaceship. This news has not yet been published.

The launch of the Mercury-Redstone 3 mission (Mercury capsule MR-3) then took place on May 5, 1961. Shepard had given the spacecraft the name Freedom 7. This flight was not planned to orbit the earth, but as a suborbital ballistic trajectory , it reached an altitude of 187 km. After 15 minutes and 22 seconds, Freedom 7 landed safely in the Atlantic . After Yuri Gagarin from the Soviet Union , who orbited the earth once in 106 minutes on April 12, he was the second person in space.

For the last mission in the Mercury program, Mercury Atlas 9 , he was scheduled as a reserve pilot in the event that Gordon Cooper should fail, but the flight took place on May 15 and 16, 1963 without any problems.

Shepard pushed for the last remaining Mercury spacecraft, the Mercury 10, to be used for a long-term flight, with himself as a pilot and Cooper as a replacement. He even had the spaceship painted with the lettering "Freedom 7 II", but NASA decided that all forces should be concentrated on the upcoming Gemini program so that Shepard could not make the hoped-for orbit around the earth.

No Gemini flight for Shepard

Shepard was nominated as commander for the maiden flight of the Gemini spacecraft, Gemini 3 . He had already started training with Tom Stafford when he was diagnosed with a health impairment to his left inner ear: Shepard suffered from Menière's syndrome . Excessive pressure of the fluid in the inner ear leads to disorders of the sense of balance , dizziness and nausea, which impaired fitness to fly.

In March 1966, he headed the committee to investigate the plane crash that led to the deaths of astronauts Elliot See and Charles Bassett .

The flight to the moon

In early 1969, Shepard had an operation on her inner ear. In May he was certified again as fully airworthy so that he could resume training as part of the Apollo program . He handed over the management of the astronauts office to Tom Stafford .

Shepard was initially scheduled to be in command of the Apollo 13 mission, due to start in April 1970, but NASA management urged him to give him more time to prepare as he had been away from astronaut training for a long time. Therefore, Shepard was moved to Apollo 14 along with Stuart Roosa and Edgar Mitchell .

This moon flight took place from January 31 (third moon landing on February 5, 1971) to February 9, 1971. Shepard was 47 years old at this point, by far the oldest of the moon travelers. He was the first Mercury astronaut to make it to the moon, and he was to be the only one. As he walked on the moon, he said, "Al is on the surface and it's been a long way, but we're here."

Al Shepard went down in history as the first golfer on the moon. He had taken two golf balls to the moon, as well as a 6 iron , which he temporarily attached to a geological instrument. Because of the stiff spacesuit, he had to hit with one hand. He missed the first ball at first, only to move it forward a meter or two on the second attempt. The third hit then hit, and with a fourth hit he could hit the second ball a few hundred meters.

During the following lunar flights, Apollo 15 in July 1971 and Apollo 17 in December 1972, he served as a liaison officer ( Capcom ) in flight control.

After the moon flight

In June 1971 he resumed work as head of the astronauts office. He was appointed delegate to the UN General Assembly by President Nixon in July and remained in this office from September to December 1971.

Shepard resigned from NASA and the US Navy on July 31, 1974, handed over management of the astronaut's office to John Young and concentrated on his business as a businessman, which had made him a millionaire even in the astronaut days .

He became chairman of the Marathon Construction Corp. in Houston and the Windward Distributing Company and has served on the boards of several companies.

His company Seven Fourteen Enterprises (named after Freedom 7 and Apollo 14) served as a holding company for his various business activities.

In 1984, along with the other Mercury astronauts and Betty, Gus Grissom's widow , he founded the Mercury Seven Foundation, which awarded scholarships to students in need. In 1995 the foundation was renamed the Astronaut Scholarship Foundation and Shepard became president and chairman until he handed both offices over to former astronaut Jim Lovell in October 1997 .

In 1996, Alan Shepard was found to be suffering from leukemia, from which he died in 1998 at the age of 74. His wife Louise, to whom he was married for 53 years, passed away just a month later. They left two daughters: Laura (* 1947) and Juliana (* 1951). The Shepards also raised their niece Alice, sometimes referred to as a daughter.

Alan "Al" Shepard was considered one of the most difficult people in the entire Apollo program. Opinions about him were divided in the astronaut corps. He enjoyed respect and recognition, but also had to live with resentment.

Some described him as a very opaque, but highly intelligent and shrewd choleric, whose moods - especially with regard to his influence on the selection of the teams - were feared by the other astronauts. In the book A Man On The Moon , the author Andrew Chaikin describes him as a character who in German would probably be called "fox". Shepard had a room-filling charisma, but also a "dripping arrogant self-confidence". He was avoided by not a few astronauts because of this, but conversely, he also kept his distance. With his - so literally - "ultimate influence on astronaut careers", he is also said to have been nicknamed "Big Al". In this context Chaikin quotes an astronaut (not named) with the words: “You had the feeling that if it came down to you or him, frankly, he would cut your balls off so fast you wouldn't know that they're gone for a little while. "

This extreme character is also themed in the mini-television series From the Earth to the Moon . It shows that Shepard's secretary supposedly had put up daily changing photos of her boss - played by Ted Levine - on which he was depicted in the various states of mind, under the heading "Mood of the day" to warn visitors.

It is also pointed out that Shepard's Apollo 14 flight was very much under criticism, as he was probably the most inexperienced commander of the Apollo lunar program and had been out of service for a long time after his illness as unfit to fly. In addition, the accusation can be heard again and again that Shepard had his friendship with Deke Slayton , who was responsible for the Apollo crew division, exhausted in order to enforce his moon flight.

The former astronaut Eugene Cernan addresses the criticism of Shepard in his book The Last Man on the Moon and says that over time he realized that his future friend, despite the long flight break, was even at the time of the Apollo 14 mission possessed talents and qualities that he and most other astronauts would not have been able to equalize with much effort.

Shepard was inducted into the National Aviation Hall of Fame in 1977 as the second astronaut . He was one of the first six astronauts to be awarded the Congressional Space Medal of Honor on October 1, 1978 .

In December 2006, a Lewis-and-Clark-class supply and ammunition transporter was named after him, the USNS Alan Shepard (T-AKE-3) .

On December 4, 2008, a Piper 28 was sunk in a controlled manner in the Kreidesee Hemmoor . This formerly belonged to Shepard and has since been dived to a depth of almost 10 m.

To mark the 50th anniversary of his first trip into space, the US Post issued a commemorative stamp with the picture of Alan Shepard in 2011.

Astronauts from the Mercury program