Seaplane in the port of Hamburg 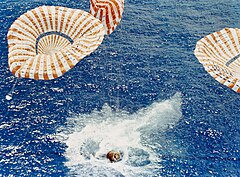 Splashing of an Apollo CM 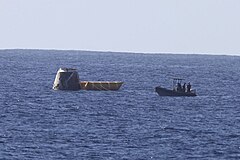 Dragon capsule (C1) after the splash

Splashdown is the landing with a seaplane , flying boat or spacecraft on a ocean , river or lake . An emergency landing of normal aircraft on the water is also referred to as a ditching .

In the first two decades of manned space travel , US spacecraft in particular landed on the water in the Pacific or Atlantic and were then salvaged by helicopters . This practice was revived after the space shuttle program was completed. The spacecraft Dragon , launched by the private company SpaceX , first hit the Pacific Ocean on December 8, 2010 .