As Quintenzirkel is referred to in the music theory a series of twelve spaced tempered fifths arranged tones, the last tone in the same pitch class has as the first and can be accordingly set equal to it. However, this equation is only possible due to an enharmonic mix-up that can be made anywhere. Returning to the beginning results in a “tour”, which is graphically represented as a circle ( Latin : circulus “circle”).

The circle of fifths does three things:

The oldest representation of the circle of fifths can be found in a General Bastractat printed in 1711 by Johann David Heinichen .

Since you can replace fifth steps up with fourth steps down, it is possible to take a tour of the circle of fifths within an octave:

This is also the most common sequence of bass buttons on an accordion , called a Stradella bass .

Circle of fifths and spiral of fifths

Fifth spiral (with a fifth- only tuning )

The circle of fifths is not a system of order given by nature, such as the overtone series , but an artificial construction that is only conceivable on the basis of tempered moods and their possibility of enharmonic reinterpretation of tones. In a tuning with theoretically pure fifths, such as the Pythagorean tuning , no closed circle of fifths , but only a spiral of fifths can be realized: Twelve fifths ( cgdaeh fis cis gis dis ais eis his ) enclose an interval of about seven octaves; However, taking the fifths and octaves with their pure vibration speed ratios 3: 2 and 2: to 1, as is shown by calculation that the Abschlusston his the fifth row slightly by 23.5 cents (by almost a quarter semitone) is higher than that reached at the same time last c of the octave row. This difference, called the Pythagorean comma , prevents the equation of his and c as well as all other enharmonic tone pairs ( f sharp / gb, d sharp / es, a sharp / b , etc.) , also different by the Pythagorean comma . The sequence of fifths does not close to a circle, but can only be represented as a spiral. If one were to try to close the circle "by force" regardless of this, it would only be possible via a so-called wolf fifth .

The problem of closing the spiral of fifths to a circle without such jarring wolf fifths is solved in today's widespread equally tempered tuning by reducing each of the twelve fifths by 1/12 of the Pythagorean comma, so that with the twelfth fifth step you get exactly to the seventh Octave of the original note. The even distribution of the comma ensures that, apart from the octave, no interval sounds completely pure, but the imperfections remain so small that they hardly disturb.

The circle of fifths in the major-minor system 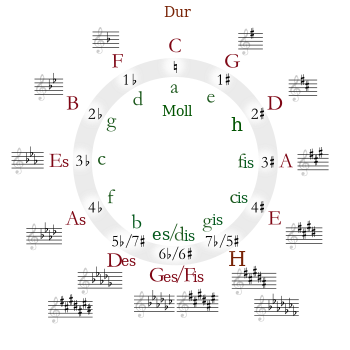 Circle of fifths in major and minor keys

Although the circle of fifths is neither factually nor historically bound to the major-minor system , it is primarily used today to illustrate the relationships between the major and minor keys .

The graphic on the right shows the major keys on the outside of the circle , which are designated in German with capital letters.

Inside the circle are the parallel minor keys, which are named with small letters. They each have the same accidentals as the associated major keys.

The graphics can be seen that for a progression in the cycle of fifths with each key, a signed add occurs or disappears.

The necessary enharmonic mix-up is usually made between F sharp and G flat major in order to keep the number of required accidentals small. The reinterpretation could, however, also be carried out at any other point in the circle of fifths. In principle, every flat key could also be noted as a sharp key and every sharp key also as a flat key. There is a simple connection between enharmonic keys in terms of their accidentals:

The accidentals are added successively in a fifth apart, with the sharp keys progressing upwards (clockwise). The order of the notes to be provided with a ♯ (F, C, G, D, A, E, H ...) can also be read in the circle of fifths due to the distance between fifths, if you start at F and continue clockwise. (The crosses ( ♯ ) increase tones by a semitone step):

Numerous sayings have been invented to help you remember the order of the major keys with sharps signs in the circle of fifths, for example:

G eh D u A lter E sel H ol Fis che (Instead of the word “Esel”, “Emil” can be used to avoid the risk of confusion with the note “Es”.)

(also works: G erda D enkt A n E in H OHES Fis Since lighter at the other saying F-Dur (is mistaken because of fish) with F # major.)

The movement of the keys as well as the addition of the accidental in the interval between fifths, which force a lowering of the notes, takes place in the ♭ keys downwards :

Here, too, the order of the notes to be provided with a ♭ (H, E, A, D, G, C, F, ...) can be read off based on the distance between fifths in the circle of fifths, if you start at B and continue counterclockwise.

Numerous sayings have been invented to help you remember the order of the major keys with a flat key in the circle of fifths, for example:

Keys with more than six accidentals

The series of sharp and flat keys could be continued as desired, with the sharp keys, for example: C sharp major with seven  ♯ , G sharp major with eight  ♯ to ice major with eleven ♯ etc. But that's not just about  the notation very confusing; further increases in already heightened tones only lead to tones that were already there in the sound image.

Therefore, it utilizes the phenomenon of aural equality different designated tones to enharmonic : instead of the increasing complexity of sharp keys to use the corresponding, equal sounding ♭ -Tonarten, as instead Gis major (8  ♯ ) As-Dur (4  ♭ ). Or, to stay with the example of the key “ice major”: Instead of eleven  ♯ , F major only needs a single ♭ .

Keys with more than six accidentals are almost never used when it comes to choosing the basic key of a piece of music. Bach's use of C sharp major (7  ♯ ) in the Well-Tempered Clavier is rare. However, in the course of a piece of music it can be useful to use keys with many accidentals. So you would z. For example, with a brief modulation from E major (4  ♯ ) to the upper mediante G sharp major (8  ♯ ), keep the notation with crosses in order to clarify the harmonic relationship. Only when a longer stay in the new key is sought is it common to remove the old accidentals and replace them with the simpler notation of the enharmonic key (in this case A flat major with 4  ♭ ).

Application of the circle of fifths to modal keys

Circle of fifths with modal keys

The modal scales that emerged from the church tones (modes), which also include the scales belonging to major ( Ionic ) and natural minor ( Aeolian ), can be derived from the circle of fifths. To do this select seven each neighboring circle of fifths sounds and sorts them then as to that they in Sekundabstand consecutive. For example, to get all scales with the root C, you apply this procedure to all seven-tone circle-fifths that contain the C. The result is shown in the following table:

In the table "same", that is listed on the same tone-based keys, the major sex keys with a large C, the minor sex are marked with a small c. The circle representation on the right shows parallel keys: The keys on a certain radius have the same accidentals.

Determination of the fifth

The circle of fifths can also be used to determine the size of the width of the fifths. If one assigns its position in the circle of fifths to each tone of a tone group, the greatest distance between two tones can easily be read in fifths.

Compositions with special reference to the circle of fifths

The realization of the circle of fifths with the help of tempered moods and the possibility of unrestricted use of all keys was reflected in compositions which exploit the possibilities of transposition and modulation in a special way.

The following compositions modulate through all keys of the circle of fifths.

Examples from rock / pop music: At the end of the 1970s, the French percussionist Pierre Moerlen played some pieces that moved through the circle of fifths, among others. a. with his brother Benoît and the Oldfield siblings.

Synesthetic representations of the circle of fifths

Of synesthetic associations were between synesthesia and music produced. Accordingly, the levels of the circle of fifths have been associated with color ideas in many ways, although the color assignments can differ from case to case. Here are some examples: