The swing as a hanging seat

A swing ( Niederd. Schukel , Bavarian Hutschn , Swabian Hosche , Bern German Rytiplampi , Central Swiss Rytiseili , East Swiss Gireizli ) is a hanging seat with which you can swing back and forth. Swings are often found in children's playgrounds and in the garden; they are also in the room. The swing takes place by stretching and bending movements with the arms and legs or by pushing off from a fixed point. There are swings for children and adults.

The ancient Greek rocking festival ( Aiora ) had cultic significance during the grape harvest .

If a swing is deflected from its rest position, it swings back and forth a few times until the frictional forces stop its movement. In order to maintain or even intensify the rocking movement, physical work must therefore be performed by the rocking person . Such an active rocking is in the physical sense a driven pendulum . Two different methods of energy supply are used: Parametric excitation by shifting the center of gravity and external excitation by generating a torque .

Energy supply by shifting the center of gravity

The procedure consists in shifting the center of gravity of one's own body during the passages of the lowest point upwards towards the suspension point and back again in the moments of standstill at the turning points. This method is used in particular when swinging while standing, crouching at the turning points and straightening up again at the lowest point. When straightening up, work must be done against gravity and centrifugal force . The latter causes an energy supply, which leads to an increase in speed at the lowest point and thus drives the pendulum movement.

The procedure only works when the swing is already swinging and becomes more effective as the amplitude of the swing increases. The energy supply is most effective when the center of gravity is raised exactly at the lowest point, because at this moment the centrifugal force and thus also the work to be done is at its maximum. In practice it is sufficient to distribute the increase in the center of gravity over the entire phase of the pendulum movement from one turning point to the next. When commuting while sitting, this happens during the forward phase of the pendulum movement, whereby the person moves from the supine position to the upright sitting position and thus raises the body's center of gravity. During the backward-looking phase, the upright sitting position is usually maintained so that no energy is supplied.

This conversion of work done into kinetic energy through mass displacement can be explained by conservation of angular momentum . At the lowest point of the pendulum movement, only forces act in the direction of the axis of rotation. The angular momentum therefore remains almost constant for a moment in this phase, even if the mass is shifted towards the pivot point. This shift corresponds to a decrease in the moment of inertia of the system. Since the angular momentum is the product of the moment of inertia and the angular velocity , the angular velocity must increase. This is like a pirouette, in which the rotational movement is accelerated by shifting the mass towards the pivot point ( pirouette effect ).

Energy supply by rotating the body

The transition between sitting upright and lying on your back corresponds not only to a shift in the center of gravity, but also to a rotational movement of the body with the rocking board approximately as a rotational axis . In practice, a large part of this rotary movement is performed at the reversal point, especially at the rear. The initiation of such a rotary movement corresponds to the generation of an angular momentum. Because of the conservation of angular momentum, the angular momentum of the body rotation must therefore be compensated for by a second one. However, only a turning movement of the pendulum as a whole comes into question. Since it has to be opposite to the rotation of the body, it is one that lifts the swing a little at the reversal point and thus increases the pendulum movement. As soon as the person's rotational movement is ended after the turning point, this corresponds to an angular momentum in the opposite direction, which is transmitted again to the swing, now in the opposite direction, and the pendulum movement is now amplified again downwards.

This procedure can also be used if the swing is not yet swinging. It is therefore possible to actively swing in a stretched position by moving your upper body forwards at the front reversal point and backwards at the rear, which corresponds to a rotational movement of the body. It is thanks to this drive through the exchange of angular momentum between the body movement and the swing as a whole that you can initiate a swinging movement on a swing in a state of rest without being pushed by another person. This is not possible with the above-described method of simply shifting the center of gravity.

Swings as rides and in the circus

Swing as an amusement ride at a fair

There are also numerous rides at carnivals with swings. The drive can either be done by the passenger (small ship swing ) or by machine. The mechanical drive is often done electrically with the help of a stationary air-filled tire that runs along the underside of the passenger gondola as soon as it passes over it. By switching the rotary movement, the swing amplitude is increased.

In the circus swings hang freely on ropes or chains, like the swing or suspension corner, which is called the trapeze . Similar to the sling board , a special swing construction is also used in artistry . Two people stand on a board that is hung up as a swing. A flat, wedge-shaped platform is installed at one end of the board to allow a safe jump. As with the ship swing, the pivot point is several meters above the board. After building up enough momentum, one of the people jumps off at the highest point and can perform appropriate somersaults on their way through the air by using the further impulse .

Hugo Kükelhaus has developed several swings for his field of experience of the senses in order to make pendulum oscillations physically, emotionally and socially tangible.

The pendulum stone is another instrument for sensory perception for children and adults based on the Kükelhaus concept. The free-swinging rock is suspended on a steel cable from about 5 to 8 meters high pyramid-shaped beams and offers a seat for one person (or two children). He makes the calm, inert mass and its kinetic energy tangible and “inescapably sets the sensation block of all those involved in vibration. Life is vibration. ”(Kükelhaus). They are used in education for the disabled, in fields of experience or, in some cases, in exercise areas for senior citizens .

The rocking movement should be moderate and circular. The rocking person concentrates on their internal body awareness with their eyes closed. It can be possible to consciously and completely hide the perception of the environment and only hear your own breath. It has been medically proven to have a calming effect and promote concentration, especially in young people and the disabled. The pyramid-shaped suspension of the circling pendulum also stimulates esoteric symbols of force fields. 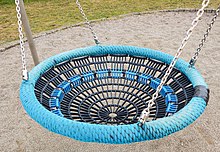 A net swing or a rocking bed or a bird's nest swing or a swing net is a net in which several people can sit.

No swings in the real sense are also rocking stones called Wackelsteine . These are large blocks of stone that, despite their mass, balance easily on their base.