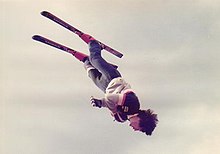 The somersault ( Italian jump; plural : somersaults or somersaults) is an element of different sports and describes a free flip around the transverse axis of the body .

Animation of a forward somersault 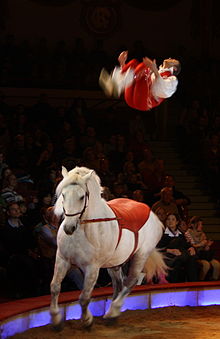 Somersault on a horse in a circus performance

Acrobatic exercises with somersaults are already documented from antiquity with corresponding pictures on vases. The biomechanics of the jumps, especially the different somersaults, was first described and analyzed by Archangelo Tuccaro (1599). The acrobatic execution of the somersault is considered relatively easy. A run-up, then a small jump forward to get some momentum, and now the arms are thrown down in front of the body. It will jump off as soon as you are about to stand upright. The legs should be pulled as far as possible and also pushed a little apart so that the jumper does not accidentally hit his nose with his knee.

One variant is the salto long jump, where a large jump distance is important.

Learning and practicing the forward flip implies risk of injury. At the beginning you don't have a feel for the landing and often stretch your legs too early or too late. Small people find the somersault easier than tall people; they have a more favorable “force to mass” quotient. Similarly, slim people find it easier than fat people. Young people have more elastic bones than older people. The harder the ground, the greater the deceleration forces when landing. There is a sprung floor in gyms ; this dampens the landing somewhat. Lawn on sports fields does not significantly dampen landing.

Backflip before the Omo in Ethiopia .

The backflip is considered to be easier than the forward somersault because of its sequence of movements; regardless of that, many find it difficult to jump “backwards”. The athlete jumps off on both legs with a slightly bent upper body and at the same time swings his arms behind his head. The body is brought into the back position with the movement of the arms. During the subsequent climbing phase of the body, the head is fixed in the extension of the spine, and the arms are also fixed behind the head. Towards the end of the gain in height, the legs are tucked in and the body rotates around the axis of rotation . The landing is initiated by opening the legs and hips back and down and stretching the arms diagonally forward. If you haven't turned fast enough, you land in the front position and can usually cushion the landing with your arms.

There are different shapes and variations of somersaults, for example somersaults with several screws in gymnastics or multiple somersaults when jumping in the water. Rolls over are performed in various sports .
Sports in which humans do the somersault:

Sports in which the person hits the somersault with a piece of sports equipment: